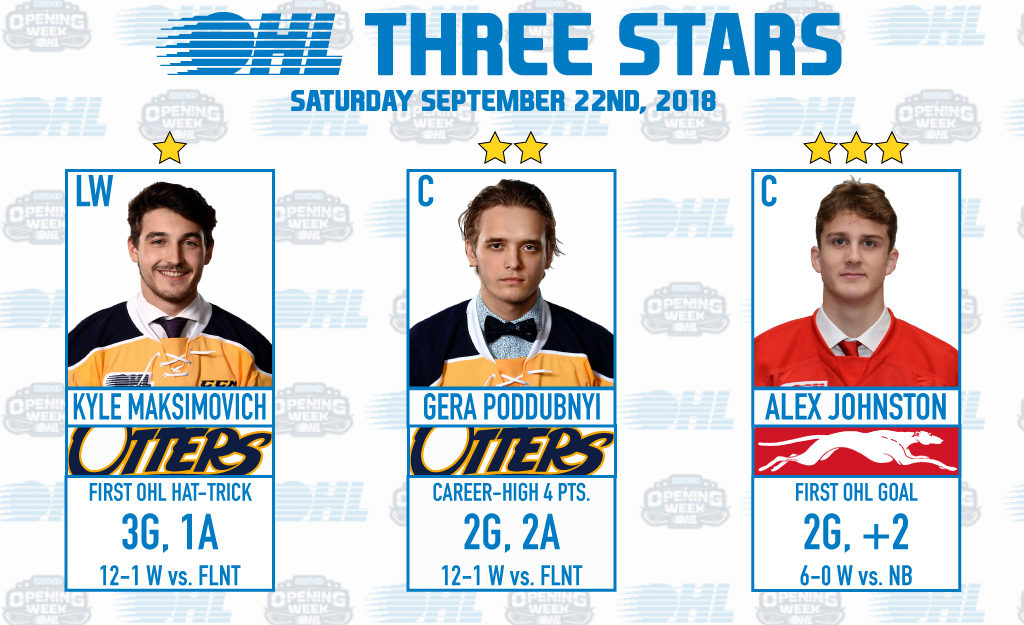 There was no shortage of offence across the OHL on Saturday. The Erie Otters duo of Kyle Maksimovich and Gera Poddubnyi headlines the Three Star selections while Soo Greyhounds newcomer Alex Johnston also made an impact.

1ST STAR: KYLE MAKSIMOVICH (ERIE OTTERS):
A name fans may get accustomed to seeing in this slot throughout the season, Erie Otters overage captain Kyle Maksimovich, believe it or not, started his fifth OHL season with his first career hat-trick. The former OHL champion led the charge in Erie’s 12-1 bludgeoning of the Flint Firebirds on Opening Night at Erie Insurance Arena as the Otters scored an incredible eight third period goals. All of Maksimovich’s goals came in the final frame as he recorded his hat-trick within a span of 15:09. Maksimovich’s big night came before a crowd of 4,269 in the Flagship City.
• GAME HIGHLIGHTS

2ND STAR: GERA PODDUBNYI (ERIE OTTERS):
Third-year forward Gera Poddubnyi recorded a career-high four points as the Otters trounced visiting Flint in their home opener. Interestingly, Poddubnyi and the aforementioned Maksimovich both registered four points whilst playing on different offensive units. The 6-foot-3 forward from Sarov, Russia manned the wing on Saturday and sported #90 for the first time in his OHL career after wearing #39 for the past two seasons.
• GAME HIGHLIGHTS

3RD STAR: ALEX JOHNSTON (SAULT STE. MARIE GREYHOUNDS):
Soo Greyhounds rookie Alex Johnston scored twice in a 6-0 home opening victory over the North Bay Battalion to merit OHL third star recognition on Saturday. Johnston connected with fellow rookie Rory Kerins on two occasions as the Greyhounds rebounded from a loss in Saginaw to open the season on Wednesday. A Stittsville, Ont. product, Johnston was a sixth round pick by Sault Ste. Marie in the 2017 OHL Priority Selection. He spent last season with the Kanata Lasers Jr. A club of the CCHL.

flint firebirds player of the week
OHL 'On the Run' Player of the Week: Tyler Tucker
22 hours ago