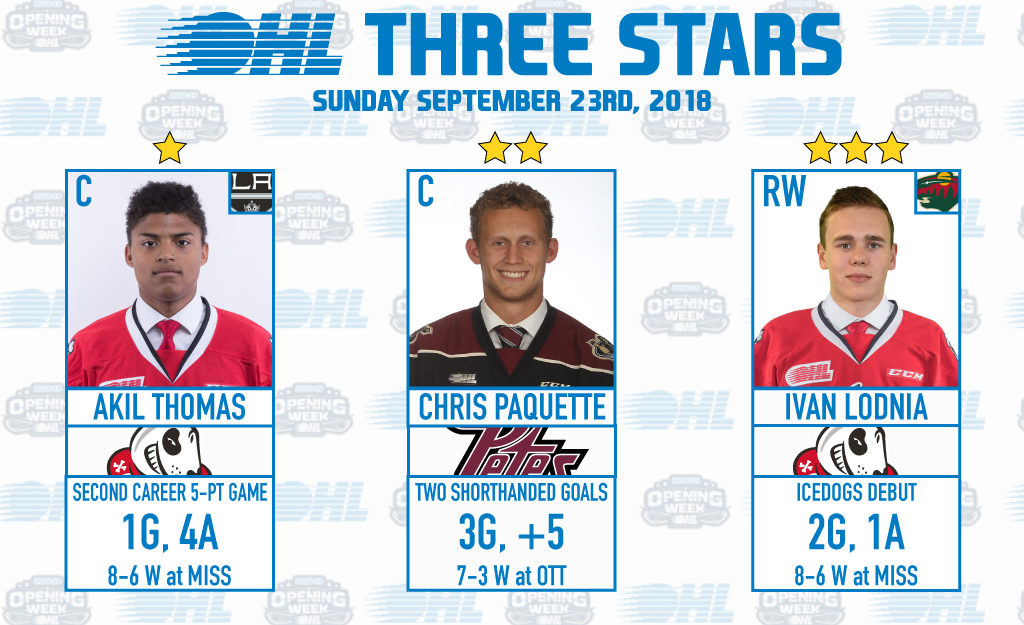 OHL Opening Week came to an explosive close on Sunday afternoon as the Niagara IceDogs and Peterborough Petes both scored early and often to claim victory. A total of 24 goals were scored over two games on Sunday, leading to a trio of top performers recognized as OHL Three Stars.

1ST STAR: AKIL THOMAS (NIAGARA ICEDOGS):
Akil Thomas registered five points for the second time in his OHL career, scoring once while adding four assists in an 8-6 season-opening win over the Mississauga Steelheads. A second round pick of the Los Angeles Kings this past summer, Thomas was one of many bright spots in the Niagara lineup on Sunday as the highly touted Dogs got their season started off right. Thomas had 59 assists last season and with four in his first game of 2018-19 the sky is the limit for him in that department moving forward.
• GAME HIGHLIGHTS

2ND STAR: CHRIS PAQUETTE (PETERBOROUGH PETES):
A close second, Peterborough Petes overage veteran Chris Paquette recorded his second OHL hat-trick, burying a pair of shorthanded goals in a 7-3 road win over the Ottawa 67’s. Paquette becomes the first Petes player to score two shorthanded goals in a game since Eric Staal did it back on Sept. 26, 2002 against Mississauga. A former fifth round pick of the Tampa Bay Lightning in 2016, Paquette returns for an overage season where he’s made an early impression, recording five points (4-1–5) through his first two games.
• GAME HIGHLIGHTS

3RD STAR: IVAN LODNIA (NIAGARA ICEDOGS):
Minnesota Wild prospect Ivan Lodnia scored twice and added an assist in his Niagara IceDogs debut to earn third star honours for Sunday. Lodnia scored the first goal of the IceDogs season with 3:10 remaining in the opening period, a marker that would be the first of eight for his team on the afternoon. The 19-year-old former OHL champion had 59 points (22-37–59) in Erie last season. Playing on a line alongside Akil Thomas and Philip Tomasino out of the gate, Lodnia’s totals in Niagara could well exceed those of last season.
• GAME HIGHLIGHTS