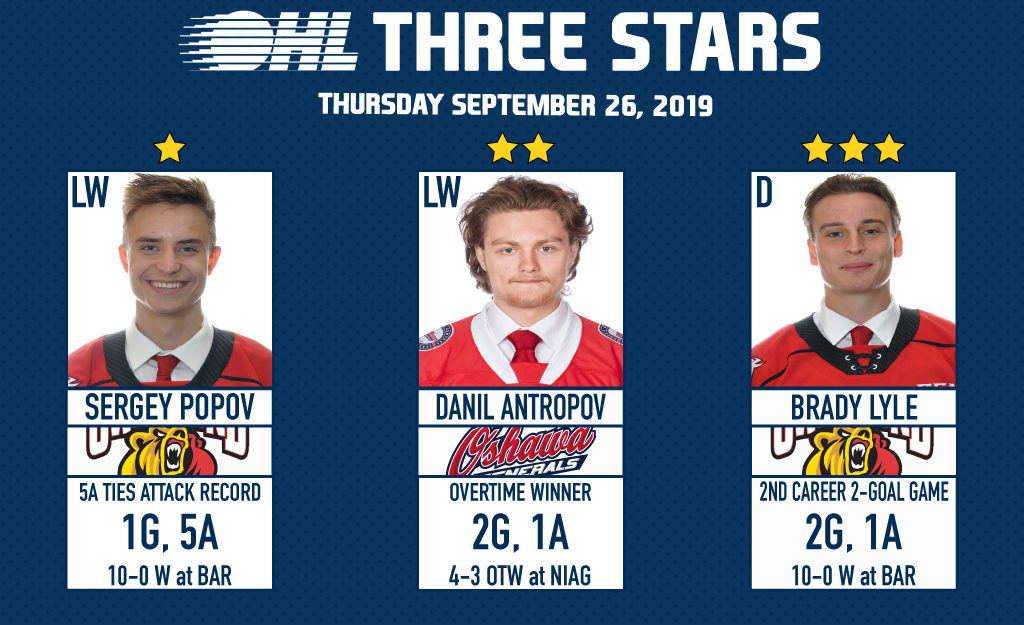 1ST STAR: SERGEY POPOV (OWEN SOUND ATTACK) – 1G, 5A
Sergey Popov tied an Owen Sound Attack franchise record with five assists as the Bears buried the Barrie Colts 10-0 on the road. Popov added a goal for good measure, giving him a career-high six points, one shy of tying a franchise mark. Popov drew assists on each of Owen Sound’s first three goals of the night before tacking on additional helpers in the third period along with his first goal of the season. The 19-year-old from Korolev, Russia recorded 25 points (10-15–25) over 47 games between Owen Sound and London last season.
• HIGHLIGHTS

2ND STAR: DANIL ANTROPOV (OSHAWA GENERALS) – 2G, 1A
Fourth-year veteran Danil Antropov scored twice and added an assist on Thursday in Niagara as the Generals defeated the IceDogs 4-3 in overtime. Antropov was in the right place at the right time to tap the game winner over the goal line with an assist from Jacob Winterton on the play. The Generals improve to 2-0 thanks to Antropov’s big night as the 18-year-old looks to build off his 52 points (15-37–52) over 66 games a year ago.
• HIGHLIGHTS

3RD STAR: BRADY LYLE (OWEN SOUND ATTACK) – 2G, 1A
Owen Sound Attack defenceman Brady Lyle recorded his second career two-goal outing as the Owen Sound Attack won big by a score of 10-0 in Barrie. Lyle scored in the first and third periods, adding an assist on rookie Ethan Burroughs’ first career OHL marker. The overage defenceman from North Bay, Ont. is embarking on his fifth OHL season after putting up 41 points (11-30–41) with the Attack in 2018-19. He recently attended Training Camp with the Arizona Coyotes.
• HIGHLIGHTS