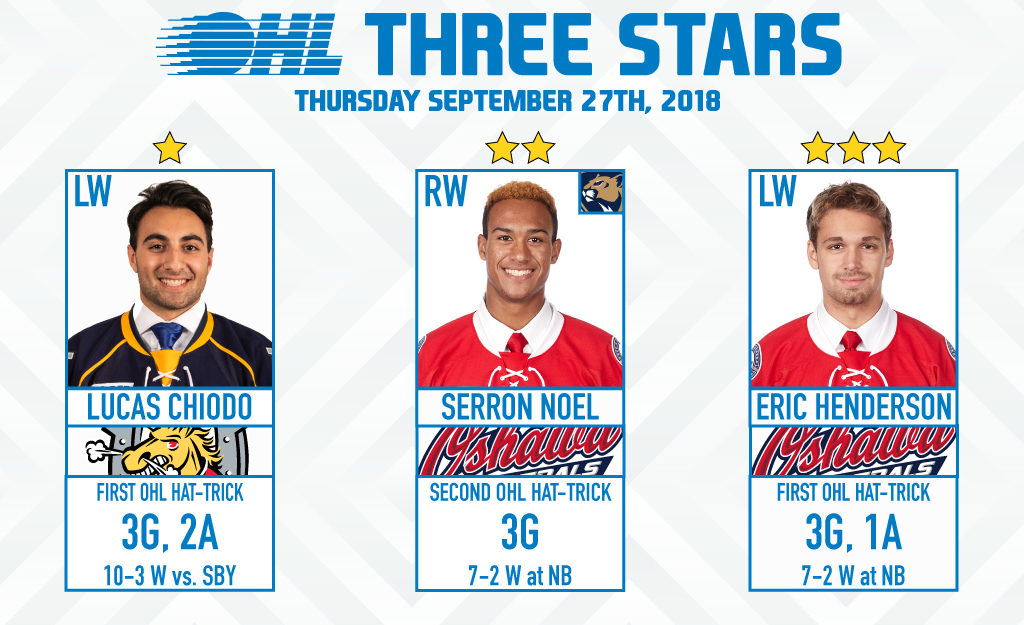 Four games, all featuring a combined seven goals or more rocked the OHL’s Thursday night schedule. Here’s a look at three of the many big-time producers to start another weekend.

FIRST STAR: LUCAS CHIODO (BARRIE COLTS):
Overage veteran Lucas Chiodo bagged his first career hat-trick, picking up a total of five points in Barrie’s 10-3 win over visiting Sudbury. Chiodo matches a career-high with five points as the Colts poured it on at home once again, putting up their second double-digit output in as many tries at the Molson Centre this season. A small package who has turned into a big-time success story, Chiodo was a 15th round pick of the Colts back in 2014 from the hometown Barrie Jr. Colts Minor Midgets. Drafted at a tiny 5-foot-2, 135Ibs., Chiodo has grown into one of the league’s consistent producers after putting up 79 points (30-49–79) in 2017-18.
• GAME HIGHLIGHTS

SECOND STAR: SERRON NOEL (OSHAWA GENERALS):
From one of the league’s smallest producers in Chiodo, we shift to 6-foot-5, 212Ib. winger Serron Noel of the Oshawa Generals who fired home a hat-trick in North Bay. The Gennies defeated the Battalion 7-2 and Noel as good from the get-go as the Florida Panthers prospect scored twice in the opening five minutes of action, completing the hat-trick 6:21 into the second frame. The big man from Ottawa showed how many different ways he can burn the opposition, scoring on three very different plays. Noel’s 28 goals last season were just a glimpse of what he’s capable of in his third campaign.
• GAME HIGHLIGHTS

THIRD STAR: ERIC HENDERSON (OSHAWA GENERALS):
Noel’s overage teammate Eric Henderson takes Thursday’s third star honours with three goals and an assist to his credit. Henderson’s first OHL hat-trick comes in his 183rd career regular season game as he finished with a plus-5 rating in Oshawa’s 7-2 road win over North Bay. A former third round pick by the London Knights who had a productive Jr. B career prior to joining the Generals in 2015-16, Henderson entered Thursday’s action with 100 career OHL points. He and Noel become the first Generals duo to each record hat-tricks in a single game since 2006-07.
• GAME HIGHLIGHTS