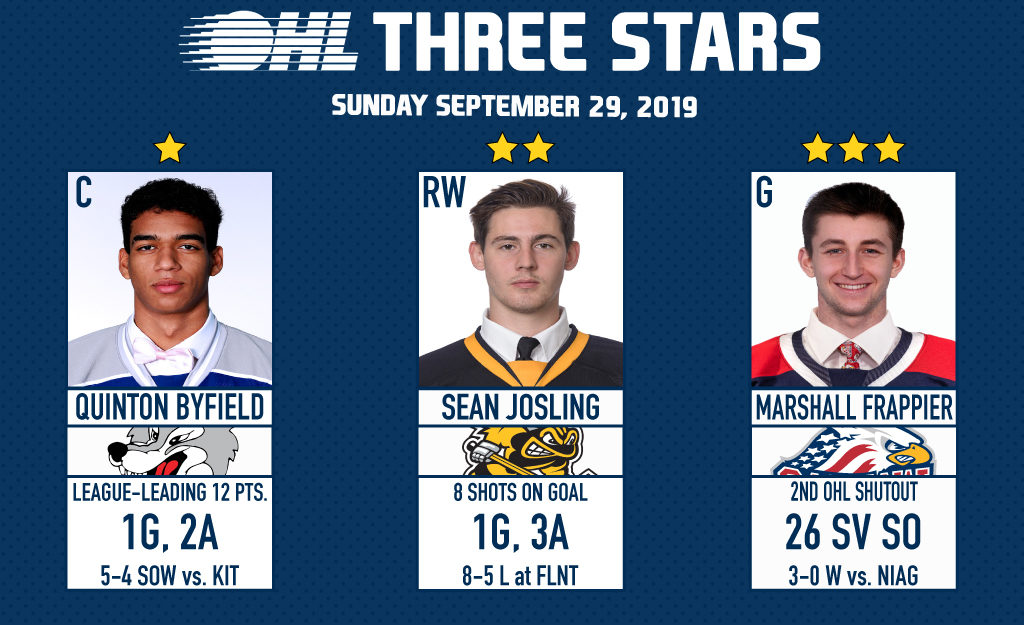 1ST STAR: QUINTON BYFIELD (SUDBURY WOLVES) – 1G, 2A, SO GOAL
Quinton Byfield continued a five-game point streak, finding the back of the net and adding two assists before scoring a shootout goal in a 5-4 Wolves victory over visiting Kitchener. The 6-foot-4, 215Ib. centre went 8-for-17 in the faceoff circle and was a plus-2 on the afternoon, wrapping up the weekend as the OHL’s leading scorer with 12 points (6-6–12) over five games. The first overall pick of the 2018 OHL Priority Selection is already considered a top prospect for the 2020 NHL Draft after winning the OHL’s Rookie of the Year honours last season.

2ND STAR: SEAN JOSLING (SARNIA STING) – 1G, 3A
Overage winger Sean Josling was busy on Sunday afternoon, recording a goal and three assists as the Sarnia Sting fell 8-5 in Flint. Josling was in on four of Sarnia’s five goals, registering eight shots on goal as Sarnia fell to 0-3 on the season. Josling’s big performance comes after a pair of games being held pointless. The 20-year-old from Toronto, Ont. is in his fourth OHL season after recording 52 points (22-30–52) in Sarnia last year. He recently attended Rookie Camp with the Chicago Blackhawks.
• HIGHLIGHTS

3RD STAR: MARSHALL FRAPPIER (SAGINAW SPIRIT) – 26 SV SO
Marshall Frappier‘s Saginaw Spirit debut couldn’t have gone any better. The 19-year-old stopped all 26 shots that came his way as the Spirit defeated visiting Niagara 3-0. Frappier, who was acquired from the Kingston Frontenacs earlier this month, is in his third OHL season after originally being a sixth round pick of the Sudbury Wolves in 2017.
• HIGHLIGHTS