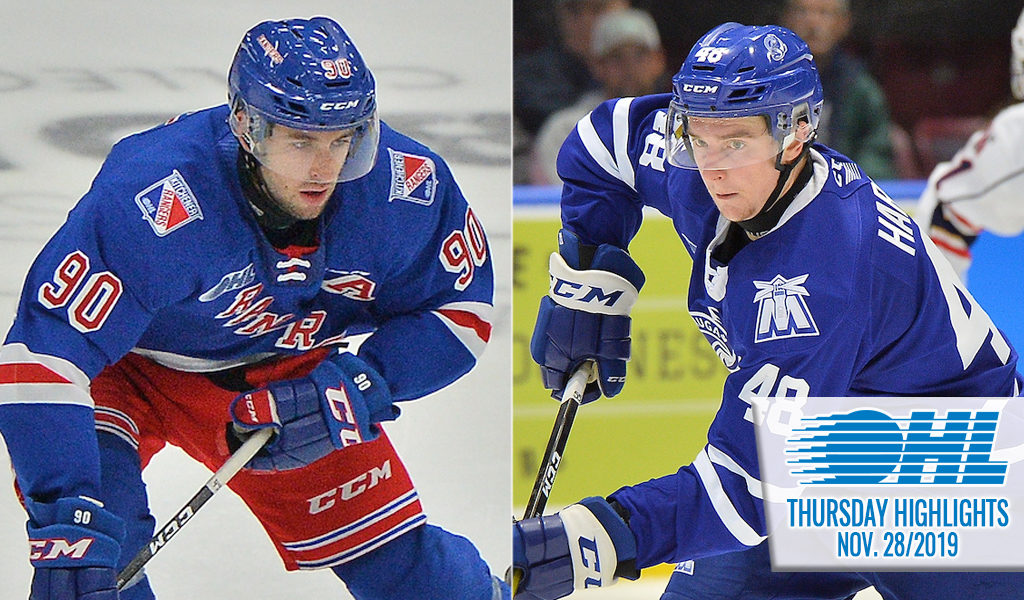 KITCHENER 5, ERIE 4 SO
Mike McKenzie earned his first OHL coaching win as the Kitchener Rangers edged the Erie Otters 5-4 in a shootout. The Rangers snapped a four-game slide as rookie Simon Motew (1) got things going early on with his first career OHL goal. Erie’s Maxim Golod (11, 12) answered minutes later with his first of two on the night. Back and forth goals in the second period would keep things tied up at three, and another goal each in the final twenty would send things to overtime at 4-4. Liam Hawel would eventually score the lone shootout goal, handing the Rangers their eighth win in a now 8-10-2-2 season. The Otters are now 0-for-11 in shootout attempts and fall to 11-7-2-6. Their single point ties them with the London Knights for 30 points on the season as they remain in the Midwest Division’s middle spot.

MISSISSAUGA 7, OSHAWA 4
The Mississauga Steelheads also snapped a four-game losing skid with a 7-4 road win over the Oshawa Generals at Tribute Communities Centre. Oliver Suni (8) got the Gens on the board early, but the Steelheads didn’t waste any time turning things around with goals from Richard Whittaker (7), Calvin Martin (7), and NHL Draft hopeful James Hardie (8, 9) to round out the first period. Ryan Gagnier (3) opened the second period scoring to cut Mississauga’s lead to 3-2, but Dallas Stars prospect Thomas Harley (11) widened the gap. Two quick third period goals from Daniel Walker (3) and Kyle Maclean (4) tied things up at four, but second-year Steelhead William Portokalis (3) pushed his team ahead once again, and a couple of empty netters from Hardie and Keean Washkurak (9) would ultimately win it for Mississauga. The Generals’ seventh loss of the season drops them to 16-7-0-1, while Mississauga’s eighth win keeps them seven points above the North Bay Battalion at fourth place in the Central Division.

PETERBOROUGH 6, NORTH BAY 1
The Peterborough Petes earned their slot back atop the East Division as they dominated the North Bay Battalion 6-1 on home ice. Rookie Mason McTavish (13, 14) opened the scoring 5:47 in, and goals from Zach Gallant (12), Max Grondin (6), and John Parker-Jones (4) put the Petes up 4-0 after twenty. Cameron Butler’s (8) third point of the night put the Petes up by five, and a second goal from McTavish would give them a 6-goal lead. North Bay’s Nick Grima (2) scored with just 13 seconds left on the clock to spoil Tye Austin’s shutout. Battalion netminder Christian Cicigoi faced 47 shots as the Petes jump to 18-6-1-1, handing North Bay their 20th loss of the season. The Battalion remain at the bottom of the standings at 5-20-0-0.