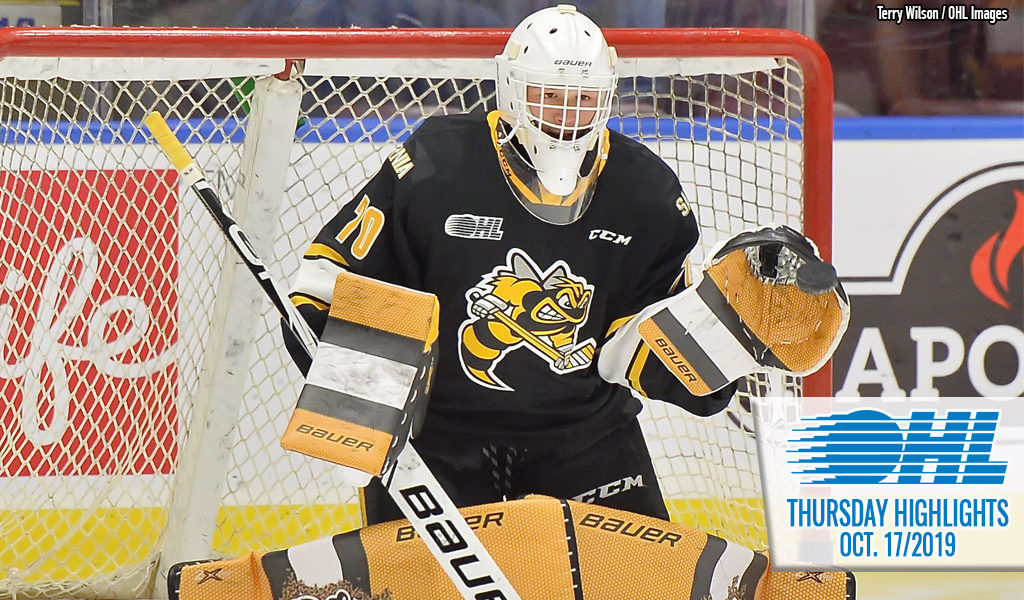 SARNIA 5, BARRIE 1
Seventh overall OHL Priority Selection choice Benjamin Gaudreau’s long-awaited OHL debut didn’t disappoint. The rookie goaltender made 49 saves, guiding the Sarnia Sting to their first win of 2019-20 as they defeated the Barrie Colts 5-1 on the road. Barrie staked out a 1-0 lead on a goal from defenceman Tyler Tucker (1) but Sarnia would score the next five unanswered, with a pair coming from overage winger Sean Josling (3, 4). Ryan Roth (5), Jamieson Rees (1) and Calvin Martin (5) also scored for the Sting as they went 2-for-5 on the power play and won despite being outshot 50-24. Gaudreau’s first OHL win was a memorable one as the Sting snapped a seven-game slide. Barrie falls to 5-3-0-1.
GAME CENTRE

ERIE 7, NIAGARA 3
The Niagara IceDogs rallied back from down 3-1 to make it interesting before the Erie Otters ran away with a 7-3 road win in the third period. Erie scored four third period goals to pull away for good as 2020 NHL Draft prospect Jamie Drysdale (3, 4) scored twice from the back end and added an assist to earn first star honours. Chad Yetman (9), Brendan Hoffmann (1), Mathew MacDougall (1), Emmett Sproule (3) and Danial Singer (2) added Erie goals while Maxim Golod and Connor Lockhart both recorded two assists. Kyen Sopa (8), Lucas Theriault (2) and Jonah De Simone (2) scored Niagara goals as the IceDogs were outshot 42-33. Daniel Murphy earned the win for Erie with a 30-save outing while Niagara’s Tucker Tynan made 35 saves in defeat. The Otters improve to 6-4-0-0 through their first 10 games while Niagara suffers a third straight loss, falling to 3-4-2-1.
GAME CENTRE

WINDSOR 7, FLINT 5
A high-scoring back-and-forth tilt when the way of the Windsor Spitfires in pink on Thursday. The Spits downed the Flint Firebirds 7-5 on home ice as Nashville Predators prospect Egor Afanasyev (4, 5) tied things with six seconds left in the second period before Windsor outlasted Flint with three goals in the third. Afanasyev scored twice and added an assist for first star honours while Tyler Angle (7) had a goal and two helpers. Kyle McDonald (4), Curtis Douglas (4), Luke Boka (4) and Cole Purboo (2) added singles for Windsor while Will Cuylle and Daniel D’Amico each finished with two assists. Florida Panthers prospect Vladislav Kolyachonok (2, 3) scored twice from the back end for Flint while Belarusian countryman Evgeniy Oksentyuk racked up four assists. Jake Durham (6) and Ty Dellandrea (4) also scored for Flint while defenceman Owen Lalonde (1) lit the lamp in his Firebirds debut. Rookie netminder Xavier Medina made 33 saves in the victory while Flint’s Anthony Popovich took the loss with 34 saves to his credit. Windsor improves to 6-3-1-0 while Flint falls to 5-3-0-0.
GAME CENTRE

PETERBOROUGH 4, HAMILTON 3
The Peterborough Petes won their long-awaited home opener on a pair of quick third period goals off the sticks of Nick Robertson (12) and Zach Gallant (3). Peterborough led 2-1 after two periods before Hamilton pulled ahead 3-2 midway through the third frame. Robertson and Gallant put the men in maroon ahead for good as they improved to 7-3-0-0 before a Thursday night crowd of 3,719 at the newly renovated Memorial Centre. The Petes outshot the Bulldogs 38-25 as Chad Denault (2) and Mason McTavish (7) also scored for the winners. Jan Jenik (6), Arthur Kaliyev (11) and Logan Morrison (3) scored for Hamilton while Liam Van Loon picked up a pair of assists. Kaliyev’s goal and assist vaulted him into the OHL scoring lead with 21 points (11-10–21) over 10 contests. Bulldogs rookie Marco Costantini made 34 saves in the loss opposite Hunter Jones who turned aside 22 to improve to 7-1 on the campaign. The Bulldogs fall to 4-6-0-0.
GAME CENTRE