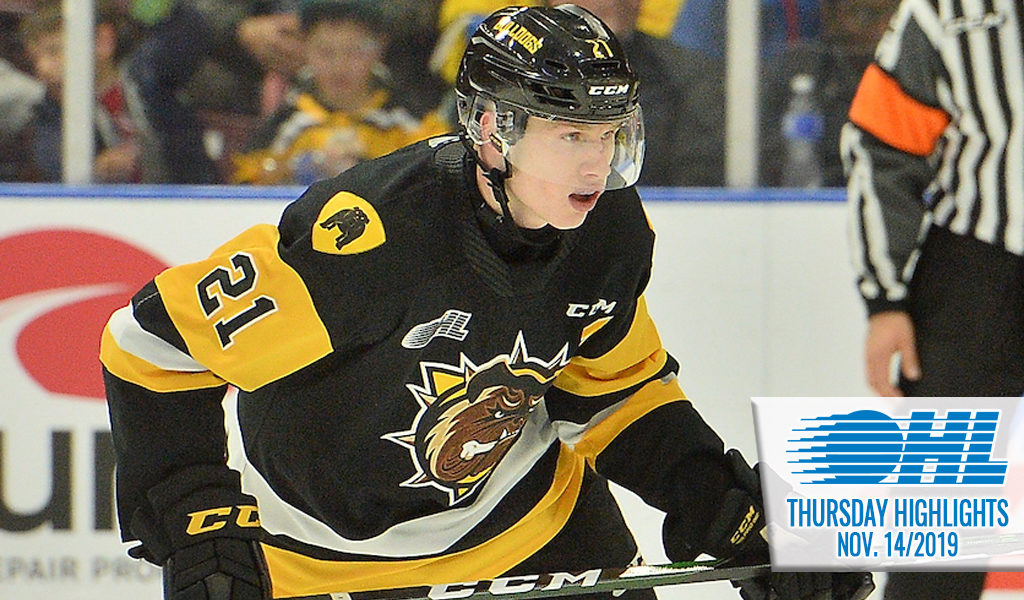 HAMILTON 5, NORTH BAY 1
A red hot Jan Jenik (13, 14, 15) led the Hamilton Bulldogs past the North Bay Battalion with five points in a convincing 5-1 victory. Three late first period goals from the dynamic duo of Jenik and linemate Arthur Kaliyev (22) had the Bulldogs up 3-0 within the first 20 minutes before Ryan Winterton (5) added another late in the second period. North Bay would finally enter the scoreboard 4:26 into the third thanks to veteran Brad Chenier (8), who now ties Matthew Struthers as the team’s top scorer with 18 points. Jenik scored another to complete his first career OHL hat-trick with less than five minutes left in the game, extending his point streak to a league-high 18 games. Hamilton netminder Zachary Roy stood tall with 35 saves in his first action since October 25th. The Battalion remain at the bottom of the Central Division, suffering an 11th straight loss to fall to 3-17-0-0 while Hamilton improves to 9-11-1-0 in the East with their first win following three consecutive losses.
GAME CENTRE

PETERBOROUGH 6, NIAGARA 5 – OT
Zach Gallant’s (7, 8) second of the night was the game winner as Toronto Maple Leafs prospect Semyon Der-Arguchintsev picked up his fourth assist on the OT winner 30 seconds into the extra frame as the Peterborough Petes knocked off visiting Niagara 6-5. The Petes overcame a 5-3 deficit in the final four minutes of the third period as rookie Mason McTavish (11, 12) scored his second of the night before blueliner Declan Chisholm (2) tied things up with 1:24 to go. Liam Kirk (12) also scored for Peterborough as the Petes outshot the IceDogs 45-24, going 3-for-5 on the power play. IceDogs rookie Tucker Tynan was kept busy as usual, making 39 saves while Minnesota Wild prospect Ivan Lodnia (8, 9) led the way with two goals and an assist. Oliver Castleman (7), Jake Uberti (4) and Philip Tomasino (11) rounded-out Niagara’s scoring while blueliner Adrien Beraldo collected an assist for his first point since being acquired by Niagara. The Petes collect at least a point in a fifth straight game, improving to an East Division-leading 14-5-1-0. Niagara holds down third in the Central with a 6-11-3-1 record.
GAME CENTRE

SAGINAW 4, OTTAWA 3
The Ottawa 67’s and Saginaw Spirit traded goals in a tightly fought match until a late goal from 2020 NHL Draft prospect Cole Perfetti (7) lifted the Spirit to a 4-3 win. Saginaw’s Camaryn Barber (3) opened the scoring 6:29 into the first, but Ottawa responded with goals from Marco Rossi (6) and Mitchell Hoelscher (13, 14). Jake Goldowski (6) evened things up for the Spirit less than a minute later, but Hoelscher’s second of the night pushed the 67’s ahead by one. The Spirit tied it up once more thanks to DJ Busdeker (4) before Perfetti got one more past Cedrick Andree with 1:12 remaining. Andree made 33 saves in the loss and newly acquired winger Adam Varga made his debut with the Barber Poles, sporting number 11. Ottawa heads to Flint for game two of their three-game weekend road trip while West Division-leading Saginaw will look for their fourth straight win Saturday afternoon in Guelph.
GAME CENTRE

BARRIE 8, OWEN SOUND 5
Jason Willms (5, 6), Ryan Del Monte (1, 2) and Jacob Frasca (2, 3) each scored twice as the Barrie Colts took down the Owen Sound Attack 8-5 on home ice. The Colts led 6-2 at one point before the Attack made things interesting in the third period but couldn’t come all the way back. Nathan Allensen (5) and Matej Pekar (14) also scored for Barrie while Pekar and Luke Bignell both racked up three assists. Aidan Dudas (10), Adam McMaster (5), Barret Kirwin (8), Daylon Groulx (7) and Matthew Philip (9) provided Attack goals as the two clubs combined for a total of five power play markers. Barrie climbs to within three points of first in the Central Division, improving to 11-6-0-1. Owen Sound sits locked in a three-way tie atop the Midwest sporting a 10-6-1-1 record.
GAME CENTRE