Thursday Highlights: Johnny on the spot 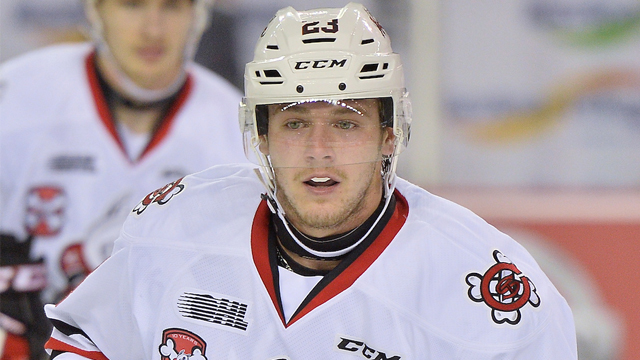 NIAGARA 6 – OTTAWA 3
Johnny Corneil (14, 15, 16) recorded his first career OHL hat-trick while sophomore Ben Jones (9, 10) had two goals and two assists as the Niagara IceDogs doubled up visiting Ottawa 6-3. Newly acquired winger Kirill Maksimov (7) had a goal and an assist in his IceDogs debut while goaltender Stephen Dhillon made 43 saves. Niagara went 2-for-4 on the power play in the win, climbing to within two points of the North Bay Battalion for the eighth and final playoff spot in the Eastern Conference. Ottawa goals came from Tye Felhaber (14, 15) while 2017 NHL Draft prospect Sasha Chmelevski (16) had a goal and an assist and won 13 of 16 faceoffs. The six goal output is the most by the IceDogs this season.
GAME CENTRE

WINDSOR 3 – KITCHENER 2 – SO
The Windsor Spitfires and visiting Kitchener Rangers treated the fans watching on Sportsnet 360 to a good one as NHL Draft prospect Michael DiPietro starred in a 3-2 shootout victory for the Spitfires. The 17-year-old goaltender turned aside 36 shots before denying all four shootout opponents he faced as Gabriel Vilardi scored the shootout winner for Windsor. Winnipeg Jets prospect Logan Stanley (4) and veteran forward Aaron Luchuk (15) had goals for Windsor in regulation while Toronto Maple Leafs draftee Jeremy Bracco registered an assist against his former club in his Spitfires debut. Philadelphia Flyers prospect Connor Bunnaman (20, 21) provided both Kitchener goals, tying things late in regulation as the Rangers went on to drop their fourth straight decision. The 26-8-4-1 Spitfires now trail first place Sault Ste. Marie by five points in the West Division.
GAME CENTRE

PETERBOROUGH 5 – OSHAWA 4 – OT
Florida Panthers prospect Jonathan Ang (17) scored 45 seconds into overtime as the Peterborough Petes overcame a late Oshawa Generals push to win 5-4 on home ice. The Petes saw a 2-0 lead evaporate as the Generals scored three times in under two minutes early in the second period. Mason Kohn (7) scored his first as a General with 1:27 left in the third period to force overtime and help earn his club a point. The OHL’s Player of the Month for December Zach Gallant (13, 14) had a pair of goals for Peterborough while Logan DeNoble (25) and Nikita Korostelev (20) also got in on the offence. Defencemen Kyle Jenkins and Matthew Timms each had three assists as the Petes improve to 23-13-1-3, just one point back of Oshawa for the Eastern Conference lead. Matt Brassard (6) and Allan McShane (8) joined Kohn in scoring their first goal as a General while Serron Noel (5) also found the back of the net. Peterborough outshot Oshawa 47-34 and improved to 3-2 against the Generals this season.
GAME CENTRE

MISSISSAUGA 2 – NORTH BAY 1
Veteran forward Jacob Cascagnette (7) scored the game winner in his Mississauga Steelheads debut, lighting the lamp with 7:02 left in the third period as the Trout took a 2-1 win in North Bay. Spencer Watson and Nathan Bastian gathered assists on the game winner while Scoley Dow (5) had a first period goal to help keep the Steelheads undefeated in regulation in six straight games. Rookie goaltender Jacob Ingham turned aside 27 of the 28 shots he faced, being beaten just once on a shot by North Bay captain Riley Bruce (1). Newly acquired defenceman Jesse Saban picked up an assist in his Battalion debut while goaltender Julian Sime made 30 saves. The Troops suffered their sixth straight loss at home but remain two points ahead of Niagara for the eighth and final playoff spot in the Eastern Conference.
GAME CENTRE