Thursday Highlights: Moncada and the Troops take down top-ranked 67’s 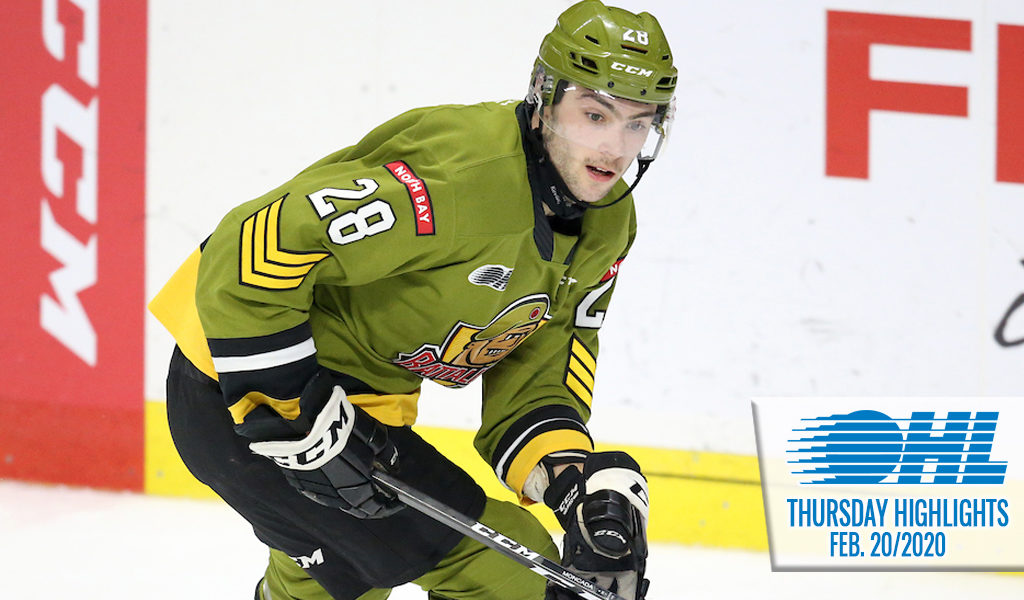 NORTH BAY 6, OTTAWA 2
Luke Moncada (30, 31, 32) completed his third hat-trick of the season, vaulting his North Bay Battalion past the league’s top seeded Ottawa 67’s by a 6-2 decision. He opened the scoring three and a half minutes in but Ottawa rookie Jack Beck (5) tied the score off a feed from NHL Draft pick Marco Rossi, who became the first OHLer to score 100 points this season. James Mayotte responded with his first OHL goal to put the Troops back in front until Jack Quinn’s 46th goal on the year evened things up again. Moncada’s second goal of the game came on a shorthanded penalty shot to reclaim the lead, tacking on to his league-leading total of seven shorthanded goals. Three unanswered third period goals from Alex Christopoulos (8), Chad Denault (4), and captain Moncada would seal the Troops’ third straight victory and fourth straight game with a point earned. Joe Vrbetic made 28 saves for another win between the Battalion pipes while Ottawa’s Will Cranley stopped 30 of 35 shots, seeing his run of 13 consecutive wins come to an end. The 67’s have now lost three straight for the first time this season and fall to 42-10-0-1 atop the league standings. The Battalion earn three straight wins for the first time this season and see their record improve to 14-38-3-0 as they continue to round out the bottom of the Central Division.
GAME CENTRE

LONDON 4, WINDSOR 2
Liam Foudy’s three-point night helped the Knights officially clinch their spot in the postseason for the 19th consecutive year in a 4-2 win over the rival Windsor Spitfires. OHL veteran Cole Purboo (20) netted the first goal of the game following a scoreless opening 20 minutes, and two goals off the sticks of Ottawa Senators draftee Jonathan Gruden (27) and Chicago Blackhawks prospect Alec Regula (22) gave London the advantage. Windsor rookie Wyatt Johnston (11) evened things up to kickstart the third, but Columbus Blue Jackets pick Foudy (24) would pot the game winning goal minutes later, only to be followed up by an empty netter from Washington Capitals first rounder Connor McMichael (41). Brett Brochu’s winning ways continued as he improved to 26-6-2 in net for the Knights, stopping 36 of 38 shots. Xavier Medina rounded out the night with 30 saves on the 33 shots that came his way. Their sixth and final matchup of the season, the Knights now hold a 4-2-0-0 tally against the Spits this year, and see their overall record improve to 38-14-1-1 at the top of the Western Conference. The Spits fall for the second time in a row and drop to 32-17-5-0 in the middle of the West Division.
GAME CENTRE

FLINT 4, NIAGARA 0
The Firebirds’ hot streak lived to see its 14th consecutive game as Anthony Popovich saved all 25 shots for his second career shutout in a 4-0 blanking of the Niagara IceDogs. The ‘Birds climbed into the West Division lead thanks to a pair of goals from Evgeniy Oksentyuk (29, 30) who opened the scoring early in the first and was followed up by rookie Braeden Kressler’s sixth OHL goal. Oksentyuk earned his 30th of the season midway through the middle period and Connor Roberts (17) capped things off late in the third. Andrew MacLean faced 44 attempts in net for the IceDogs, who fall to 17-34-4-1 following a 13th straight loss. The Firebirds reclaim the top of the West Division and bump up to 36-17-1-1.
GAME CENTRE

HAMILTON 3, PETERBOROUGH 1
Marco Costantini saved 37 of the 38 shots he faced in his Hamilton Bulldogs’ 3-1 defeat of the Peterborough Petes. Liam Van Loon (3) got the Dogs up on the board midway through the first, and Toronto Maple Leafs prospect Nick Robertson evened the score with his league-leading 47th goal on the season in the following period. A couple of third period markers from Nathan Staios (5) and NHL Draft hopeful Jan Mysak (13) on the empty net would launch Hamilton to victory. Minnesota Wild prospect Hunter Jones totaled 27 saves on 29 shots as his Petes drop to 33-21-2-1 at second in the East Division. The Bulldogs maintain the fourth place slot as they climb to 24-25-6-1.
GAME CENTRE

BARRIE 6, SAGINAW 5 OT
Ethan Cardwell netted the OT winner at the 1:24 mark to send the Barrie Colts past his former club, the visiting Saginaw Spirit 6-5. The Spirit got off to a quick start thanks to goals from Dalton Duhart (12) and Josh Bloom (5), but Barrie immediately responded with three in a row from Dallas Stars prospect Nicholas Porco (9) on the power play, Ryan Del Monte (3) and Anthony Tabak (9) on a shorthanded penalty shot. Carolina Hurricanes first rounder Ryan Suzuki (15) and Minnesota Wild pick Damien Giroux (35) regained the Saginaw lead, and Barrie overager Josh Nelson (12) would trade goals with New York Islanders prospect Blade Jenkins (12) before Aidan Brown (15) would tie things up shorthanded in the middle of the third period. Cardwell would come through early in the extra frame as the overtime hero, earning the Colts their second straight win and keeping their previous 10 record at 7-2-1-0. Arturs Silovs saved 46 of 51 shots in net for Barrie, while Saginaw’s Tristan Lennox totalled 22 saves on 28 attempts. The Colts improve to 26-23-3-2 at second in the Central Division while the Spirit fall one point back of the West Division-leading Flint Firebirds with a 34-16-3-2 tally on the year.
GAME CENTRE