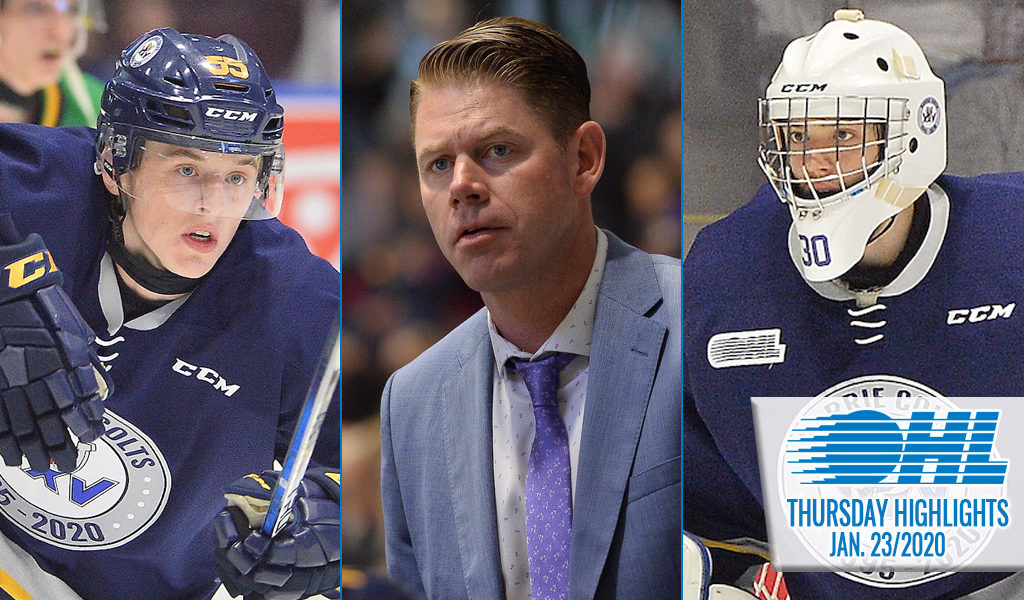 BARRIE 5, OSHAWA 0
Vancouver Canucks prospect Arturs Silovs stopped all 19 shots that came his way, earning his first OHL shutout as the Barrie Colts blanked the Oshawa Generals 5-0 in Todd Miller’s debut as head coach. NHL Draft eligible Tyson Foerster (24, 25) found the back of the net twice, with a goal from Luke Bignell (12) in between. Overager Josh Nelson (5) scored next, and rookie Brandt Clarke’s first of his OHL career wrapped up the shutout. Thursday’s win solves a six-game losing skid and helps the Colts climb to 17-21-2-2 at fourth in the Central Division. The Generals, who sit third in the East Division, see their record fall to 22-16-3-2 on the year. The two teams will meet again Sunday night for the third of four matchups this season.
GAME CENTRE

SUDBURY 8, NORTH BAY 4
Nolan Hutcheson and Macauley Carson both found the back of the net twice to help the Sudbury Wolves double up on the North Bay Battalion 8-4 Thursday night in their fifth of eight meetings this season. Goals from Owen Robinson (10) and captain Carson (14) came first before defenceman Simon Rose struck next with his second of the season to cut Sudbury’s lead in half. The Wolves scored three more off the sticks of Hutcheson (9), Blake Murray (19), and Carson (15), the latter of which was a shorthanded goal. North Bay’s Mason Primeau (9) and Brandon Coe (16) got the puck past Sudbury netminder Mitchell Weeks, before three more came from the Wolves’ Hutcheson (10), Buffalo Sabres pick Matej Pekar (19), and former Battalion captain Brad Chenier (20). The Troops earned one more from Mitchell Russell (16) to cap off the 12-goal game. Cameron Lamour stopped 36 of the 44 shots he faced in net for the Troops, while Weeks totaled 38 saves. The Wolves continue to lead the Central Division with a 23-20-1-0 record, while the Battalion continue to sit fifth at 10-31-2-0.
GAME CENTRE

NIAGARA 5, MISSISSAUGA 3
Oliver Castleman notched a pair of goals in a classic Central Division contest between the Niagara IceDogs and Mississauga Steelheads that ended 5-3 in favour of the Dogs. Richard Whittaker (16) and Liam Ham (3) gave the Fish an early 2-0 lead before Niagara scored four straight thanks to Castleman (19), Cameron Butler (14), Cameron Snow (6), Jake Uberti (11). James Hardie (23) notched one more for the Trout before Castleman’s 20th of the season came on the empty net with 17 seconds left on the clock to claim the fourth of six meetups between both clubs. The IceDogs improve to 17-21-4-1 in the middle of the division, while the Trout drop to 19-23-2-1 and sit just two points above in second place.
GAME CENTRE

LONDON 6, WINDSOR 3
Dale Hunter earned his 800th OHL win as three-point performances from Luke Evangelista and Nathan Dunkley helped the London Knights skate to a 6-3 victory over the Windsor Spitfires in front of a national Sportsnet audience. London’s Hunter Skinner (4) found the back of the net first and was followed up by Windsor’s Curtis Douglas (19), a Dallas Stars draftee. NHL Draft prospect Antonio Stranges (17) and overager Jason Willms (19) lifted the London lead to 3-1 before fellow NHL Draft eligible Will Cuylle (16) notched another for the Spits. The Knights then saw three in a row from NHL Draft hopeful Evangelista (18), Nathan Dunkley (10), and Ottawa Senators prospect Jonathan Gruden (18). A third and final Windsor goal came from Daniel D’Amico (18) in the game’s final two minutes. The shots ended at 36 on both ends of the ice, and London’s Brett Brochu earned his eighth straight win in net. The Knights have now won four in a row, effectively snapping the Spits’ three-game win skid. Their two points earned boosts the Knights’ record to 28-13-1-1, two points behind the Midwest Division leading Kitchener Rangers. Windsor falls to second in the West Division, trailing a point behind the Saginaw Spirit at 27-10-5-0.
GAME CENTRE

SAGINAW 6, PETERBOROUGH 2
Overaged defenceman DJ Busdeker registered two goals and one assist to guide the Saginaw Spirit to first place in the Western Conference with a 6-2 triumph over the Peterborough Petes. New York Islanders prospect Cole Coskey (26) opened the scoring for the Spirit before San Jose Sharks prospect Zach Gallant (24) and Toronto Maple Leafs pick Nick Robertson (32) pushed the Petes in front. The Spirit responded with five straight, starting with a shorthanded goal from Busdeker (10). Damien Giroux (28) and Blade Jenkins (9) struck next before highly touted NHL Draft prospect Cole Perfetti found the back of the net for his 25th goal of the season. Busdeker (11) added one more 23 seconds later to cap off the win. Peterborough’s Hunter Jones faced 38 shots for 33 saves in net and Marshall Frappier totaled 34 saves on the 36 attempts he faced. The Spirit hop to first in the conference boasting a 28-13-2-2 record, while the Petes remain second in the East Division and fall to 28-14-2-1 on the year.
GAME CENTRE