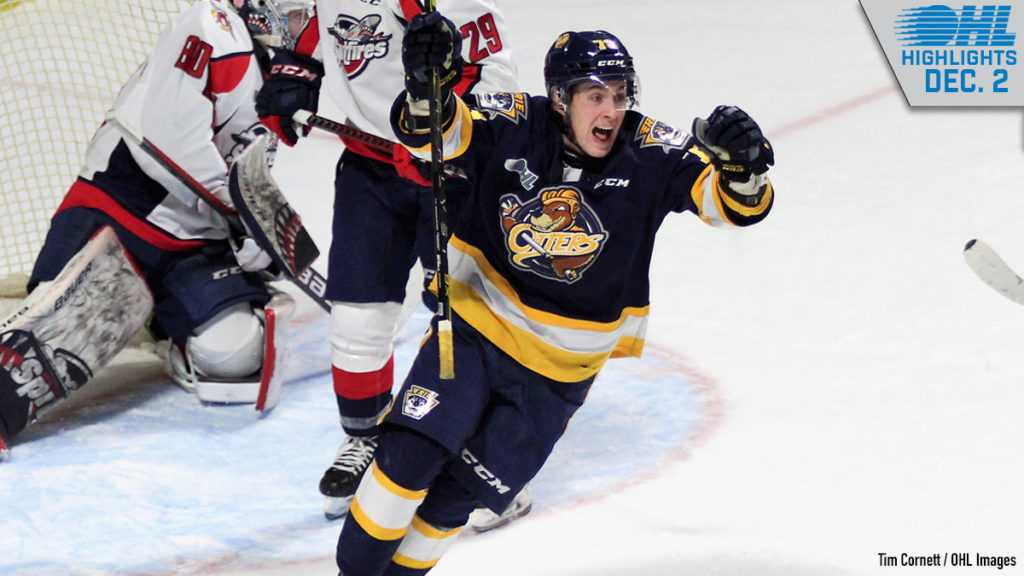 ERIE 5, WINDSOR 4 – OT
– Trailing 4-1, the Otters scored three in the third, with Daniel D’Amato tying the score with one second remaining to force overtime.
– Vancouver Canucks prospect Connor Lockhart scored the overtime winner 1:36 into the extra frame with assists from Brett Bressette and Cameron Morton.
– D’Amato earned first star honours with two goals and an assist.
– New York Rangers prospect Will Cuylle scored twice for Windsor while Dallas Stars first rounder Wyatt Johnston extended his point streak to 13 games with three assists and went 14-for-17 in the faceoff circle.
– Montreal Canadiens prospect Daniil Sobolev scored his first OHL goal for Windsor.
– There were no penalties between the two clubs, the first instance of that occurring this season.
– Nolan Lalonde made 36 saves for the win as the Otters were outshot 40-30.
– The Spitfires have now lost three consecutive one-goal games and fall to 8-8-2-2.
– Spitifres blueliner Louka Henault and forward Oliver Peer left the game with injuries.
GAME CENTRE & HIGHLIGHTS

Sweet Caroline! Crazy @ErieOtters comeback complete!@Canucks prospect Connor Lockhart (@C_lockhart73) sneaks one through on the short side as the Otters snatch one away from the Spits 🎥 pic.twitter.com/gugay64XB1

BARRIE 3, HAMILTON 2 – OT
– Beau Jelsma scored his first career game winning goal with one minute remaining overtime, coming on assists from Ethan Cardwell and Evan Vierling.
– Tai York’s first career OHL goal tied the score with 6:19 remaining in the second as the Colts overcame a 2-0 deficit.
– Recently-named OHL Defenceman of the Month Nathan Staios had a goal and an assist for the Bulldogs.
– Mack Guzda stopped 32 of 34 for the win opposite Hamilton’s Marco Costantini who made 26 saves.
– The Colts have won three in a row, improving to 11-7-2-0 in a second place tie with Mississauga in the Central Division.
– Hamilton earns a point to climb into a tie with North Bay for first in the Eastern Conference.
GAME CENTRE & HIGHLIGHTS

A big one for Beau!

Ethan Cardwell (@EthanCardwell2) finds rookie Beau Jelsma (@JelsmaBeau) busting in off the bench for the OT finish in an @OHLBarrieColts win 🎥 pic.twitter.com/LKYm1C8bQ8

NIAGARA 6, OTTAWA 1
– The Niagara IceDogs snapped a five-game slide as San Jose Sharks prospect Danil Gushchin had a goal and two assists.
– Liam Van Loon, Cameron Butler and Jake Uberti each had a goal and an assist while rookie defenceman Andrew Wycisk scored his first OHL goal.
– Vinzenz Rohrer scored the lone goal for Ottawa.
– Josh Rosenzweig earned first star recognition with 33 saves for his first win of the season.
– The IceDogs improve to 6-13-0-1.
– Ottawa drops their sixth in the last seven games, falling to 11-10-1-1.
GAME CENTRE & HIGHLIGHTS

FLINT 3, SAGINAW 0
– Ian Michelone stopped all 32 shots he faced for his first OHL shutout, marking the first time the Firebirds have shutout the Spirit in Saginaw since their first-ever matchup on Sept. 24, 2015.
– Coulson Pitre, Riley Piercey and Braeden Kressler scored Flint goals as the Firebirds climbed into a second place tie with Saginaw in the West Division.
– New York Islanders prospect Tristan Lennox made 21 saves for Saginaw in his first start since Nov. 14th.
– Both teams have 21 points in the standings, with the Firebirds holding a game in hand.
GAME CENTRE & HIGHLIGHTS

KINGSTON 6, PETERBOROUGH 5
– The Kingston Frontenacs let a 5-0 lead slip away, only to have rookie Paul Ludwinski step up with the game winner with 7:57 remaining in the third period.
– Lucas Edmonds led the way with a goal and two assists for Kingston while Shane Wright, Jordan Frasca and Francesco Arcuri each had a goal and an assist.
– Joe Carroll launched the teddy bears in Peterborough, scoring the first of five consecutive Petes goals 9:37 into the second.
– Carroll had a pair of goals on the night while Jaden Reyers and Emmett Sproule both picked up a pair of assists.
– Sproule extended his point streak to a season-high 20 games.
– Josh Kavanagh scored his first OHL goal for Peterborough.
– With Leevi Merilainen out with a day-to-day injury, Aidan Spooner made 36 saves for the win.
– The Frontenacs own the OHL’s best road record at 6-1-1-0.
GAME CENTRE & HIGHLIGHTS