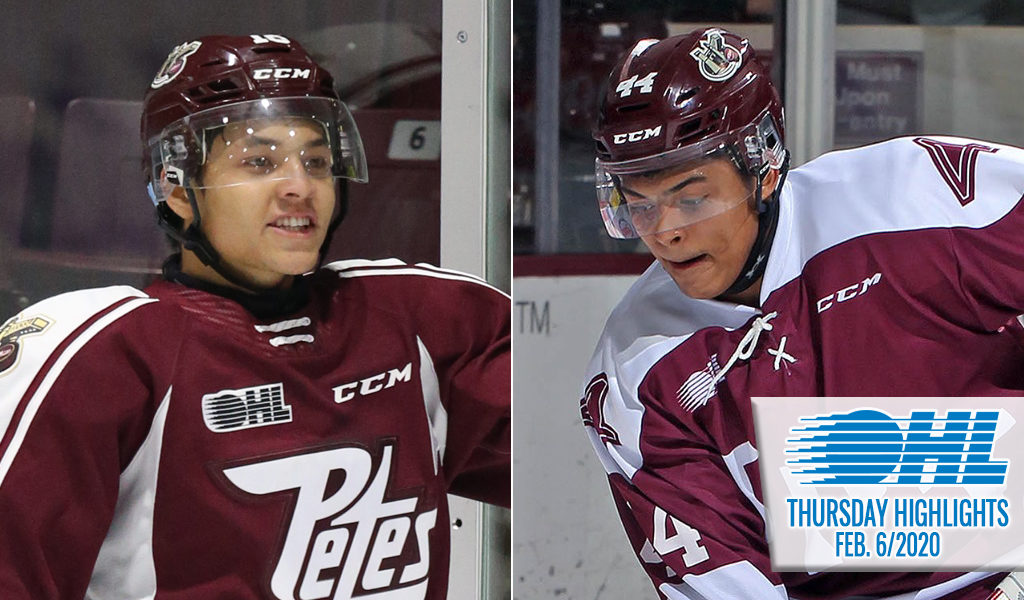 PETERBOROUGH 8, NORTH BAY 3
It was a milestone night in Peterborough, where Toronto Maple Leafs prospect Nick Robertson surpassed the 40 goal mark in a five-point performance and Akil Thomas reached 100 career goals in their team’s 8-3 toppling of the North Bay Battalion on home ice. The first goal of the game went to Winnipeg Jets pick Declan Chisholm (10), eventually followed up by an unassisted marker from North Bay’s Alex Christopoulos (7). The Petes struck with four in a row off the sticks of Brady Hinz (11), rookie Mason McTavish (28), and Robertson (40, 41), who scored his second goal shorthanded. Alex’s twin brother Paul Christopoulos (3) netted another for the Troops, before Tucker Robertson (7) and Thomas (19), a Los Angeles Kings pick, pushed the Petes to an 8-2 lead. North Bay’s Brandon Coe (17) and McTavish (29) traded final goals in the game’s remaining minutes. Robertson’s goal streak reaches its 13th game as he ties Ottawa’s Jack Quinn as the league’s leading goal scorer. The shots ended 37-33 in favour of the Petes, who pick up another much needed win to boost their record to 30-19-2-2 at second in the East Division. A fifth straight loss for the Battalion drops them to 11-36-2-0 as they maintain the Central Division’s fifth place slot.
GAME CENTRE

OWEN SOUND 11, NIAGARA 1
A Kaleb Pearson (18, 19, 20) hat-trick and a two-goal performances by Aidan Dudas (13, 14) and Brady Lyle (15, 16) pushed the visiting Owen Sound Attack past the Niagara IceDogs 11-1. Captain Dudas and Pearson were first on the board, and Cameron Butler (16) got the puck past the Attack net to give Niagara some life. Dudas responded 30 seconds later to reclaim the two-goal lead, which was then extended by eight unanswered goals. Pearson and Matthew Struthers (20) scored early in the middle frame, and Pearson completed his hat-trick in the final minute of the period with Ethan Burroughs (8) following up just 11 seconds later. The final frame saw markers from rookie Deni Goure (9), Lyle, and finally Sergey Popov (15), who capped off a five-point night. The IceDogs, who are still without top scorer Ivan Lodnia as well as Cam Peters, have now dropped their last seven games and continue to sit fourth in the Central Division at 17-27-4-1. The Attack jump ahead of the Guelph Storm for third in the Midwest and hold a tally of 24-19-3-3 on the year.
GAME CENTRE

HAMILTON 3, WINDSOR 1
Zachary Roy backstopped his Hamilton Bulldogs to a 3-1 win over the host Windsor Spitfires, shutting down 23 of the 24 shots that came his way in the second and final meetup of both teams this season. It was a night of rookie scoring, kicked off by Hamilton’s George Diaco (5) and Windsor’s Pasquale Zito (3), who traded first period goals less than two minutes apart. Ryan Winterton (10) found the back of the net early in the second period to regain the lead, and newly signed Jan Mysak (8) scored on the empty net with 29 seconds left on the clock. Kari Piiroinen saved 25 of 27 between the pipes for the Spits, as they fall for the fourth straight game. They hold a 28-14-5-0 record and continue to sit second in the West Division, trailing the Saginaw Spirit by five points. The Bulldogs see their record bump up to 21-22-5-1, hovering at fourth in the East Division.
GAME CENTRE

BARRIE 5, MISSISSAUGA 4 OT
The top of the Central Division continued to tighten up as rookie Brandt Clarke (3, 4) scored the overtime winner to wrap up a two-goal performance and help his Barrie Colts edge the Mississauga Steelheads 5-4, extending their point streak to its seventh straight game. James Hardie (29) and Nick Isaacson (10) scored a pair for an early 2-0 Mississauga lead that was spoiled by three straight from Trey Zagrzebski (1), Evan Vierling (7), and Clarke. Nicholas Canade (16) and Florida Panthers prospect Cole Schwindt (24) pushed the Fish back in the lead, until Aidan Brown (13) evened things up to force overtime, where Clarke found the back of the net 2:22 into the extra frame. Vancouver Canucks draftee Arturs Silovs saved 41 of the 45 shots he faced in net for the Colts, while Kai Edmonds totaled 21 saves on 26 shots. The Fish now trail just one point below the division leading Sudbury Wolves at 23-23-3-1 and second in the division, with the Colts hot on their tail just a point behind them with a 22-21-3-1 tally.
GAME CENTRE