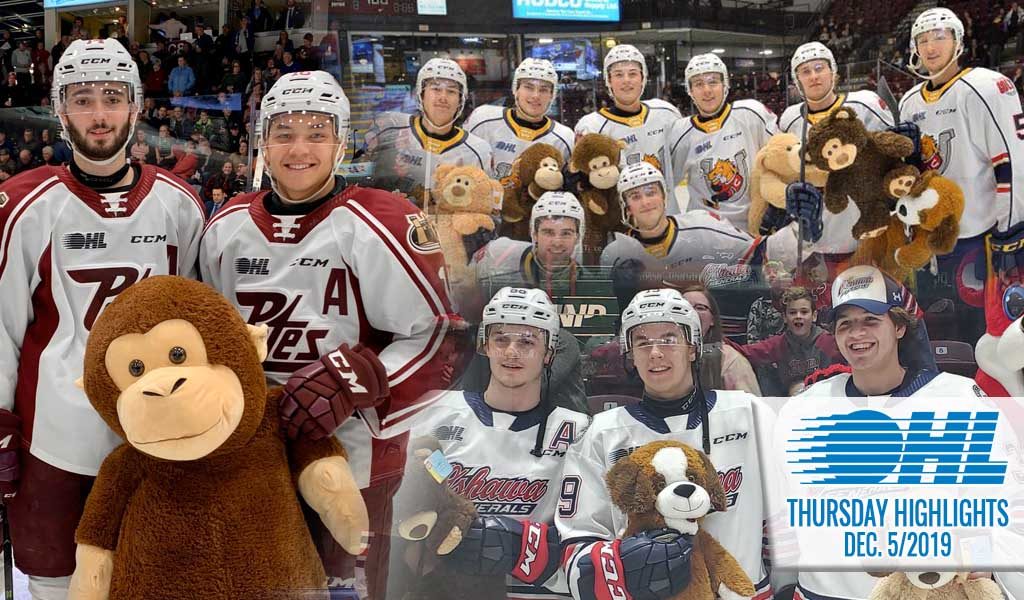 PETERBOROUGH 3, LONDON 2
The first place Petes’ tightly fought 3-2 victory brought the London Knights’ seven-game winning streak to an end Thursday night. Hudson Wilson’s (1) first as a Peterborough Pete cued the flying teddy bears at the Peterborough Memorial Centre midway through the second period, but Antonio Stranges (13, 14) responded swiftly to tie things three minutes later. Toronto Maple Leafs prospect Nick Robertson (20) lifted the Petes back up in front in his first game back from injury, and Arizona Coyotes pick Liam Kirk (15) widened the Peterborough lead just over five minutes into the third. Stranges notched one more in an effort to climb back up, but the Petes would take the win, spoiling the Knights’ run of success. London will hope to bounce back as they host the Owen Sound Attack on Friday, who will be hungry for their third straight win. Peterborough’s two points lifts them past the 67’s, maintaining their first place position. London also sticks around at first in the West, but tied with the Guelph Storm at 36 points.
GAME CENTRE

KINGSTON 5, OSHAWA 4 SO
The Frontenacs skated back from a first period deficit to complete a 5-4 shootout road win over the Oshawa Generals in Thursday’s makeup game in place of last Sunday’s postponed matchup. Ty Tullio’s (11, 12) big teddy bear goal got things going for the Gens, and Montreal Canadiens prospect Allan McShane (10, 11) followed up less than two minutes later. As the second period began, fourth-year forward Dawson Baker (7) put Kingston on the board right off the bat, but McShane’s second of the night came minutes later. Rookie Shane Wright’s point streak reached its seventh game as he gave the Fronts their second goal, and Tullio followed suit with his second goal on the Oshawa side to make the score 4-2 in favour of the Generals. The Fronts made a third period comeback on markers from overager Nick King (3) and rookie Francesco Arcuri (3) to send the game to overtime, and shootout goals from former General Nick Wong and Arcuri would give Kingston the win. Christian Propp had a 40-save performance in his fifth straight start for the Fronts, while Andrew MacLean faced 25 shots in net for Oshawa. The Fronts appear to be turning their season around with their sixth win in seven games and second straight comeback win, but their 18 points keeps them last place in a highly competitive East Division. Oshawa falls to 16-8-0-2, hovering in third.
GAME CENTRE

SOO 5, NIAGARA 1
The Greyhounds kicked off their weekend roadie in high spirits with a 5-1 victory over Niagara. Robert Calisti (8, 9) and Cole MacKay (14) got things rolling in the first period for the Soo, but Oliver Castleman (9) capped off the first twenty minutes with what would be Niagara’s only goal on the night. Jaromir Pytlik (12) scored the lone second period marker, and third period goals from Ryan O’Rourke (6) and Calisti would wrap things up at Meridian Centre. O’Rourke made his return to the lineup, coming back from injury after being out since Nov. 9th. The Hounds took it to the IceDogs, outshooting them 46-16 as IceDogs rookie Tucker Tynan totaled over 40 saves for the fifth time this season. The IceDogs’ record falls to 11-13-4-1 on the season, keeping them third in the Central Division. The Soo, still at the bottom of the West, have now tied the Sarnia Sting’s 24 points with an 11-15-2-0 record.
GAME CENTRE

KITCHENER 4, WINDSOR 3
The Rangers headed home all smiles after earning a fourth straight win, this time over the Windsor Spitfires in a 4-3 contest. The Spits held a 2-0 lead into the second period as Will Cuylle (8) and Connor Corcoran (9) found the back of the net, but Axel Bergkvist’s (1) first OHL goal lit a fire under the Rangers, who came out flying with two more. Liam Hawel (8) and Jonathan Yantsis (14) put the Rangers up 3-2 midway through the third period. Windsor’s Jean-Luc Foudy (10) evened things up with 9:44 remaining in the third, but rookie Francesco Pinelli (8) would end up with the game winning goal for Kitchener. Veteran Rangers forward Greg Meireles picked up his third assist of the night on Pinelli’s deciding goal. Jacob Ingham finished the night with 23 saves, and Windsor’s Kari Piiroinen stopped 18 of 22. The Rangers remain undefeated under interim head coach Mike McKenzie and finish the night trailing the Owen Sound Attack by only two points at the bottom of the Midwest Division. Windsor falls to 15-6-3-0, second in the West Division, just one point below Flint and one point above Saginaw.
GAME CENTRE

FLINT 5, BARRIE 2
A hat-trick and four-point night from Ty Dellandrea (12, 13, 14) led the Flint Firebirds to a 5-2 road win over the Barrie Colts and officially into the West Division’s first place spot. The Firebirds came soaring with goals from Jack Phibbs (8) and a pair from Dellandrea (12, 13) in the first period before Buffalo Sabres prospect Matej Pekar scored Barrie’s first of the game to start the second, prompting fans to launch their teddy bears onto the ice. Cody Morgan’s (7) seventh on the season gave Flint another, and leading Colt Tyson Foerster (17) rounded out the first forty minutes with one more for Barrie. Dellandrea, a Dallas Stars pick, completed his hat-trick with just a minute and a half left on the clock, springing the Firebirds up by three goals. Anthony Popovich was huge in net, turning aside 45 shots. Barrie’s loss drops their record to 13-9-1-1, as they maintain second in the Central Division, just one point above Niagara.
GAME CENTRE