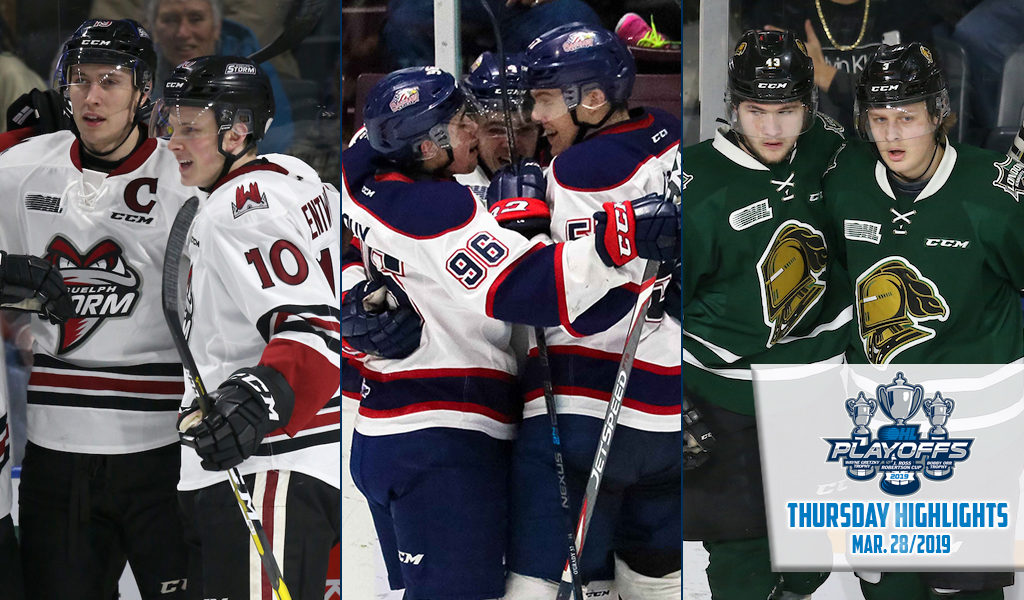 The Sarnia Sting saw a third period lead slip away as Blade Jenkins (2) completed the Saginaw Spirit comeback in overtime, sending his club to the second round for the first time since 2012. The Sting pulled ahead 4-2 with three second period goals before Saginaw responded with three unanswered, getting the tying goal from Ryan McLeod (1) with 3:30 remaining. Owen Tippett (5), Damien Giroux (4) and DJ Busdeker (1) also scored for the Spirit while Brady Gilmour had a pair of assists. Sting captain Ryan McGregor (1, 2) scored twice while Franco Sproviero (1) and Justin McCombs (2) also put shots past Saginaw’s Ivan Prosvetov. The Spirit outshot the Sting 55-32 as former Saginaw netminder Cameron Lamour turned in a 50-save effort. The Spirit await their second round opponent while the Sting sees its season come to an end. Sarnia played to a 28-33-5-2 record this past season, finishing seventh in the Western Conference. They were led in scoring by Swedish winger Hugo Leufvenius (37-44–81). Spirit forward Owen Tippett (5-3–8) led the way offensively in the series with eight points over four games.
GAME CENTRE

The Guelph Storm settled the score with the Kitchener Rangers, avenging last year’s sixth game first round exit with a 4-0 series sweep completed Thursday night on Sportsnet. The Storm skated to a 5-1 road win as MacKenzie Entwistle (2), Nick Suzuki (4), Cedric Ralph (1) and Alexey Toropchenko (4, 5) scored goals. Guelph outshot Kitchener 42-27 as Rickard Hugg (1) responded with the lone goal for the Rangers. Anthony Popovich made 26 saves for the win while Storm defenceman Sean Durzi picked up two assists. Guelph is into the second round for the first time since 2015 while the Rangers see their season come to an end. Kitchener posted the league’s best power play this past season, skating to a 34-30-3-1 record for fifth in the conference. They were led in scoring by Greg Meireles (36-61–97). The Storm await a second round opponent. Nate Schnarr’s 10 points (2-8–10) sit tied for second in the OHL Playoffs.
GAME CENTRE

Adam Boqvist’s (5, 6) tear across the scoresheet continued on Thursday as the Chicago Blackhawks first round pick scored twice, helping the London Knights complete a 4-0 series sweep of the Windsor Spitfires. The Knights took a 5-2 road win as William Lochead (1), Kevin Hancock (1) and Billy Moskal (1) also lit the lamp while Alex Formenton picked up four assists. Tyler Angle (3) and Connor Corcoran (2) scored Windsor goals while captain Luke Boka picked up a pair of assists. London outshot Windsor 29-25 as Jordan Kooy turned aside 23 shots for his fifth straight win opposite Windsor’s Kari Piiroinen. The Spitfires see their season come to an end following a 25-33-5-5 eighth place finish in the conference. London advances to the second round after a first round exit last spring. Formenton (2-9–11) leads the OHL Playoffs in scoring with 11 points.
GAME CENTRE

Anthony Salinitri (3, 4) scored on a third period breakaway to snap a 2-2 tie and give the Generals the lead for good, prevailing in a playoff atmosphere at the Peterborough Memorial Centre by a score of 5-2. Oshawa took a 3-1 series lead as Salinitri scored twice while Kyle MacLean (3), Brett Neumann (3) and William Ennis (1) were also credited with goals. The Petes outshot the Generals 37-27 as Kyle Keyser needed to be good, turning aside 35 shots for the win. Declan Chisholm (2) and Nick Robertson (1) scored Peterborough goals before a home crowd of 3,734. Ennis was credited with his first goal of the playoffs after Peterborough’s Chris Paquette sent a puck back to the point before it rolled all the way into the Petes empty net with 31 seconds remaining. Oshawa looks to close out the series at home in Game 5 on Saturday night.
GAME CENTRE

The Niagara IceDogs climbed out to a 3-0 lead before holding off a late North Bay Battalion comeback attempt to take Game 4 on the road by a score of 5-3. The chippy affair included plenty of extracurricular activity but the IceDogs prevailed, holding the Battalion to 0-for-8 on the power play while going 2-for-7 on the man advantage. Drew Hunter (1) and Jack Studnicka (3) scored first period power play goals for the IceDogs before Philip Tomasino (3), Oliver Castleman (2) and Elijah Roberts (1) added additional markers. Tomasino led the way with a goal and two assists as Niagara outshot North Bay 48-26. IceDogs forward Matthew Philip left the game with an injury and did not return. Luke Moncada (1), Brad Chenier (2) and Theo Calvas (1) scored North Bay goals while Christian Propp made 43 saves. The Battalion will be on the ropes on Friday night in St. Catharines as the IceDogs hold a 3-1 series lead.
GAME CENTRE