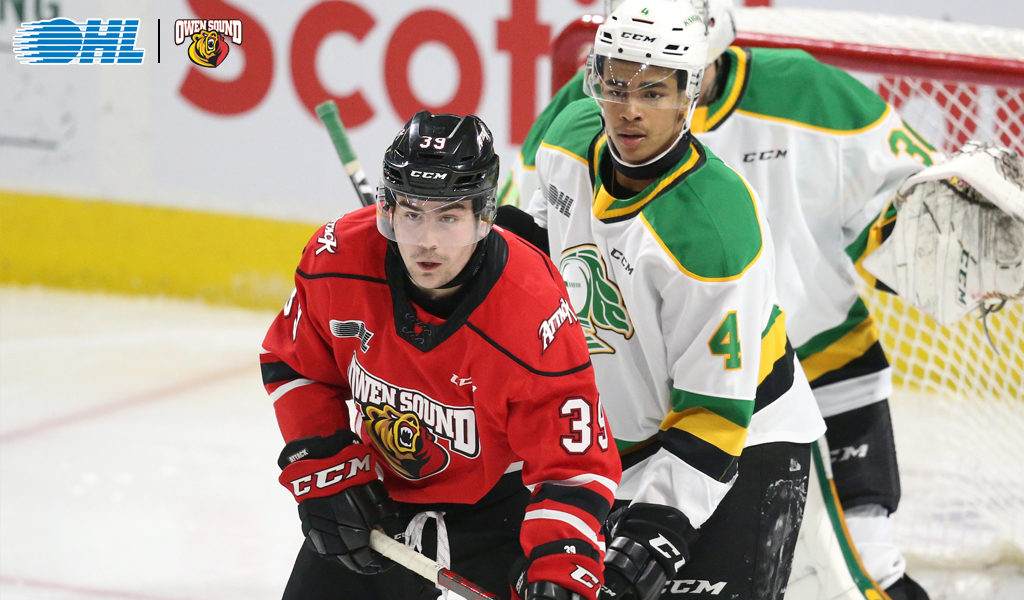 The Owen Sound Attack named its leadership group on Tuesday afternoon, with 2023 NHL Draft prospect Colby Barlow leading the Bears into the 2022-23 season wearing the ‘C’.

Joined by alternates Ethan Burroughs, Gavin Bryant and Sam Sedley, Barlow enters the campaign off a record-setting 30-goal season as a 16-year-old in 2021-22. The 6-foot-1, 187Ib. left-winger from Orillia, Ont. paced all 16-year-old rookies in the goal-scoring department and equalled Joey Hishon‘s 2007-08 club record of 47 points by a 16-year-old in the process. He went on to score five goals in Owen Sound’s seven-game first round playoff series against the Flint Firebirds.

Barlow, who was voted to the League’s first all-rookie team last season, went on to help Canada win gold at the 2022 Hlinka Gretzky Cup recording five points (2-3–5) in as many games. He was selected by the Attack with the eighth overall pick in the 2021 OHL Priority Selection out of the Toronto Marlboros U16 program.

Burroughs enters his third season with the Bears after posting 30 goals, 21 assists and 51 points in 68 games as a sophomore. The former second round pick in the 2019 OHL Priority Selection attended rookie camp with the Florida Panthers earlier this month.

Bryant comes off a 38-point rookie campaign in Owen Sound after being the club’s second round pick in the 2020 OHL Priority Selection. The Ingersoll, Ont. product spent time at both centre and the wing in his first OHL season.

Barlow and the Attack open their season on Friday night in London. Their home opener is set for Saturday night against the Kitchener Rangers.

Congratulations to captain Colby Barlow and the rest of our 2022-23 leadership group!#FuelledbytheRoar pic.twitter.com/8b5JcsDOVD