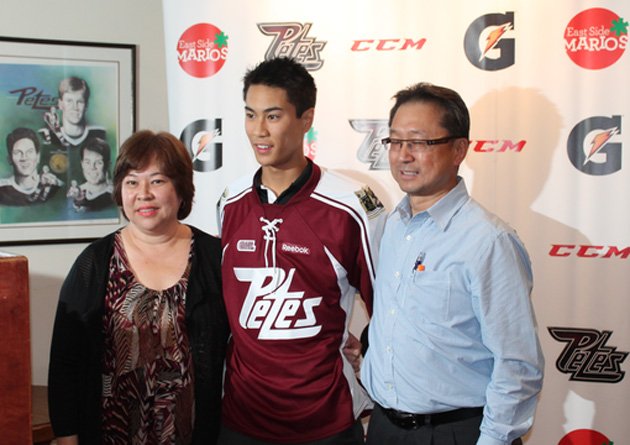 The Peterborough Petes are excited to announce the signing of Jonathan Ang to a Standard Player Agreement on Friday. The Petes selected Ang in the first round, ninth overall in the 2014 OHL Priority Selection in April.

Ang is a 5’10”, 148 lbs right-handed Centre who played for the Markham Waxers in 2013-2014. In 40 regular season and playoff games he recorded 33 goals and 18 assists for 51 points, and piled up individual awards and accomplishments including earning MVP honours at the 2014 Telus Regional Cup Championship.

“We’re very excited to welcome Jonathan to the Peterborough Petes family,” noted Petes General Manager Michael Oke. “He is a highly skilled player who embodies all of the characteristics required to be successful in the Petes organization and the OHL, including hard work, determination, and a team-first attitude.”

“It’s an honour to sign with the Peterborough Petes,” added Ang. “I know it will be a challenge to play at the OHL level, but I’m looking forward to the opportunity to work hard and contribute to this great organization.”

Ang has been invited to participate in Hockey Canada’s Program of Excellence national under-17 development camp in late July, where he will compete for a spot on one of three national teams at the World Under-17 Challenge in November.