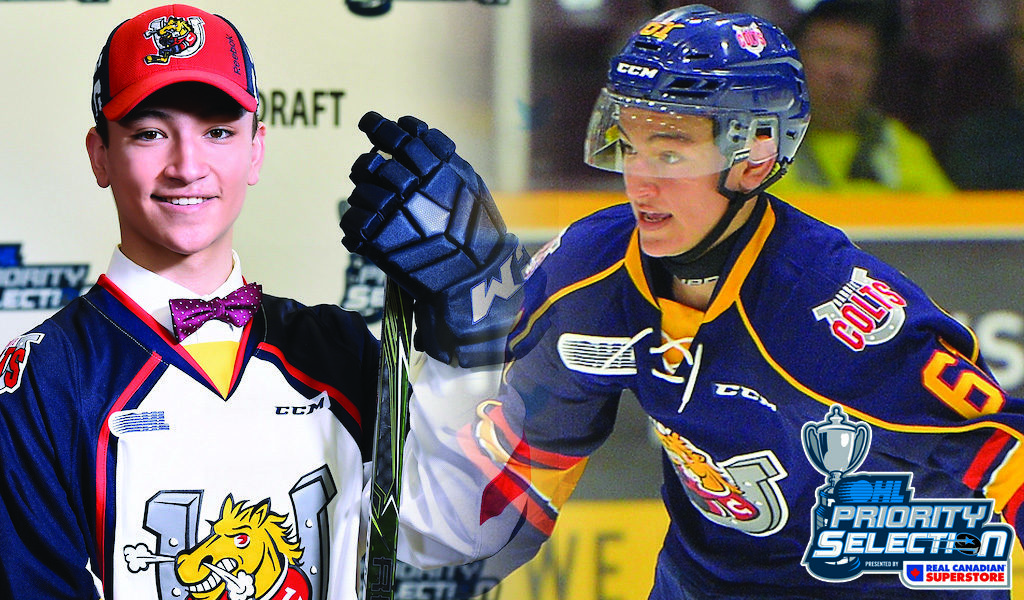 Twelve months ago Ryan Suzuki was well-dressed for the big day, opting for a bow-tie as he slipped a Barrie Colts jersey over his head as the first overall pick of the 2017 OHL Priority Selection.

The smooth-skating, playmaking centreman was the ALLIANCE Player of the Year, helping the London Jr. Knights earn their seventh straight league championship and joined Aaron Ekblad and Daniel Tkaczuk as the third player in Barrie Colts franchise history to earn the Jack Ferguson Award as the OHL’s first overall pick.

Fast forward to the present and the soft-spoken but reflective 16-year-old is playing with the big boys, centering a line between 19-year-olds Lucas Chiodo and Zach Magwood for the Central Division champion Colts as they take on the Kingston Frontenacs in Eastern Conference Semi-Final action.

Suzuki, who helped the London Nationals Jr. B club win a GOJHL Western Conference title as a 15-year-old last spring, contributed a goal and an assist in Barrie’s 6-5 overtime win in Game 1 on Wednesday.

The London, Ont. native says his first OHL season has been somewhat of a whirlwind.

“Obviously being the first pick there’s a lot of pressure there, and I think I put a lot of that on myself,” he said. “Once I got to Barrie, met my billets and teammates and started to learn how everything works all of those questions you come in with just sort of work themselves out.

“The season went by really fast and I learned a lot.”

After finishing as the league’s last place team a year ago, Dale Hawerchuk’s club surged 48 points up the standings to claim their third Central Division crown in the past four seasons as mid-season additions in OHL scoring champion Aaron Luchuk and Russian sniper Dmitry Sokolov helped Barrie finish with a conference-leading 297 goals-for.

While Suzuki finished inside the top-five in OHL rookie scoring, he wasn’t the only first overall pick putting up significant numbers as top 2018 NHL Draft prospect Andrei Svechnikov, the first pick of the CHL Import Draft, led all OHL newcomers with 72 points (40-32–72) in just 44 games.

WATCH THIS: Quite the 1st impression.

“I think having Svechnikov and some of our other guys made it a little easier for me to get comfortable early in the season and took some of that pressure off,” Suzuki noted. “It really gave me a chance to learn what we’re doing as a team and not focus so much on just points.”

The younger brother of Owen Sound Attack star and Vegas Golden Knights first rounder Nick Suzuki, Ryan recorded a goal and an assist in his OHL debut and finished the season with 44 points (14-30–44) over 64 games. He recorded 11 different multi-point performances headlined by a five-assist showing to close out the regular season on March 17th against Sudbury.

With he and older brother Nick both competing in second round playoff action, Ryan’s parents Rob and Amanda have found a creative way around a difficult decision.

“My dad has a pretty cool setup in the living room right now,” he said with a laugh. “He has the OHL Action Pak playing on two different screens so they can watch us both if we are playing on the same night.”

While he’s focused on the playoff mission at hand, Suzuki hasn’t forgotten where he was last April, preparing for the OHL Priority Selection and the mindset that came with it.

“If I was going to tell any of the guys heading into this weekend anything, it’d be to to try not to worry about it too much and just take in as much as you can,” he said. “It’s a whole new opportunity right in front of you and it’s also a lot of fun to see where all your friends and teammates end up going.”

“I know for some guys they want to stay close to home,” he continued, “but honestly it’s been a great experience being in Barrie and having the chance to experience life in a new place, in a new school and to make new friends.”

What a year it’s been for @RSuzuki61 delivering big for @OHLBarrieColts in Game 1 win #BARvsKGN. pic.twitter.com/FbuRCAo5jH

Suzuki and the Colts return to action at home on Friday in Game 2 of their second round series against Kingston as they chase their first OHL Championship since 2000.

Suzuki will pass the torch to the first overall pick of the 2018 OHL Priority Selection expected to be revealed on Friday as the Sudbury Wolves will announce the newest member of their program.

Follow the 2018 OHL Priority Selection presented by Real Canadian Superstore live online at ontariohockeyleague.com beginning at 9:00am on Saturday. Tune in to the OHL Draft Show with host Terry Doyle for full coverage of the first three rounds of Saturday’s proceedings.