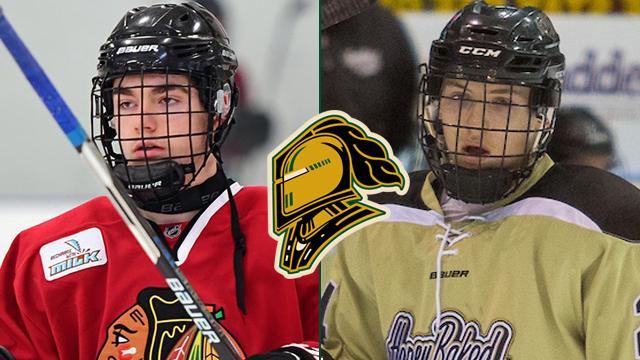 LONDON, ON – London Knights General Manager Rob Simpson is proud to announce that the team has signed their first two picks of the 2017 Ontario Hockey League Priority Selection, Lucas Rowe and Andrew Perrott. Both players were signed to an Ontario Hockey League Standard Player’s Agreement.

Lucas Rowe was selected 18th overall by the Knights following a successful season with the Mississauga Reps. The 5’11.5” 164-pound centre from Etobicoke, Ontario scored 18 goals and recorded 17 assists in 33 games for the Reps. He helped lead the franchise to an OHL Cup Championship when they defeated the Young Nats by a 3-2 score.  Rowe will wear number 21 for the Knights this season.

Andrew Perrott was selected in the 2nd round, 34th overall by the Knights in the 2017 OHL Priority Selection. He spent last season playing for his hometown Detroit HoneyBaked 16U, where the 6’0” 195-pound defenceman recorded 25 points in 46 games.  Perrott will wear number 24 for the Knights this season.