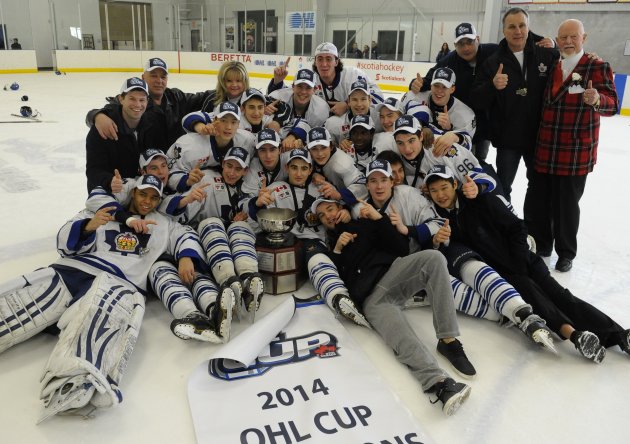 Toronto, ON (March 16, 2014) – The GTHL’s Toronto Marlboros captured their fourth OHL Cup title in 10 years with a 5-0 win over the Toronto Jr. Canadiens at Buckingham Arena in Toronto.

The Marlboros were making their eighth straight appearance in the Championship Final winning in 2005, 2009 and 2011.

The victory was revenge for the Marlboros who were defeated by the Jr. Canadiens in a thrilling eight-game series to decide the GTHL champion just prior to the Showcase Tournament.

“That was a heartbreaking loss and we did not want to finish off the season not getting them back,” said McLeod following Sunday’s win. “It feels amazing to get the final win.”

The Marlboros jumped on the Jr. Canadiens early with goals in the first period from Taylor Raddysh and Cliff Pu.

McLeod’s first goal of the game increased the lead in the second period to give the Marlboros a commanding 3-0 lead into the third period.

Marlboros Bantam call-up Elijah Roberts increased the lead in the third period, before McLeod topped it off with a shorthanded goal in the final two minutes.

Raddysh was named Player of the Game for the Marlboros and finished the tournament as the leading scorer with five goals and nine assists for 14 points in seven games.

“We just felt down after the game eight loss,” said Raddysh. “We brought a lot of momentum from the past games of the tournament and it helped us through this game.”

Kasimir Krol earned the shutout for the Marlboros finishing the tournament with a perfect record of 5-0-0 and allowed just six goals over five appearances.

The Jr. Canadiens entered the tournament as the top ranked team competing for their first OHL Cup title since 2008.

Defenceman Mitchell Byrne was named Player of the Game for the Jr. Canadiens in Sunday’s final, while Adam Timleck led the club in scoring with nine points in seven games.

The Marlboros finished the tournament with a 6-0-1 record outscoring their opponenets 32-13 in seven games.

“It’s like a family we are like brothers together,” said Marlboros defenceman Matt Cairns. “We wanted to win for the guys beside us and that’s what we did out there.”