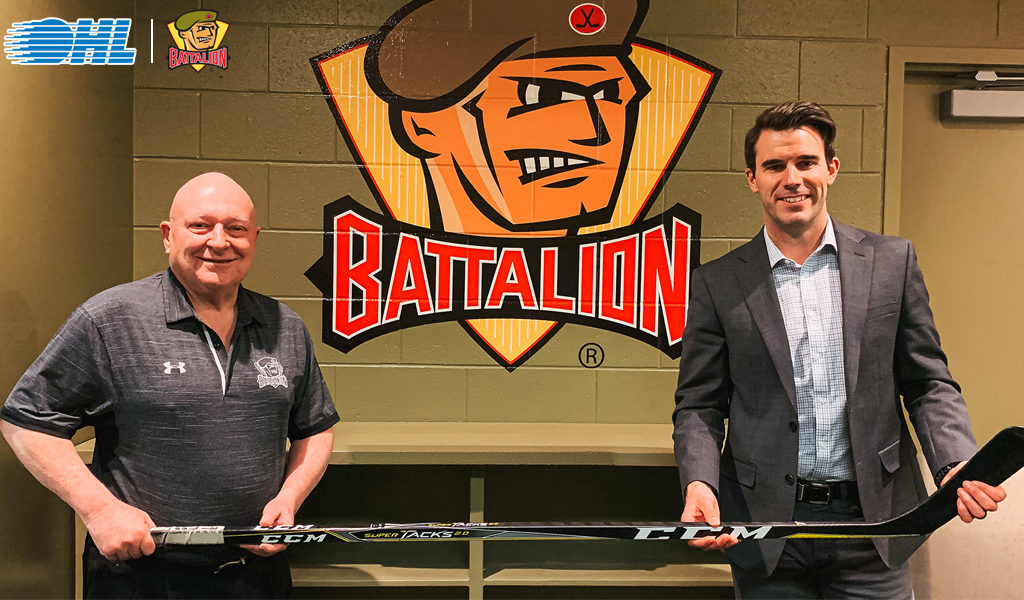 Oulahen has agreed to a three-year contract to oversee a coaching staff that includes assistants Scott Wray and Bill Houlder. Oulahen had been the interim head coach since Dec. 10, when Stan Butler, the only director of hockey operations and head coach the club had known since its inaugural 1998-99 season in Brampton, was reassigned.

Made for green — The North Bay Battalion have named Ryan Oulahen the second Head Coach in franchise history.#BattleTogether pic.twitter.com/saIJuPdY8e

North Bay, which had a won-lost-extended record of 5-23-0 when Oulahen took over, then went 12-18-4 before the regular season was cancelled March 12 because of the coronavirus pandemic. The Battalion, which saw six games abandoned, last played March 8 in an 8-0 loss to the visiting Ottawa 67’s.

The Battalion, which finished 17-41-4 for 38 points, last in the Central Division, Eastern Conference and league, has the No. 1 pick in the OHL Priority Selection, scheduled to be held April 4 via the Internet.

“I’ve been very impressed with the job Ryan has done,” Battalion owner Scott Abbott said in a video news conference. “I’m very happy with the progress this young roster has made under his guidance on the bench. It’s an exciting and energizing occasion to look forward and foresee a lot of innovation, experimentation and accomplishments in the near future.”

Oulahen, chosen by Brampton in the fourth round of the 2001 OHL Priority Selection, played 182 games over three seasons, scoring 65 goals and adding 71 assists for 136 points. The club’s captain in 2004-05, his final season, he also produced six goals and 12 assists for 18 points in 28 playoff games.

Selected by the Detroit Red Wings in the fifth round of the 2003 National Hockey League Entry Draft, Oulahen played 302 games over four seasons with the Grand Rapids Griffins, Detroit’s American Hockey League affiliate, scoring 53 goals and earning 54 assists for 107 points. After an injury ended his playing career, he joined the Battalion as an assistant coach in 2010-11 in Brampton, a position he held until 2016-17, when he became head coach of the Flint Firebirds.

“I’m extremely thrilled and excited,” said Oulahen, a Newmarket, Ont., native who turns 35 on Thursday. “This is something I’ve been working for for a very long time. I’ve been ingrained in this organization since 2001 when I was first drafted, and I’ve been a Battalion through and through.

“I’m excited to continue the work that we’ve started with our players and staff. To have this team since December and really see what we have on the ice, what we have coming up in the system, the type of people we have working here each and every day, is what excites me. It’s an exciting time to be a Battalion fan.”

Said Abbott: “Ryan was a very accomplished player for us and captain of the team in his final season. He coached as an assistant, both in Brampton and North Bay, before going to Flint, so the familiarity with him, with his work ethic and character, were certainly important. He was always one of the favorites, if not the leading candidate, to become the second head coach in the organization’s history.”

Adam Dennis, an assistant coach before being named general manager Dec. 10, has a long history with Oulahen.

“I’ve known Ryan since we were kids, going back to our days in the Metro Toronto Hockey League. We’ve grown up together. We played against each other in the OHL, we played against each other in the AHL, and it’s all come full circle. I’ve been impressed with his organization, his communication and his focus on skill development. Anyone who has paid attention to our team can recognize some of our younger players getting greater opportunities, and they’ve all developed.”

Abbott said the decision to remove the interim tag from Oulahen’s job title was part of a process that started when he coached his first game, a 4-3 home-ice victory Dec. 12 over the Erie Otters.

“When he joined us in December, we had an agreement that we would come to a conclusion about how he felt about the job and how much he might want it on an ongoing basis, and I said we would take that time and see how he did and assess him, and I think we both came to the same conclusion, that we were happy with the fit.

“The team did very well. Apart from a slow period at the end of January and the beginning of February, the team, regardless of whether it was winning or losing, played with a great deal of energy and enthusiasm, and the players were getting a very solid foundation for the future. As I said in December, we undertook a rebuild this season, and I wanted to see the rebuild was on a solid footing and a foundation was being laid properly, and that’s what I saw from Dec. 10 on.”

The Troops were four points behind the Kingston Frontenacs, who were awarded the eighth and last conference playoff berth in a tiebreaker over the Niagara IceDogs, when the season was stopped. The Canadian Hockey League, which embraces the OHL, Quebec Major Junior Hockey League and Western Hockey League, announced Monday that playoffs and the Memorial Cup championship tournament were cancelled.

“We got valuable experience making a playoff push and playing meaningful hockey down the stretch,” noted Oulahen. “We believe that, if we were able to continue the season, we might still be playing at this point in time. We want the guys to remember the feeling of confidence, and they understand the type of team we became at the end.”

Said Dennis: “We really got to see a lot from the assistant coaches. Ryan was able to manage the guys and give them opportunities to show what they can do. This group really works well together.”

“It’s all about learning, whether you’re a player or coach. We’re learning every day. I’m thankful for the opportunity I had in Flint to be able to go there and try to do different things and become a better coach. The biggest thing I learned there was patience, to be more even-keeled and deal with the ups and downs. I’m better for it today. I can return to the Battalion as a much improved coach.”