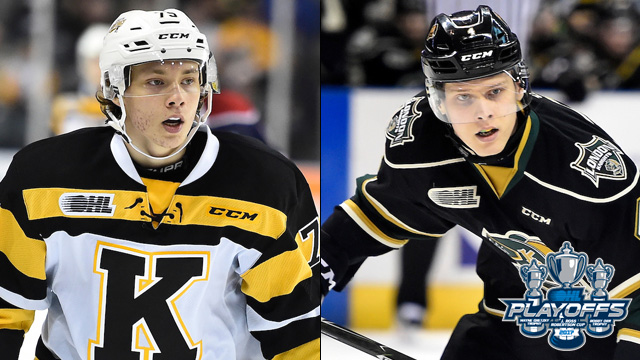 KINGSTON 3 – HAMILTON 2 – OT – KGN wins series 4-3
A hard forecheck by Toronto Maple Leafs prospect Stephen Desrocher set the stage for overtime heroics in Kingston as 2017 NHL Draft prospects Jason Robertson (4) and Linus Nyman (3, 4) hooked up to send the Kingston Frontenacs to the second round for a second straight year. Nyman scored 8:48 into overtime as the Frontenacs overcame a 2-0 deficit on the Game 7 scoreboard and in the series overall, defeating the Hamilton Bulldogs 3-2 on home ice. The unit of Ted Nichol, Robertson and Nyman accounted for all three Kingston goals as Nyman scored twice and Robertson had a goal and two helpers. The Bulldogs had second period goals from Matt Luff (4) and Michael Cramarossa (3), outshooting the Frontenacs 25-21 in the loss. The win is Kingston’s first Game 7 victory since 1998 as they advance to the second round to take on the Peterborough Petes who they lost to in seven games in 2014. The Bulldogs see their season come to an end after reaching the OHL Playoffs for the first time in team history. Veterans Niki Petti, Michael Cramarossa and Dawson Carty all played their final OHL contest.
GAME CENTRE

LONDON 3 – WINDSOR 2 – LDN wins series 4-3
In a series that won’t soon be forgotten, the defending Mastercard Memorial Cup Champion London Knights successfully defended their title against the emerging 2017 host Windsor Spitfires with a 3-2 Game 7 win on home ice. The Knights rallied from a 3-1 series deficit, coming all the way back to defeat Windsor in Tuesday’s deciding Game 7. Vancouver Canucks prospect Olli Juolevi (3) scored the game winner with 7:11 remaining in the third period before Calgary Flames draftee Tyler Parsons provided some big saves to secure the victory and send the Knights to the second round. Janne Kuokkanen (4) and Max Jones (3) opened the scoring for London before the feisty Spitfires battled back to tie the score at two on third period goals from Jeremy Bracco (2) and Aaron Luchuk (4). The Knights went 2-for-5 on the power play in the win as Parsons made 30 saves. Windsor’s Michael DiPietro was outstanding at the other end, making 23 saves, many of high quality. The Spitfires will have some time off before they host the 2017 Mastercard Memorial Cup on home ice beginning May 19th when they take on the champions from the QMJHL. London advances to take on the Erie Otters for a third straight year.
GAME CENTRE