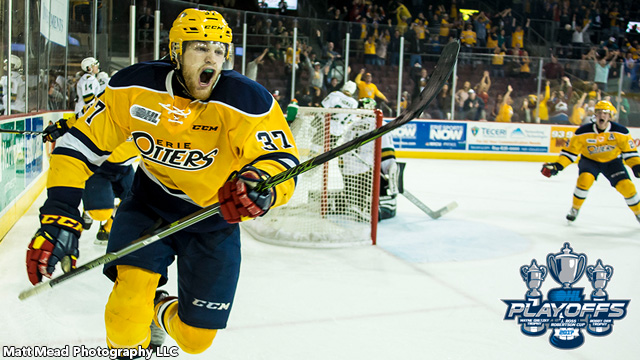 ERIE 5 – LONDON 4 – OT – ER wins series 4-3
Carolina Hurricanes prospect Warren Foegele (4) scored on the Erie Otters’ 63rd shot of the night, chipping a feed from Darren Raddysh over the shoulder of London’s Tyler Parsons 10:40 into overtime of Game 7 in a thrilling 5-4 victory on home ice. The goal came just moments after a big Joseph Murdaca glove save off London’s Janne Kuokkanen on a fast break to preserve the tie. The Otters overcame a 3-1 deficit as Murdaca came on in relief to record the win for the second time in the series, turning aside 17 of the 18 shots he faced. Ivan Lodnia (2) opened the scoring for the Otters before London goals from Kuokkanen (10), Evan Bouchard (3) and Cliff Pu (2) in a span of 2:11 gave the Knights a 3-1 lead. Darren Raddysh (7) came up with a key goal to pull the Otters within one with 0.2 seconds left on the first period clock. Parsons was big in the second as the Otters outshot the Knights 21-9 in a scoreless frame. Erie came out hungry in the third, tying the score on a goal from Anthony Cirelli (8). Alex DeBrincat (6) deposited a Dylan Strome offensive zone faceoff win past the glove of Parsons with 3:31 left in the third to give the Otters a 4-3 edge. The defending Mastercard Memorial Cup Champs would claw back though as Mitchell Stephens (7) knotted the score at four with exactly one minute left on the clock. Foegele’s OT winner came before an Erie crowd of 5,223 decked in gold as the Otters return to the Western Conference Final for the fourth year in a row. Parsons made 58 saves in the loss for London as the Knights were outshot 63-29. London veterans Owen MacDonald, JJ Piccinich and Dante Salituro played their final OHL contest. The Otters begin a Western Conference Final showdown with the Owen Sound Attack on Friday night at home.
GAME CENTRE 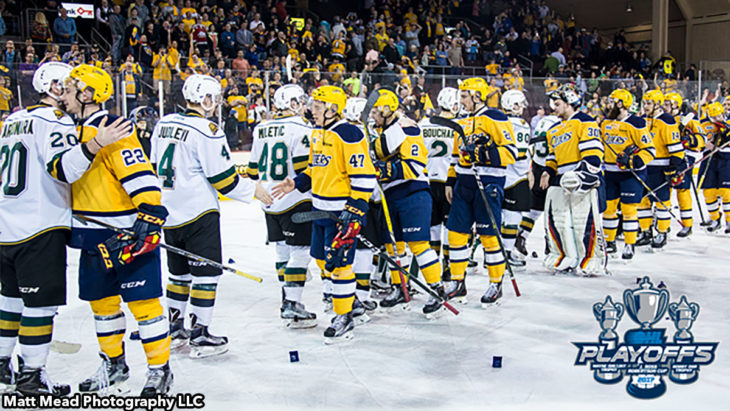