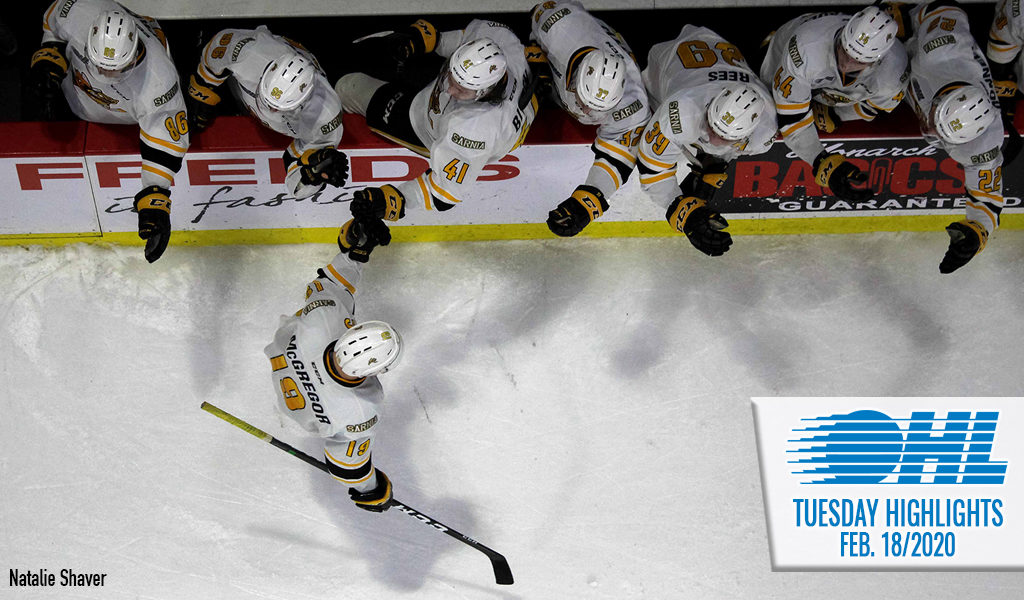 SARNIA 6, WINDSOR 4
Overage captain Ryan McGregor (21, 22, 23) recored his first career hat-trick in his 280th game, leading the Sarnia Sting to a 6-4 road win in Windsor. Sarnia used a four-goal second period to vault ahead of the Spitfires for good, returning to the win column following consecutive losses. Daniel D’Amico (21) gave the Spitfires an early lead before the Sting responded with three straight. McGregor potted a pair as Sarnia led 2-1 before Brayden Guy (14) and Ryan Roth (22) extended that lead. Egor Afanasyev (26) cut the Sting lead to three before rookie Ty Voit (8) put Sarnia up 5-2 with one minute to go in the second. Curtis Douglas (24) scored for the Spits with 2:50 remaining but McGregor responded by hitting the empty net for the hat-trick. Matthew Maggio (3) rounded out the Windsor scoring for a 6-4 final on Mickey Renaud Night at the WFCU Centre. Sarnia’s Guy finished with a goal and two assists while Jamieson Rees and Sam Bitten each had a pair of helpers. Ben Gaudreau made 33 saves for the win as the Sting were outshot 37-21. The Spitfires see a four-game winning streak go by the wayside, falling to 32-16-5-0 for fifth in the Western Conference. Sarnia climbs to 19-31-5-1. The Spitfires took four of the six meetings between the two clubs on the season.
GAME CENTRE