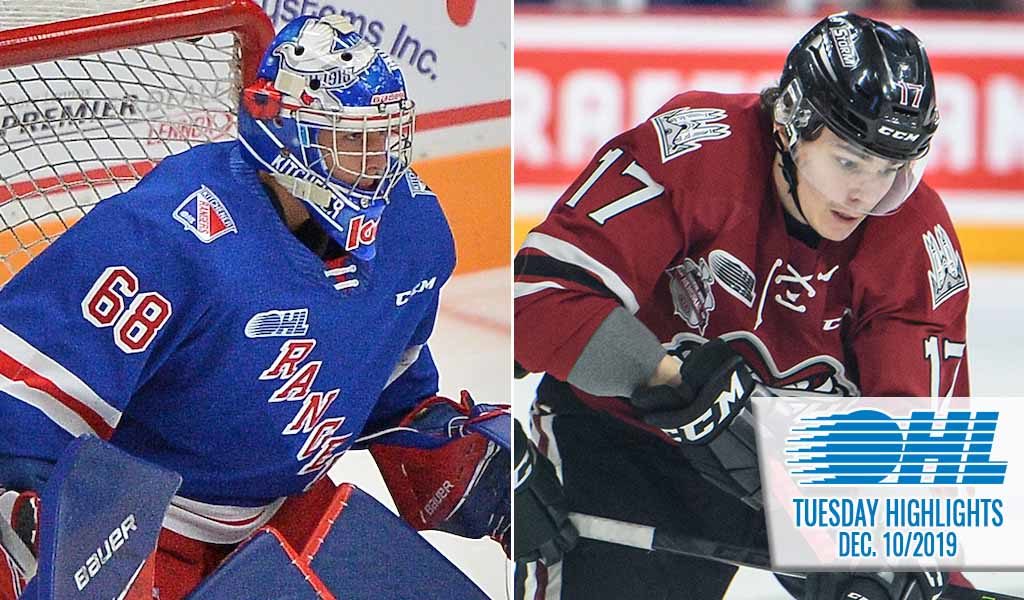 GUELPH 4, OWEN SOUND 3
A show-stopping four-goal performance from Pavel Gogolev (17, 18, 19, 20) powered the Guelph Storm past the Owen Sound Attack at the Bayshore on Tuesday in a 4-3 decision. Gogolev’s first two goals came in the first period, before Owen Sound caught up with goals from Griffin Wilson (2) and Brady Lyle (9) within the second period’s first 10 minutes. Gogolev completed the hatty halfway through, and topped off his four-goal night 14:23 into the third. Fourth-year OHLer Barret Kirwin (15) cut Guelph’s lead to 4-3 a minute and a half later, but the Attack were unable to match Gogolev’s performance and were handed their 11th loss on the year. Rookie Owen Bennett provided 30 saves in net for the Storm, and Owen Sound’s Mack Guzda saved 27 shots. Four goals in a single game is a career-high achievement for Gogolev, who sits seventh in the OHL in both goals and overall points. Guelph moves past the London Knights atop the Midwest Division with an 18-6-1-3 tally, while Owen Sound’s 31 points keeps them hovering at fourth in a tight race with the Erie Otters and surging Kitchener Rangers. The Attack will be without head coach Alan Letang in the coming weeks as he is part of Canada’s National Junior Team coaching staff.
GAME CENTRE

KITCHENER 4, LONDON 0
Jacob Ingham’s fourth career shutout and his team’s seventh straight win came in a 4-0 blanking of the Midwest Division visiting rival London Knights. Teddy Bear goal scorer Jesse Fishman (2) got the Blue Shirts on the board with his second career OHL marker, earning him the title of the 25th teddy bear scorer in Rangers history. The squad’s next three goals came within the final twenty minutes from Justin McPherson (1), Jonathan Yantsis (17), and Reid Valade (10). The Rangers put 40 shots on London’s Dylan Myskiw while Ingham, an L.A. Kings prospect, shut down all 28 shots he faced, earning his first shutout as a member of the Rangers and helping Kitchener blank London for the first time since 2012. Their seventh victory in a row boosts them up to 14-10-2-2 on the season, where they continue to sit at third place in the division, just six points behind the Knights. The Knights are without head coach Dale Hunter on the bench for the coming weeks as he serves as head coach of Canada’s National Junior Team.
GAME CENTRE

OHL Mourns the Loss of Bob Nevin
15 hours ago