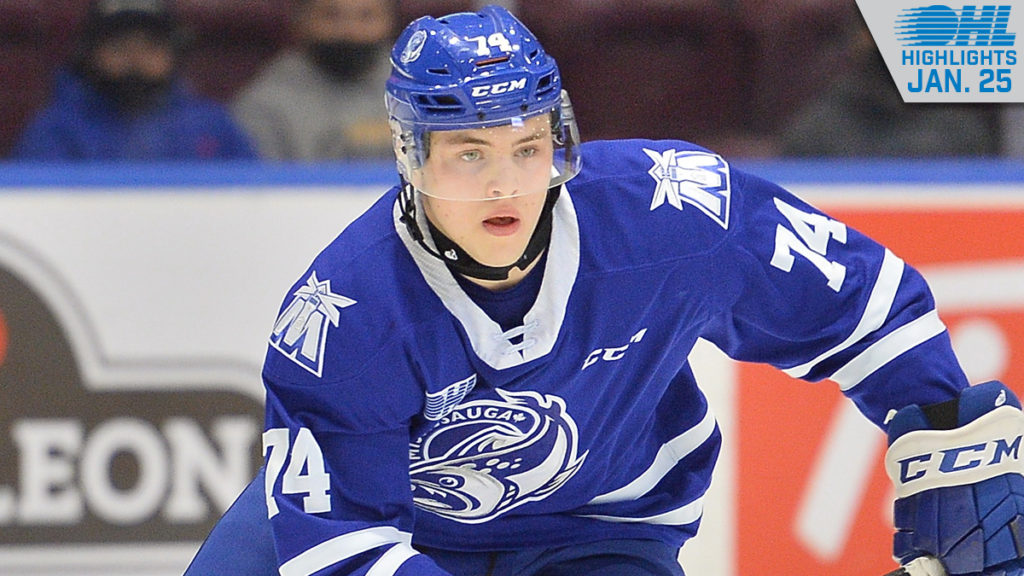 MISSISSAUGA 4, PETERBOROUGH 1
– Zander Veccia recorded his first career two-goal effort, including one shorthanded to lead the Steelheads to victory in Peterborough.
– Chicago Blackhawks prospect Ethan Del Mastro had a goal and an assist to earn first star honours.
– Peterborough’s Chase Stillman opened the scoring 1:30 into the first period and that’s all the offence the Petes would muster.
– Mississauga outshot Peterborough 39-14 as Roman Basran made 13 saves for the win.
– Peterborough’s Michael Simpson stopped 35 of 38 to earn second star recognition.
– The Steelheads bounce back to defeat the Petes after losing 7-4 to them at home on Friday. The Trout improve to 24-8-1-3 at the top of the OHL standings.
– Peterborough has lost seven of 10 and falls to 12-20-2-0, two points out of a playoff spot.
GAME CENTRE & HIGHLIGHTS

The Steelheads beat the Petes 4-1! Read all about tonight’s game in the @TeamSmartStop Post Game Recap!

BARRIE 9, SUDBURY 1
– The Colts scored nine goals on 45 shots, with 11 different players registering multi-point totals. Barrie scored six times in the second period.
– New York Rangers prospect Evan Vierling led the way with a goal and two assists while rookie Roenick Jodoin earned first star honours with a goal and a helper.
– Mack Guzda stopped 24 of 25 for his fourth straight win.
– Barrie’s power play went 3-for-7 on the night.
– The Colts improve to 4-0 against Sudbury this season and have won seven of their last 10, improving to 19-9-3-0 for fourth in the Eastern Conference.
– The Wolves fall to 12-21-3-1 for eighth in the Eastern Conference.
GAME CENTRE & HIGHLIGHTS

Da girls are out to Bingo and the boys are a buzzin’!

Colts blast away 9 goals with 9 different goal scorers for a big night in the Big Nickel!#BackInTheSaddlepic.twitter.com/X3a0Id2dDJ

NIAGARA 3, NORTH BAY 2 – SO
– Anthony Agostinelli scored in regulation and the shootout to lead the Niagara IceDogs to a 3-2 home ice win over the North Bay Battalion.
– Agostinelli, Liam Van Loon and Brice Cooke scored shootout markers to give Niagara the extra point.
– San Jose Sharks prospect Danil Gushchin scored his club-leading 23rd goal of the season, giving him a goal in seven of his last eight games.
– Josh Rosenzweig stopped 33 of 35 before stopping Nikita Tarasevich in the sixth round of the shootout to secure the IceDogs win.
– Owen Van Steensel and Mitchell Russell scored Battalion goals. Russell matched a career-high with his 21st of the season.
– San Jose Sharks prospect Brandon Coe climbed into the OHL scoring lead with an assist, giving him 64 points (25-39–64) in 37 games this season.
– Dom DiVincentiis left the game in the final minute of the second period and did not return. Joe Vrbetic stopped all 10 shots he faced the rest of the way before the Troops fell in a shootout.
– Niagara has split their season series with North Bay thus far, improving to 10-18-1-1, six points back of a playoff spot in the Eastern Conference.
– The Battalion have lost 10 of their last 13, falling to 19-13-3-3 for third place in the Eastern Conference.
GAME CENTRE & HIGHLIGHTS

Extra shooters no problem for the @OHLIceDogs! 🐶

Agostinelli, Van Loon, and Brice Cooke score in the 3rd, 4th and 5th round of the shootout to send the IceDogs home happy with two points and handing the Troops their 10th loss in their last thirteen games 🎥 pic.twitter.com/VDQWvBvO17