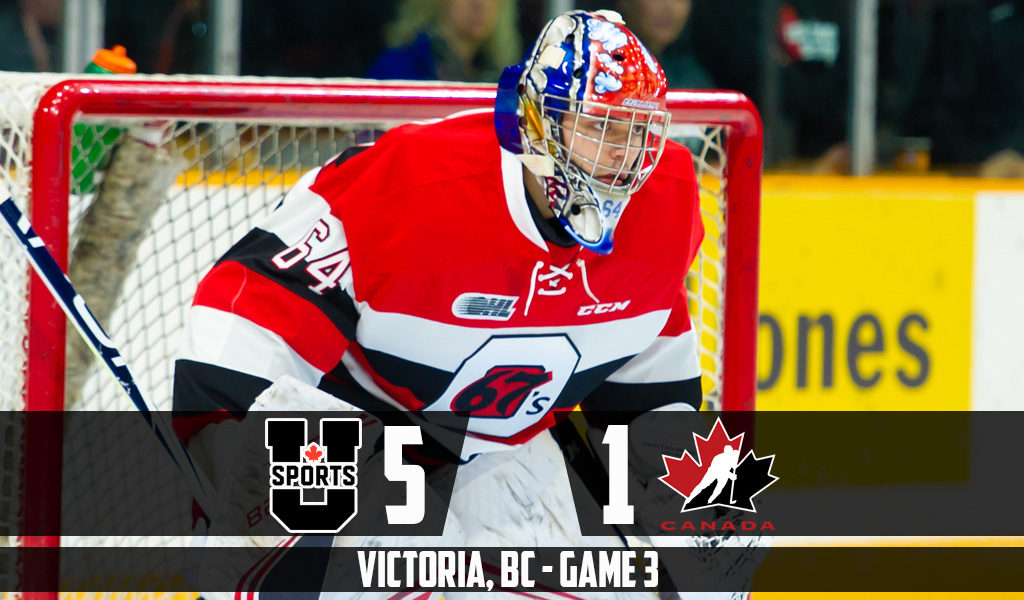 Kris Bennett (Saginaw Spirit/UNB) scored twice and goaltender Michael DiPietro stopped 32 of the 33 shots he faced as the U SPORTS All-Stars downed Canadian National Junior Team hopefuls by a score of 5-1, taking the series between the two clubs for the second straight year.

First period goals from Carson Stadnyk (Everett Silvertips/Saskatchewan) and Bennett gave U SPORTS a 2-0 lead before Owen Tippett (Mississauga Steelheads) put Canada on the board 4:32 into the second period.

Collin Shirley (Kamloops Blazers/Saskatchewan), Bennett and Christopher Clapperton (Rimouski Océanic/UNB) scored three times in the latter half of the second frame to secure the 5-1 U SPORTS victory at the Q Centre in Victoria, BC.

U SPORTS won two of the three series games, outscoring Canada 12-7 in the process.

After four cuts were made following Thursday’s action, Canada’s National Junior Team roster was further trimmed down to 23 players following Friday’s Game 3. A total of 21 CHL players remain on the roster with one cut remaining before the team’s 22-man roster is finalized prior to the start of the tournament.