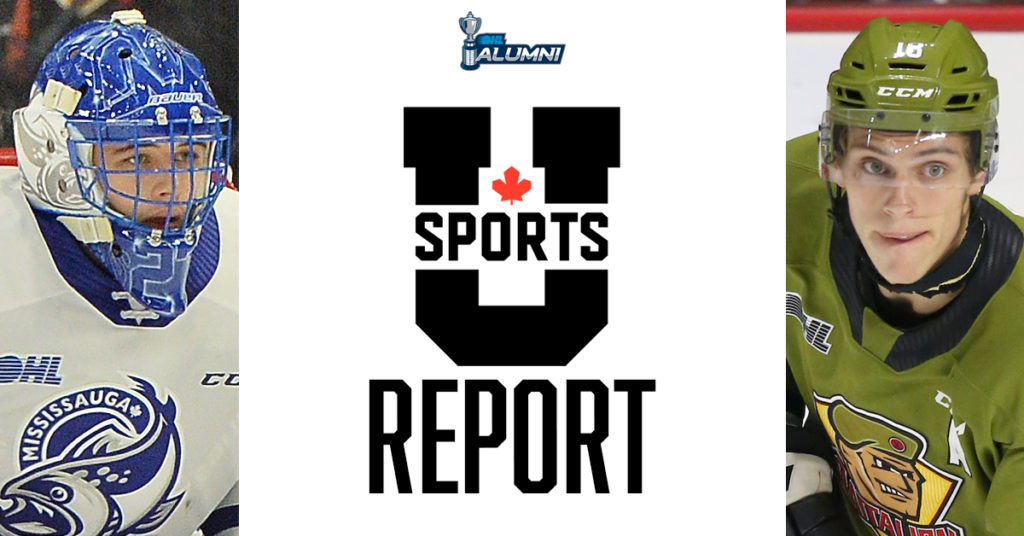 Four years after a bronze medal performance at the 2019 FISU Winter World University Games in Krasnoyarsk, Russia, Canada is ready to chase gold.

11 OHL alumni have been selected to wear the Maple Leaf in men’s hockey at the 2023 Games in Lake Placid, New York.

Oshawa Generals alumni Kyle Bollers headlines Team Canada’s offence, entering the tournament as this season’s U SPORTS leading scorer. The Toronto Metropolitan University Bold forward has registered 27 points (1215-27) in 16 games played this season, leading his team to second place in the OUA’s Western Conference. Entering the OHL as a free-agent, Bollers spent two seasons with the Saginaw Spirit before ending his junior career with the Generals.

U SPORTS Second Team All-Star Matthew Struthers will be a player to watch as the veteran forward currently ranks second in AUS scoring, recording seven goals, 18 assists and 25 points in 15 games played. The Milton, Ont. native spent five seasons in the OHL, recording 217 points (91-126-217) in 298 contests with the Owen Sound Attack and North Bay Battalion. His younger brother, Ryan, currently plays for the Mississauga Steelheads.

Erie Otters alumnus Kyle Maksimovich will also lace up for the FISU team, as the UPEI forward has tallied 12 goals, 11 assists and 23 points this season. The Hamilton, Ont. native ranks third among point-getters in the conference so far this year. Maksimovich spent five seasons in the OHL, finishing his final year with the Ottawa 67’s.

A pair of UNB Reds teammates in Austen Keating and Brady Gilmour will continue their demonstrated success in January, with both scoring greater than a point-per-game this season. Saginaw Spirit graduate Gilmour has been his team’s leading point-scorer, recording three goals, 16 assists and 19 points over 18 games played. Following closely in his footsteps is Ottawa 67’s graduate and former Overage Player of the Year Keating, registering nine goals, nine assists and 18 points. With the help of their forwards, the Reds rank 1st in the country heading into the break.

Former OHL champion Liam Hawel looks to put numbers on the board, as the STFX X-Men forward currently leads the AUS in scoring this season with 12 goals, 15 assists and 27 points in 18 games. Hawel, who played for Sault Ste. Marie, Guelph and Kitchener during his OHL career, was named Most Valuable Player following a conference-leading 37-point campaign with 18 goals and 19 assists in 24 contests last season. The Arnprior, Ont. native was also named AUS Rookie of the Year and a First Team All-Star. He was selected by the Dallas Stars in the fourth round of the 2017 NHL Draft.

Kitchener Rangers graduate Jonathan Yantsis is the final OHL alumni to join the offensive line, recording five goals, two assists and seven points for the Queen’s Gaels this season. The Markham, Ont. native tallied 149 points (97-52-149) in 214 games played throughout his OHL career, including 50 goals in his third-year season with the Rangers.

Former Oshawa Generals blueliner Matt Brassard is expected to play a major role in Canada’s success. The UPEI Panther currently sits as the country’s leading scorer among defencemen with 23 points in 18 games (3-20-23) heading into the new year. Brassard, who was a seventh round pick of the Vancouver Canucks in 2017, spent four seasons in the OHL, splitting his career between the Generals, the Barrie Colts and the Niagara IceDogs.

Kitchener Rangers alumni Justin MacPherson also joins the blueline, adding to his successful year with the Saint Mary’s Huskies. The 2022 U SPORTS Second Team All-Canadian currently ranks second in points scored by a defenceman this season, recording two goals, 16 assists and 18 points. MacPherson spent four seasons in the OHL with the Rangers and Niagara IceDogs, recording 67 points (7-60-67) in 234 games played.

Former Mississauga Steelheads netminder Kai Edmonds is one of three goaltenders to be named to the 2023 Team Canada roster. The Toronto Metropolitan University Bold rookie has been outstanding between the pipes this season, recording 10 wins (10-2-0-0), a goals-against average of 2.16 and a save percentage of .927. Originally selected in the 11th round (216th overall) by the Barrie Colts in the 2016 OHL Priority Selection, Edmonds split three seasons in the OHL between the Colts and the Steelheads.

The 31st edition of the FISU Games is set for January 11-22, with the men’s hockey event running from January 12-22. The preliminary round will be played in Canton, NY, before moving to Lake Placid’s historic Olympic Center 1980 Rink for the medal round.

Team Canada will open its tournament on Thursday, January 12th at 1:00 pm EST against Ukraine.