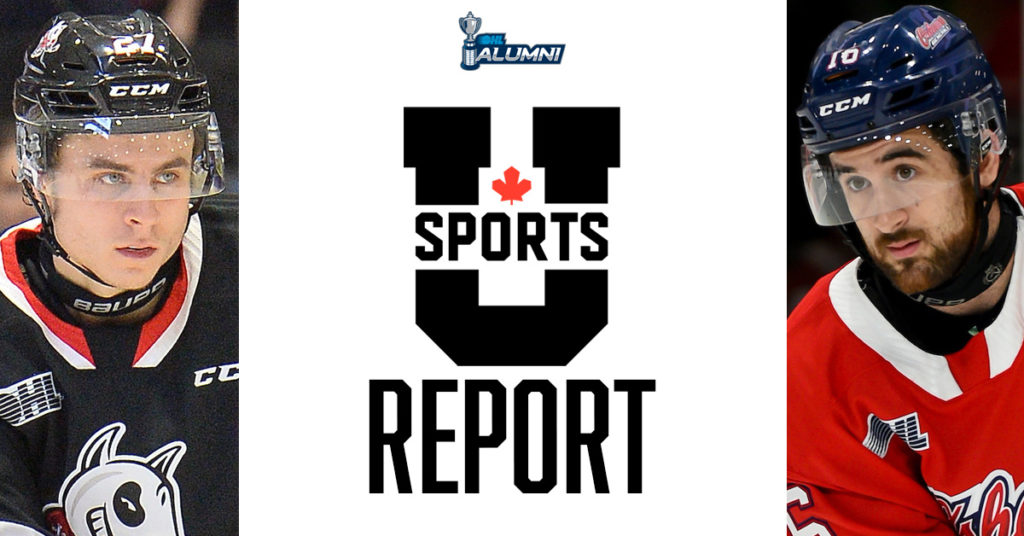 After trailing 1-0 in the first period, the Badgers came out hot in the second with goals from Kingston Frontenacs alumnus Tyler Burnie and London Knights graduate Tyler Rollo. Brock held a 3-2 lead midway through the third period as Niagara IceDogs graduate Ethan Sims and Owen Sound Attack alumnus Justin Brack each added a goal to the win. Brack finished the game with a goal and two assists while Guelph Storm grad Jacob Roach also contributed a helper.

The Badgers built off their Friday momentum, as they secured a 5-1 victory against the Waterloo Warriors on Saturday.

Burnie contributed a goal, while Roach chipped in two assists to improve Brock’s record to 4-1 in their last five games. Brock saw some solid goaltending as former Kingston Frontenac and Oshawa General Mario Peccia made 19 saves to improve to 4-2 between the pipes.

The University of Prince Edward Island Panthers are playing some of their best hockey in recent memory, having won nine of their last 10 games, including Wednesday night’s 2-0 victory over the Acadia Axemen.

Sudbury Wolves graduate Drake Pilon got the team going early in the game, scoring his fifth goal of the season, while Sarnia Sting alumnus Troy Lajeunesse added a late third period goal to the win.

The Panthers continued their winnings on Friday as they took on the Saint Mary’s Huskies in a high-scoring 8-4 affair.

Former Oshawa Generals forward Ryan Stepien went off for a hat trick, while Niagara IceDogs alumnus Matt Brassard assisted on four goals. Pearson also finished with a goal and two assists for the Panthers. Other PEI goals came from Henry, Pilon and Lajeunesse as the Panthers extend their winning streak to five consecutive games, improving to sixth in the U SPORTS National Rankings.

The University of Guelph Gryphons clinched two wins last week, as they opened up the weekend with a thrilling 3-2 shootout win against the Waterloo Warriors on Friday.

Hamilton Bulldogs alumnus Luke Kutkevicius recorded a goal and an assist, while Flint Firebirds graduate Jacob Winterton also lit the lamp for the Gryphons before scoring the shootout winner. Mississauga Steelheads graduate Liam Ham contributed a pair of helpers in both Gryphons goals.

The Gryphons returned to the ice on Saturday night, defeating the rival Western Mustangs 3-2.

Anthony Tabak opened the scoring with an assist from Winterton, and Sarnia Sting alumnus Ashton Reesor also recorded an assist in the win.

The Gryphons now hold a record of 4-3-3 on the season.

🏒MHKY HIGHLIGHT: Anthony Tabak opens the scoring against the Mustangs after he finds his own rebound and then the back of the net!!#GryphonPride #GryphonHockey pic.twitter.com/0XPsPZkaQZ

The University of Ottawa Gee-Gees men’s hockey team swept their first weekend homestand of the season, defeating RMC and Queen’s on consecutive nights.

Ottawa topped RMC 5-4 Friday night, and followed that up with a 4-3 win over the Gaels on Saturday.

Ottawa now sits in third place in the OUA East with a 8-5-0 record, although they’ve played more games than most of their Ontario counterparts.

0:19
Mississauga Steelheads Ryerson Leenders
Real Canadian Superstore Save of the Night: Leenders Lunges Across!
23 hours ago