U SPORTS Report: OHL grads atop the leaderboards 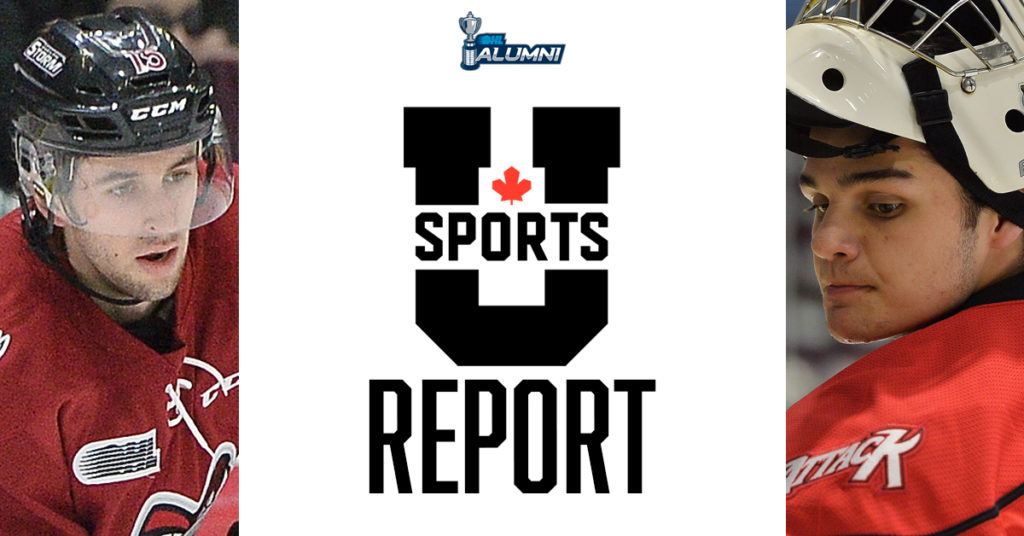 Leading the OUA in points this season, there’s no surprise that Oshawa Generals alumni Kyle Bollers is continuing his success on the ice for the Toronto Metropolitan University Bold.

The TMU forward recorded a goal and two assists on Thursday as the Bold defeated the Brock Badgers 6-2 at home. Bollers’ tally ended up snapping a four-game goal drought for the Bold’s leading scorer.

Bollers currently sits atop of the OUA with 11 goals, 14 assists and 25 points in 14 games played this season.

The former Gennie had a stellar U SPORTS rookie year last season, totalling 13 goals, 12 assists and 25 points in 15 regular season showings as he led TMU to the U Cup Championships. Bollers ranked first in the OUA, was named the Bold’s Male Athlete of the Year, OUA Rookie of the Year, Team MVP and won the U Sports Community Service Award as well as the D.H. Craighead Award.

Bollers and the Bold currently sit at eighth in this week’s U SPORTS Rankings.

A two-win week has @tmuboldmhky back up one position to No. 8 in the latest Top 10 rankings!

The team closes the fall schedule this weekend when they head to Windsor to clash with the No. 7 Lancers in a pair of games. pic.twitter.com/pk9laACjsu

Heading over to the AUS, former Guelph Storm forward Liam Hawel has been a driving force for the St. Francis Xavier University X-Men as he now leads all of U SPORTS men’s hockey in points.

Sitting atop the AUS and U SPORTS leaderboards, Hawel has recorded 12 goals, 15 assists and 27 points in 16 games played for the X-Men this season.

Hawel, who also played for Sault Ste. Marie and Kitchener during his OHL career, recorded a goal and an assist on Wednesday as STFX defeated the Dalhousie Tigers 6-2. The X-Men continued their three-game winning streak on Friday as the Storm alumnus contributed three helpers in a 5-4 shootout win over the UPEI Panthers.

Hawel was named Most Valuable Player following a conference-leading 37-point campaign with 18 goals and 19 assists in 24 contests last season. The Arnprior, Ont. native was also named AUS Rookie of the Year and a First Team All-Star.

Hawel and the X-Men currently hold a 17-5-1-1 record, sitting second in the AUS standings.

In AUS men's hockey, @StFXAthletics earned back-to-back wins, while the @SMUHuskies turned away 50 shots to end a @UNBAthletics winning streak.

Former Oshawa Generals, Owen Sound Attack and Kitchener Rangers goaltender Nathan Torchia has had a stellar start for the University of Windsor Lancers men’s hockey team this season, backstopping the Lancers to the top of the Western Conference.

The netminder guided Windsor to victory this weekend, turning aside 26 of 27 shots faced as the Lancers defeated the Toronto Varsity Blues 3-1.

Torchia and the Lancers currently hold a 10-2-1-0 record, sitting seventh in the U SPORTS Rankings.