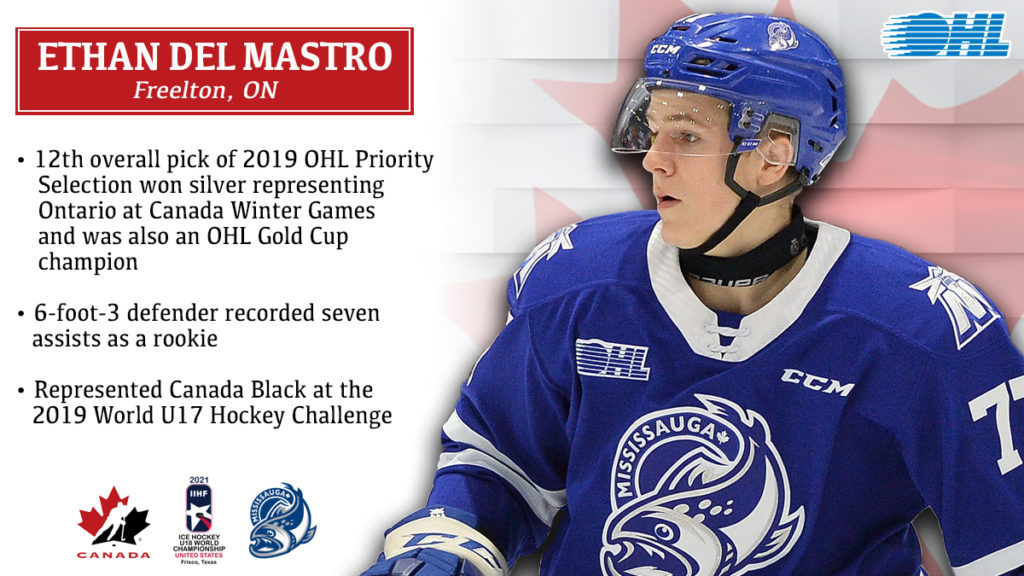 One of three OHL defenders representing Canada at the World Under-18 Hockey Championship in Frisco, Texas, Ethan Del Mastro will bring a calm presence on the defensive side while hoping to make an impression on NHL scouts in his draft year.

BIG MAN ON THE BLUE LINE
At 6-foot-4 and close to 200Ibs., Del Mastro joins Ottawa 67’s defender Jack Matier as the two biggest bodies on the Canadian blue line. The Steelheads nabbed Del Mastro with the 12th overall pick of the 2019 OHL Priority Selection, bringing in a sturdy two-way presence who defends well behind his own blue line. Dave Barr’s Canadian squad will be expecting much of the same from Del Mastro, who showed a willingness as an OHL rookie to lay the body and block shots when needed.

BIG PART OF STEELHEADS’ FUTURE
Del Mastro played in Mississauga’s top-four throughout his rookie season, often lining up against some of the OHL’s best forwards. Now 18, he’ll be a go-to option for Steelheads head coach James Richmond in 2021-22 as Liam Ham, Thomas Harley and Duncan Penman all move on.

BOOK SMARTS
Del Mastro was the Steelheads’ representative on the OHL Scholastic Team in 2019-20, being nominated for the Bobby Smith Trophy as OHL Scholastic Player of the Year. He was the Central Division’s Academic Player of the Month for January 2020, cited as a “quiet” and “diligent” student by his teachers.

Del Mastro and 12 other OHL players will hit the ice in Plano and Frisco, Texas on April 27th when Canada opens its tournament schedule against Sweden.