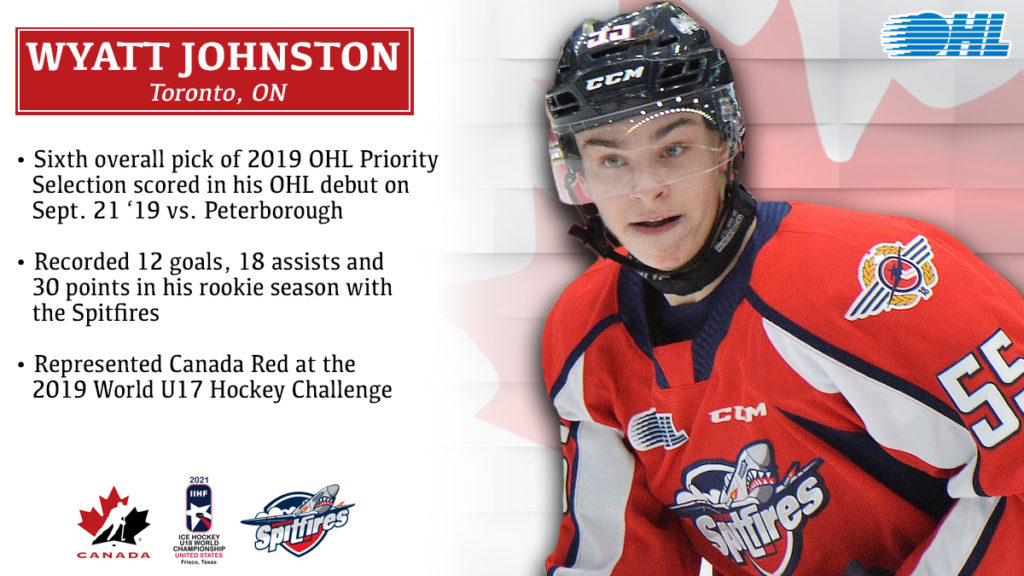 Dynamic Windsor Spitfires forward Wyatt Johnston brings another element of elite talent to the Team Canada lineup. Following an impressive rookie showing skating among the likes of Will Cuylle, Jean-Luc Foudy, Egor Afanasyev and Tyler Angle, the 17-year-old Toronto native is eager to take his talents to the international stage once again.

GETTING TO WORK IN WINDSOR
The sixth overall pick of the 2019 OHL Priority Selection, Johnston got to work right away with a goal in his OHL debut on Sept. 21, 2019 and went on to amass a solid 30 points (12-18—30) over his 53-game rookie campaign in Windsor. His impressive rookie output has placed him high on the 2021 NHL Draft radar with a “B” ranking in NHL Central Scouting’s “Players to Watch” list.

MARLIES REUNION
Johnston made waves with the hometown Toronto Marlboros organization in his 2018-19 minor midget year, collecting an outstanding 48 goals and 46 assists in 73 games. Joining him in the Team Canada ranks are former Marlies teammates Danny Zhilkin and Ethan Del Mastro.

REPRESENTING TEAM CANADA ONCE AGAIN
The Spitfires talent previously suited up for Team Canada Red at the 2019 World Under-17 Hockey Challenge where he was good for five points (2-3—5) in five games.

Johnston and 12 other OHL players will hit the ice in Plano and Frisco, Texas on April 27th when Canada opens its tournament schedule against Sweden.