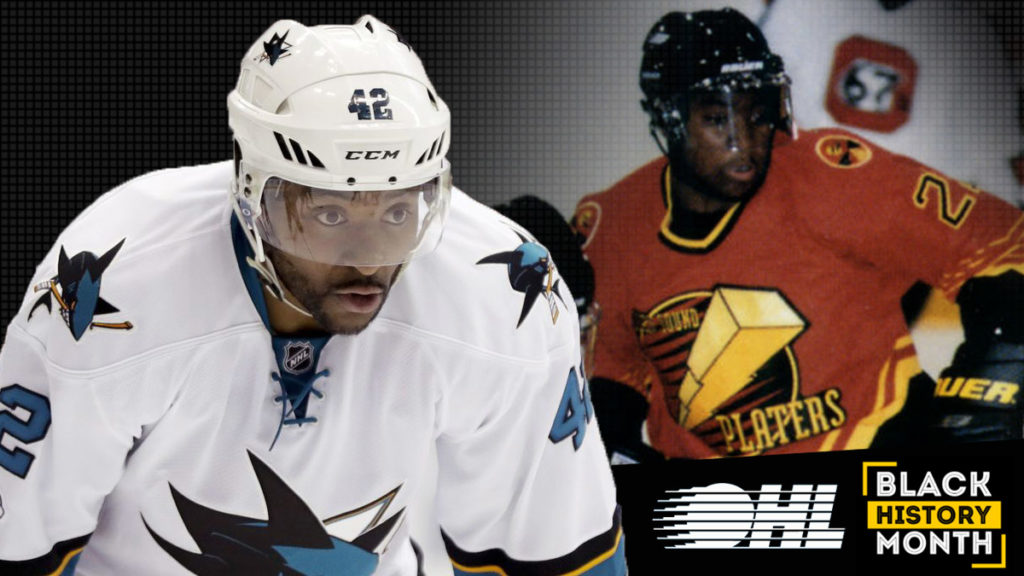 Joel Ward’s path to NHL success was one that overcame the odds on several fronts.

A native of Scarborough, Ont., born to immigrant parents from Barbados, Ward rose through the ranks and was faced with adversity early in his young life as his biggest fan passed away when he was just 14. Randall Ward instilled a love for hockey in his son, one that would carry him to great heights on the game’s biggest stage.

Ward’s mother, Cecilia, possesses a similar love for hockey and was the driving force behind Ward’s perseverance through the challenges he’d face upon becoming a 15th round pick of the Owen Sound Platers in the 1997 OHL Priority Selection.

Joel Ward (@JRandalWard42) went from being undrafted to playing 726 games in the @NHL with the @PredsNHL, @mnwild, @Capitals and @SanJoseSharks.

Today, he officially hangs up his skates.

Ward made the jump to the OHL just prior to his 17th birthday, joining a Platers club that included other eventual NHLers in the late Dan Snyder, Sean Avery, Adam Mair and hometown fan favourite Curtis Sanford between the pipes. He put up 12 points (8-4–12) in a 47-game rookie season in 1997-98 and followed that up with 35 (19-16–35) in his draft year, helping the Platers reach the Western Conference Championship Series before falling in five games to the London Knights.

Ward’s well-written Players Tribune entry published following his retirement back in April details a trip to the 1999 NHL Draft with his mother. There, he’d see Patrik Stefan selected first overall by Dallas followed by twins Daniel and Henrik Sedin second and third to Vancouver. It turns out his next meeting with the Sedin twins would come sooner than expected. For now though, Ward and his mother returned to Toronto having sat through nine rounds and 272 selections without hearing Joel’s name.

Back in Owen Sound, Ward finished out his OHL career under the coaching of Dave Siciliano and Brian O’Leary, scoring 23 goals in 1999-00 before graduating with 26 goals and 62 points as a member of the inaugural Attack squad in 2000-01.

Without a pro contract following a tryout with the Detroit Red Wings, the sturdy winger’s path would take him to the University of Prince Edward Island where he racked up 135 points (54-81–135) over four seasons, finishing up as the AUS Conference’s Most Valuable Player at 24-years-old in 2004-05. Playing under long-time coach Doug Currie, Ward earned team MVP honours three times while earning a sociology degree. His number 22 banner hangs from MacLauchlan Arena on the UPEI campus today.

Little did Ward know, a solid season with the AHL’s Houston Aeros would have him hearing Jacques Lemaire read out his name on the lineup card for his NHL debut just over a year later as a member of the Minnesota Wild on December 16, 2006. Lining up opposite him were the aforementioned Sedin twins and the Vancouver Canucks.

After 11 games with the Wild in 2006-07, Ward returned to Houston where he became a fan favourite, scoring 21 goals during the 2007-08 season to draw the interest of the Nashville Predators, who gave him a full-time NHL role at the age of 27.

“When people ask me how I ended up playing 726 (games), that’s what I tell ’em. I played every game – every single game – like it was the only one I’d ever have,” Ward wrote following the conclusion of his career. “That’s how I made it to this point.”

Ward never looked back, spending three seasons in Nashville, four in Washington and an additional three in San Jose before announcing his retirement last spring, rounding out his career having played 726 career regular season games.

Career highlights included his lone goal of the 2012 Stanley Cup Playoffs coming in overtime of Game 7 of the Eastern Conference quarter-final against the Boston Bruins to push the Capitals into a second round series against the New York Rangers. Ward also reached the Stanley Cup Final as a member of the San Jose Sharks in 2015-16, recording 13 points (7-6–13) in 24 playoff contests before the Sharks came up short against the Pittsburgh Penguins.

Ward also managed to represent Canada internationally for the first time in his career, putting up nine points (6-3–9) for Canada in eight games at the 2014 World Championships to be named one of Canada’s top three players in the tournament.

Now into retirement, Ward and his wife Kathleen have a young son named Robinson, named after baseball’s colour-barrier breaking legend Jackie Robinson who Ward honoured throughout his career by wearing the number 42. The hard-working winger has moved behind the bench where he’s an assistant coach with the AHL’s newest franchise, the Henderson Silver Knights, top affiliate of the Vegas Golden Knights.

Ward continues to champion the cause of encouraging greater diversity in the game of hockey, and is a shining example of a player who overcame numerous obstacles to achieve his goals, serving as a great role model for young players today.

As part of Black History Month celebrations in the month of February, the OHL is recognizing the contributions of Black players that have played a part in the unfolding story of the world’s premier development league.