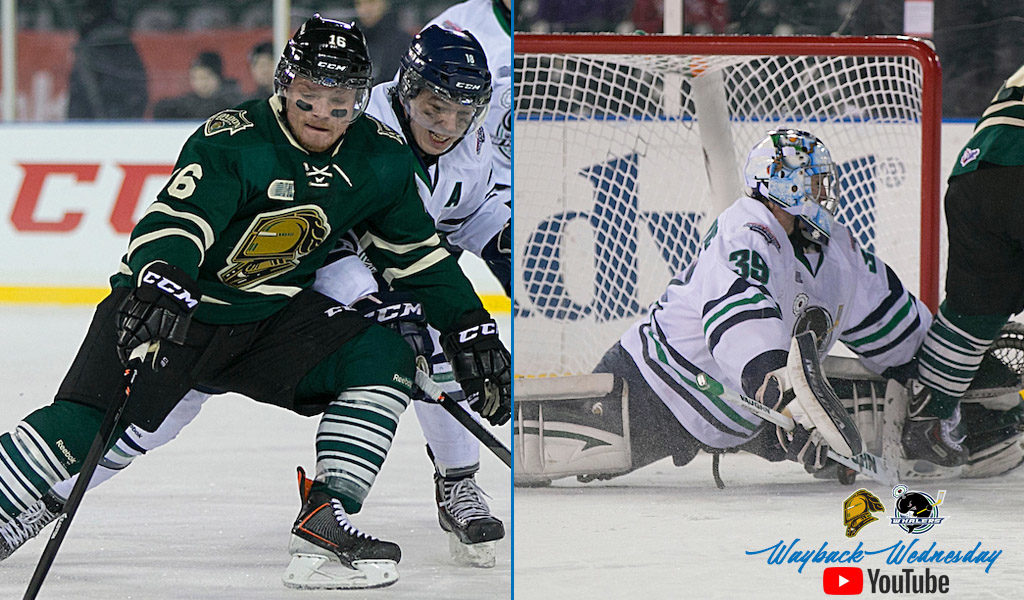 Anyone who followed OHL hockey midway through the past decade would be highly familiar with the names Alex Nedeljkovic and Max Domi.

The two OHL standouts turned accomplished professionals each starred in the first outdoor game in OHL history between the London Knights and Plymouth Whalers, one that took place in tandem with a Windsor Spitfires and Saginaw Spirit matchup at Comerica Park in Detroit, Mich. on December 29, 2013.

With tonight’s Knights/Whalers Outdoor Game Wayback Wednesday broadcast on YouTube, we decided to circle back and examine the careers and current trajectories of two well-known OHL Alumni.

The @LondonKnights and Plymouth Whalers take it outside on tonight’s #WaybackWednesday matchup!

It was already going to be an important game for Alex Nedeljkovic, but playing in the second matchup of the OHL’s first ever Outdoor Doubleheader made it all the more thrilling.

The Plymouth Whalers goaltender put on a dazzling display that evening at Comerica Park, backstopping his team to a 2-1 shootout win with 44 saves on the 45 shots he faced. In what was their first meeting since the 2013 Western Conference Final that saw London take the series 4-1, it was undoubtedly a meaningful win for Nedeljkovic and the team in front of him.

“To play the Knights and beat them in a shootout, words can’t describe what that feels like,” he told MIHockey.com following the win, and spoke of feelings of “joy” and “happiness” on stopping Ryan Rupert in the shootout to earn the W.

Nedeljkovic’s OHL tenure spanned four seasons, with stops in Flint and Niagara following a three-year stint minding nets with the Whalers. He won a silver medal with Team USA at the 2013 Ivan Hlinka Memorial Tournament and played in 2014 CHL/NHL Top Prospects Game ahead of hearing his name called by the Carolina Hurricanes 37th overall at the 2014 NHL Draft. Upon graduating from the League in 2016, he’s spent most of the last four seasons in net for the AHL’s Charlotte Checkers, backstopping them to a Calder Cup title in 2019 as the AHL’s Goaltender of the Year. He has suited up for six games at the NHL level, including four appearances over the 2019-20 season.

Nedeljkovic remains one of the youngest goaltenders in League history to claim OHL Goaltender of the Year honours, joining Brian Finley (Barrie, 1999) and Craig Hillier (Ottawa, 1996) as one of three to do it in his 18-year-old birth year.

The 2013-14 Knights boasted one of the most talented teams in the country, stacked with future NHL talent and headed by leading scorer and fan favourite Max Domi. Taking part in the one of the OHL’s first ever outdoor regular season games against the division rival Plymouth Whalers – in an MLB stadium, at that – was only one of many accolades he’d earn over his time in the League.

That Dec. 29 evening at Comerica Park marked the teams’ first game back following the holiday break, so the excitement around hitting the outdoor ice was even higher. Domi fed the puck to Chris Tierney who scored from the slot on a two-man advantage for the Knights’ lone goal in what would be a 2-1 shootout loss. Despite the loss, he dubbed the opportunity to suit up in the historic OHL night “the experience of a lifetime” remarking on the unexpected heated benches and the cold air that just made it “all part of the experience.”

Domi’s four-season stint in London was memorable from day one when he recorded a hat-trick as part of a four-point night in his OHL debut, an 8-0 blanking of the Saginaw Spirit. He’d finish atop the team scoring race twice and rack up 331 points over 244 games. He helped the Knights to consecutive OHL championships and three Memorial Cup appearances, including one as the host team in 2014. He also captured gold with Team Canada at the 2012 Ivan Hlinka Memorial Tournament and saw ice at the 2013 Top Prospects Game en route to being drafted 12th overall by the Arizona Coyotes at the 2013 NHL Draft. He won gold with Team Canada at the 2015 World Junior Championships in his final OHL season and rounded out his junior career with 102 points before heading to the NHL where he’s spent time with Arizona and Montreal over the past five years.

The Ontario Hockey League is proud to have a robust and engaged group of Alumni. Through the years, OHL Alumni have gone on to have exceptional careers both on and off the ice. We believe it is incredibly important to continue to engage and support Alumni across all generations. The OHL, in partnership with the Alumni Association are proud to have launched the OHL Alumni Mentorship program and we continuously look to expand this remarkable group. Through the Alumni Association, the mentorship program is designed to unite players past and present to create a robust network that facilitates connections, re-connections and professional support across all generations.

If you are an OHL Alumnus and are interested in joining our growing network of active alumni, please follow this link.