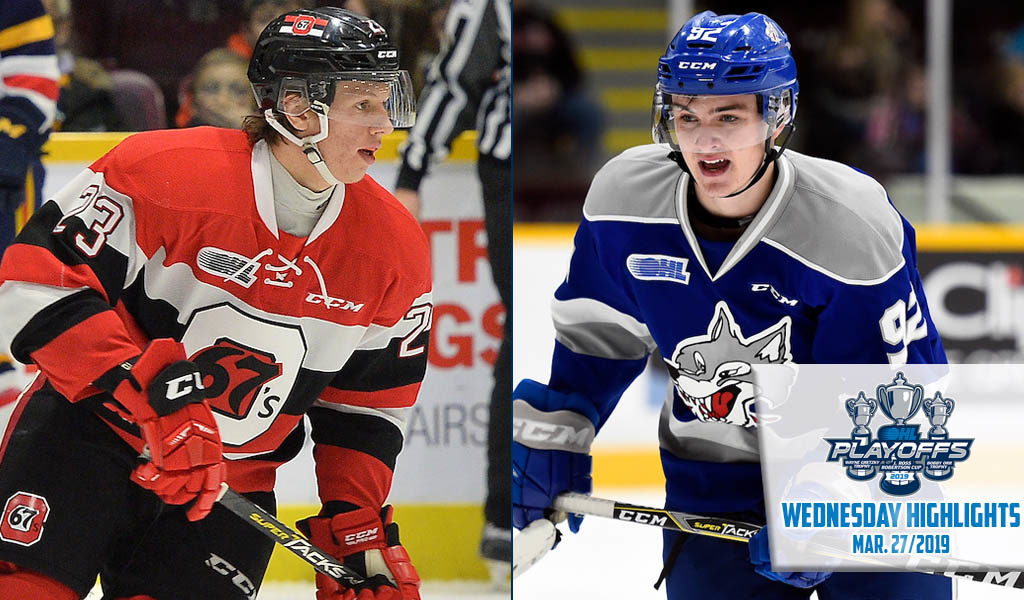 The Ottawa 67’s dethroned the defending OHL champions, taking a 7-2 victory in Game 4 to complete a four game first round sweep of the Hamilton Bulldogs. The 67’s dictated the play on Wednesday, climbing out to a 4-0 first period lead as Marco Rossi (1), Lucas Chiodo (1) and Merrick Rippon (1) each had a goal and an assist. Cameron Tolnai (1), Noel Hoefenmayer (3), Mitchell Hoelscher (3) and Kody Clark (2) also scored as the 67’s outshot the Bulldogs 45-27. Michael DiPietro captured his first career OHL Playoffs series victory, stopping 25 of 27 for the win while San Jose Sharks prospect Sasha Chmelevski finished with two assists. Eric Henderson (2) and Frank Jenkins (1) scored Hamilton goals in front of a 38-save performance from rookie netminder Zach Roy. The Bulldogs see their season come to an end after playing to a 29-34-3-2 record for eighth in the Eastern Conference. They were led in scoring by top 2019 NHL Draft prospect Arthur Kaliyev who put up the first 50-goal and 100-point season in Bulldogs history. Ottawa awaits its second round opponent as the 67’s earn their first series victory since 2012.
GAME CENTRE

The Sudbury Wolves are off to the second round, winning their first playoff series since 2013 with a 4-0 sweep of the Mississauga Steelheads. Blake Murray (3), Macauley Carson (1), Drake Pilon (1) and Peter Stratis (1) scored goals while Ukko-Pekka Luukkonen stopped 32 of 33, guiding the Wolves past the Mississauga Steelheads 4-1 on the road. Nick Isaacson (1) provided Mississauga’s lone marker while Jacob Ingham made 28 saves in the loss. The Eastern Conference’s fifth place Steelheads see their season come to an end after playing to a 32-29-5-2 record, bringing in some new faces following the departures of Owen Tippett and Ryan McLeod. The Wolves await their second round opponent. Rookie forward Quinton Byfield led Sudbury in first round scoring with seven points (3-4–7).
GAME CENTRE

The Soo Greyhounds continued their march back from a Game 1 loss, defeating the Owen Sound Attack 5-2 to take a 3-1 series lead. Morgan Frost (2, 3) and Jordan Sambrook (1, 2) each scored twice while Jaden Peca picked up three assists as the Greyhounds went 3-for-8 on the power play. Barrett Hayton (4) also found the back of the net while Matthew Villalta made 24 saves in the win. Brady Lyle (1) and Sergey Popov (2) scored Attack goals but the Bears ran into penalty trouble in this one, giving the Hounds the opportunities they’d need to take a 3-1 lead back to Sault Ste. Marie for Game 5 on Friday night.
GAME CENTRE

OHL Mourns the Loss of Bob Nevin
5 hours ago