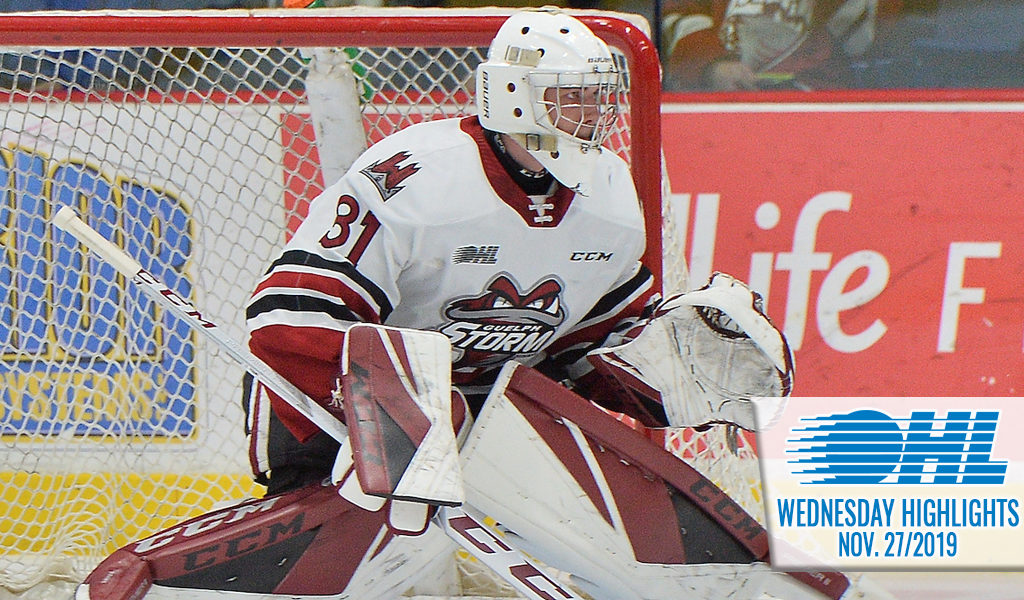 GUELPH 3, MISSISSAUGA 1
Draft eligible netminder Owen Bennett stopped 39 of 40 as the Guelph Storm claimed a 3-1 School Day game win in Mississauga. Guelph’s Matthew Papais (3) opened the scoring 11:25 into the second period with help from Cooper Walker before sophomore defenceman Daniil Chayka (7) provided insurance on the power play 2:33 into the third. Mississauga’s Richard Whittaker (6) broke up Bennett’s shutout bid with 7:10 left in the third before Eric Uba (8) hit the empty net to give the Storm their 11th win in the past 12 games. Mississauga’s Kai Edmonds stood tall, making 34 saves in the loss. Guelph improves to a Midwest Division-leading 14-4-1-3 while the Steelheads have now dropped four in a row, falling to 7-16-1-0.
GAME CENTRE

SAGINAW 8, FLINT 3
The Saginaw Spirit came surging past the Flint Firebirds in a lopsided 8-3 contest at the Dort Federal Event Center. Dalton Duhart’s (2) second of the season opened the scoring for Saginaw 5:28 in, but Flint responded with a couple of early goals to briefly take the lead. Saginaw responded with two of their own to finish the first period up at 3-2. Third-year Jake Goldowski (7) gave the Spirit their fourth of the game, but Emmet Pierce’s (1) first goal of the season cut Saginaw’s lead to 4-3. The Spirit scored four unanswered goals, including two from 2020 NHL Draft hopeful Cole Perfetti (11, 12), to bring their lead up to a final 8-3. Philadelphia Flyers draft pick Mason Millman picked up three assists on the night, and Saginaw goaltender Tristan Lennox saved 32 of 35 shots faced. The Spirit improve to 13-8-1-1 on the season and continue to linger at third place in the West Division with 28 points, just two below the Firebirds, who fall to 15-8-0-0.
GAME CENTRE

OTTAWA 11, KINGSTON 6
Six Ottawa players earned multi-point games in an explosive offensive effort from the 67’s on Wednesday night in Kingston. The Barber Poles earned their fifth straight win in an 11-6 victory over the Frontenacs, effectively bringing Kingston’s win streak to a screeching halt. Dawson Baker (8) got the Fronts on the board first, but the next five goals would all come from Ottawa, including two each for Austen Keating (11, 12, 13) and Marco Rossi (11, 12, 13), who would both eventually complete their hat tricks. Rookie Francesco Arcuri (2) gave Kingston their second of the night, but Ottawa responded with three more, rounding out their five-goal period. A back and forth final twenty minutes would up the score to a final 11-6 in Ottawa’s favour. Keating, a fifth-year 67, finished the game with a career-high seven points, while Rossi, a top 2020 NHL Draft hopeful, picked up six on the night and moved into 5th place in OHL scoring. He ties Hamilton’s Jan Jenik for the most assists among all OHL players with 31. Joseph Garreffa (13) and Noel Hoefenmayer (8) had four-point nights, while Yanic Crete (4, 5) and Jack Beck had two-point efforts. The unstoppable 67’s are now back in first place with an 18-6-0-0 record, while the Frontenacs fall to 5-15-2-2 on the year.
GAME CENTRE