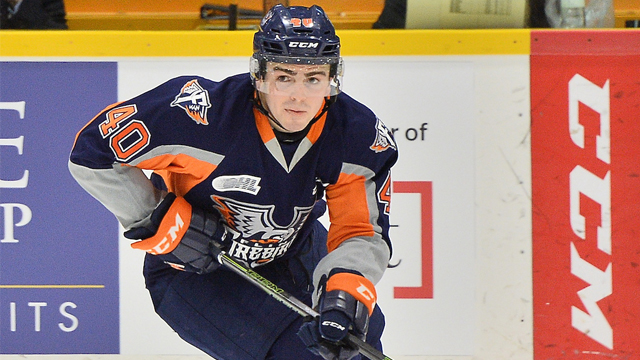 FLINT 6 – SARNIA 3
The Flint Firebirds had a quick trigger on Wednesday, scoring inside the opening minute of all three periods in a 6-3 road win over the Sarnia Sting. With the win, the Firebirds widen their lead over eighth place Sarnia to five points with eight games remaining on the schedule. Fourth-year veteran Ryan Moore (36, 37) had two goals and an assist and finished plus-5 on the night while linemates Maurizio Colella (16) and Kole Sherwood (32) each had a goal and three helpers. Ryan Littlejohn (1) and Alex Peters (8) also found the back of the net as the Firebirds won for the seventh time in the last 10 games. Adam Ruzicka (24), Drake Rymsha (28) and Jordan Kyrou (29) all scored for the Sting who remain nine points up on Saginaw for the final playoff spot in the Western Conference. With a goal and an assist to his credit, Kyrou extends his current point streak to 25 games, one shy of Jeremy Bracco’s 2016-17 season high of 26.
GAME CENTRE

OSHAWA 6 – KINGSTON 2
The Oshawa Generals got back on the winning track, ending a four game losing skid thanks to two goals from 2017 NHL Draft prospect Jack Studnicka (16, 17). Latvian forward Renars Krastenbergs (8) put home a backhander with 6:52 remaining in the third to give the Generals a 4-2 lead and they never looked back, improving to 35-20-3-2 on the season. Jeremy Brodeur made 38 saves for the Generals while Kyle MacLean (5), Sullivan Sparkes (5) and Serron Noel (8) also had goals. The Frontenacs miss out on a chance to clinch a playoff berth as Nathan Dunkley (6) and Brett Neumann (11) had goals in the loss. The Generals improve to 4-1-1-0 against Kingston this season and draw within two points of first place Peterborough atop the East Division.
GAME CENTRE