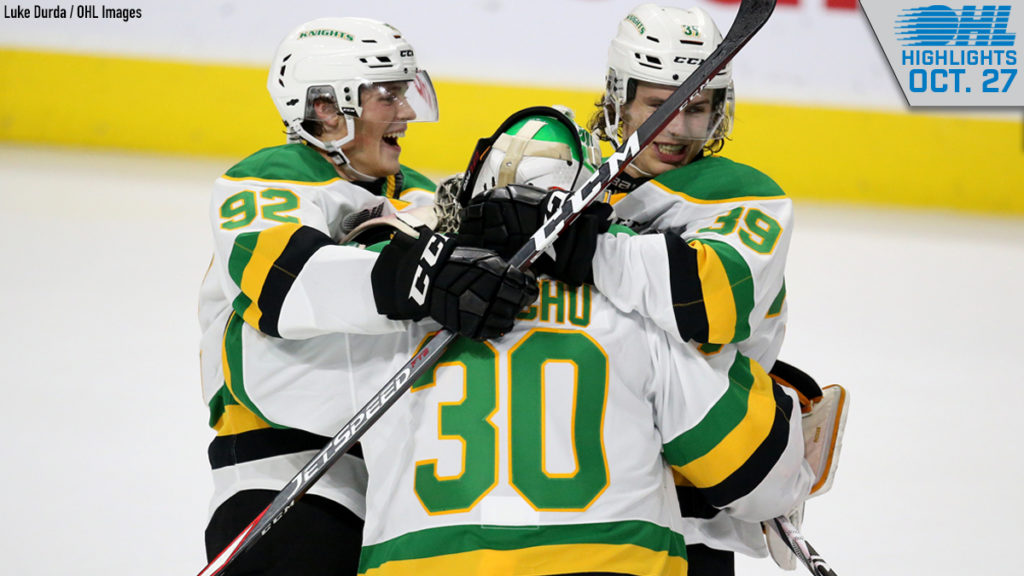 LONDON 4, OWEN SOUND 1
– Captain Luke Evangelista scored a pair of goals as the Knights took down the Attack 4-1 for their seventh straight win.
– Dallas Stars prospect Antonio Stranges put up two assists.
– Max McCue and Colton Smith also found the back of the net in the win.
– Deni Goure got the Attack on the board with his fifth of the season.
– Andrew Perrott led with six shots on net.
– Brett Brochu recorded 32 saves on 33 shots and picked up an assist while Owen Sound’s Corbin Votary totalled 31 saves on 34 shots.
– London’s Brody Crane served the first game of a three-game suspension.
GAME CENTRE & HIGHLIGHTS

SAGINAW 4, FLINT 1
– The Spirit defeated the Firebirds 4-1 at home with a pair of goals from Dalton Duhart, one of which was shorthanded.
– Buffalo Sabres prospect Josh Bloom also scored a shorthanded goal in the win.
– Saginaw’s Dean Loukus scored his fourth goal in two games.
– Amadeus Lombardi scored his first OHL goal for the Firebirds.
– Rookie netminder Andrew Oke solved 27 of 28 shots in the place of an injured Tristan Lennox for Saginaw while Luke Cavallin and Nathaniel Day combined for 19 saves on 23 shots in the Flint crease.
GAME CENTRE & HIGHLIGHTS

Duhart gets his second of the night and the @SpiritHockey‘s second shorty of the period!

SAULT STE. MARIE 3, KITCHENER 1
– St. Louis Blues prospect Tanner Dickinson recorded a goal and an assist in his Greyhounds’ 3-1 defeat of the Rangers. Dickinson’s nine game point streak is the longest in the League this season.
– Cole MacKay opened the scoring with his sixth of the season and sits atop League scoring with 15 points alongside teammate Rory Kerins. Marc Boudreau also found the back of the net for the Greyhounds.
– Rangers first round pick Carson Rehkopf scored his first OHL goal.
– MacKay and Tye Kartye finished the night with six shots on goal each.
– Samuel Ivanov made 21 saves for the win opposite Kitchener’s Pavel Cajan, who stopped 32.
– The shots ended 35-22 in favour of the Greyhounds.
GAME CENTRE & HIGHLIGHTS

End-to-end drive and a flawless finish 👌@StLouisBlues prospect @TannerHKY97 adds some insurance as @OHLHoundPower skate away with the win 🎥 pic.twitter.com/zkgVTUEkkW