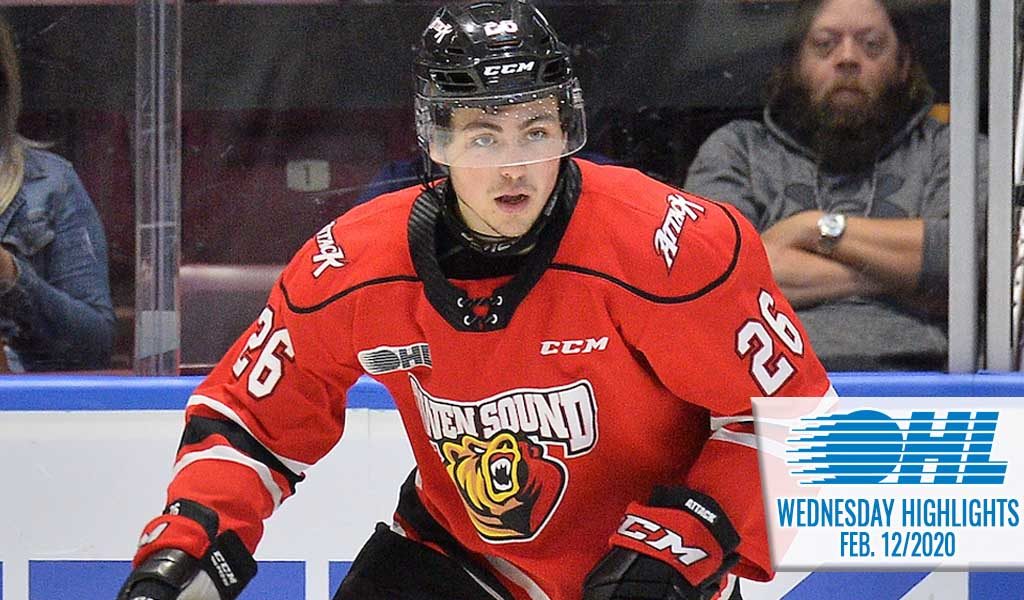 OWEN SOUND 5, HAMILTON 1
Kaleb Pearson’s (23, 24) two goals and four points propelled the Owen Sound Attack past the visiting Hamilton Bulldogs by a score of 5-1 to earn their fourth straight win. Sergey Popov (19) and Pearson struck in the first period before Carter Robertson (9) and Kaleb Lawrence (5) found the back of the net less than a minute and a half apart. Pearson potted his second goal 1:12 into the third period to give the Attack a 5-0 advantage. He now has seven goals and 12 points over his last four games. Hamilton’s Lawson Sherk (3) spoiled Mack Guzda’s shutout bid with 5:24 remaining in the third period. Guzda turned aside 25 of 26 for the win while Hamilton’s Zachary Roy made 24 saves in relief for the Bulldogs. Owen Sound improves to 26-19-3-3 on the season while the Dogs fall to 21-24-6-1.
GAME CENTRE

BARRIE 4, ERIE 3 SO
Rookie Brandt Clarke netted the lone shootout goal in his Barrie Colts’ 4-3 win over the host Erie Otters. Fourth year OHLer Josh Nelson (10) scored in the final minute of the opening period and Erie winger Hayden Fowler (18) followed it up with his first of two on the night five minutes into the middle frame. Sophomore Kyen Sopa (18) brought the Otters up in front on a breakaway at the 15:39 mark but rookie Jacob Frasca (6) responded with the tying goal minutes later. Fowler (19) found the back of the net once again to reclaim the lead until Evan Vierling (9) evened things up with 32 seconds left in regulation, forcing an eventual shootout where Clarke would eventually secure the win. Jet Greaves ended the night with 33 saves on 36 shots, while Erie rookie Aidan Campbell stopped 28 of the 31 shots he faced. The Colts’ record bumps up to 23-22-3-2 as they hover at third in the Central Division, trailing the Mississauga Steelheads by a point. The Otters maintain their eighth place spot with a 21-20-4-7 tally.
GAME CENTRE

OSHAWA 5, KINGSTON 4
Brett Neumann (37) wrapped up a three-point night, scoring the game winning goal with just 39 seconds left to edge the Kingston Frontenacs 5-4 in front of an Oshawa audience. Brett Harrison (16) and rookie Oliver Suni (10) gave the Generals a 2-0 lead that was soon spoiled by Kingston’s Nick Wong (12) and Lucas Rowe (8). Another two-goal Oshawa advantage came off the sticks of NHL Draft hopeful Ty Tullio (25) and Montreal Canadiens prospect Allan McShane (21), before Kingston rookie Shane Wright (32) cut their lead in half. Jordan Frasca (13) evened the score with 1:14 to go in the third period, but Neumann snuck in a final goal as the clock ran its course to avoid overtime and earn the two points. The Fronts put 35 shots on goaltender Jordan Kooy, who finished the night with 31 saves to his name. At the other end of the ice, Ryan Dugas totaled 21 saves on the 26 shots he faced. The Gens see their record improve to 27-18-4-2 as they continue to sit third in the East Division, while the Frontenacs remain fifth at 17-30-2-2.
GAME CENTRE

SAGINAW 7, SOO 5
Cole Perfetti registered five primary assists and Damien Giroux (33) scored the game winner with 5:34 remaining to help propel the Saginaw Spirit to a 7-5 road win over the Soo Greyhounds. Carolina Hurricanes draftee Ryan Suzuki (13) and New York Islanders pick Cole Coskey (28) gave the Spirit a 2-0 lead before Tanner Dickinson (6) and Rory Kerins (27) came back to tie things up as the first period drew to a close. Coskey’s goal was the 100th of his OHL career, making him the third player in Spirit franchise history to reach the century mark. Fellow New York Islanders draftee Bode Wilde (1) scored on a one-timer in his first game back with the Spirit after being reassigned by the AHL’s Bridgeport Sound Tigers this week. A marker from Robert Calisti (15) and another off the stick of Kerins (28) pushed the Soo in front, until DJ Busdeker (15) and Coskey (29) responded to reclaim the Saginaw lead. Cole MacKay (24) netted the tying goal, but Giroux gave the Spirit back the lead before Busdeker (16) added an empty netter within the game’s final minute. Suzuki finished the night with four points to his name, while Coskey and Busdeker amassed three each. The Greyhounds outshot the Spirit 28-25 and continue to own fourth place in the West Division with a 24-27-2-0 tally. The Spirit maintain their position atop the division and see their record bump up to 33-15-2-2 on the year.
GAME CENTRE