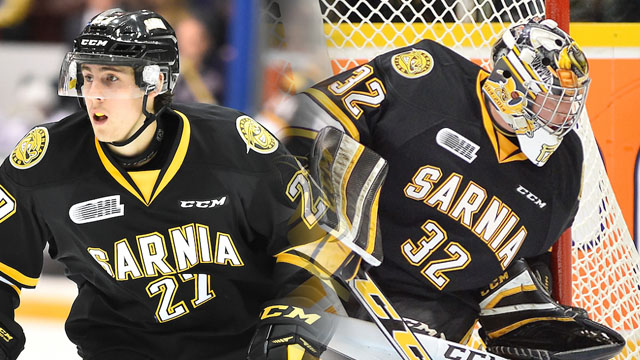 SARNIA 4 – WINDSOR 2
The Sarnia Sting are off to the OHL Playoffs, punching their ticket with a 4-2 win over the visiting Windsor Spitfires. Justin Fazio turned aside 41 shots as the Sting were outshot 43-27 in the victory. Sean Josling (10, 11) had a pair of goals while Ryan McGregor (14) and Anthony Salinitri (26) also lit the lamp. Blueliners Kevin Spinozzi and Theo Calvas gathered a pair of assists each while Jordan Kyrou failed to record a point in the win and sees his point streak come to an end at 30 games. Aaron Luchuk (26) and Hayden McCool (8) scored goals for Windsor who, despite the loss, are locked into the fifth seed in the Western Conference. Sarnia is the eighth and final team to clinch a Western Conference playoff position.
GAME CENTRE

OSHAWA 4 – BARRIE 2
Matt Brassard (12) scored the eventual game winner against his former club 2:29 into the third period as the Oshawa Generals defeated visiting Barrie 4-2. Domenic Commisso (19), Kenny Huether (16) and Jack Studnicka (18) also had markers for the Generals who earn their third straight win. Jeremy Brodeur turned in another solid outing in the crease, making 36 saves as the Generals were outshot 38-31. Zach Magwood (17, 18) provided both goals for Barrie in the loss.
GAME CENTRE

SAGINAW 2 – SAULT STE. MARIE 1
The Saginaw Spirit defeated the West Division Champion Soo Greyhounds for the second time this season, but with a Sarnia victory over Windsor, the Spirit were eliminated from OHL Playoff contention despite the positive result. Overage winger Hayden Hodgson (38) scored the game winner 2:54 into the third period to lift the Spirit to victory while Evan Cormier made 26 saves. Detroit Red Wings prospect Filip Hronek (14) also found the back of the net as the Spirit improved to 27-30-7-2. Morgan Frost (19) provided the lone Sault Ste. Marie goal as the Hounds lost in regulation for the first time in 10 games. The Greyhounds trail first place Erie by three points in the Western Conference with two games remaining on their schedule.
GAME CENTRE

PETERBOROUGH 2 – OTTAWA 0
Scott Smith earned his first career OHL shutout, stopping all 24 shots he faced to backstop the Peterborough Petes to a 2-0 win in Ottawa. Logan DeNoble (33) scored 8:07 into the first period and that’s the way the score would remain until Steven Lorentz (29) hit a gaping cage inside the final minute as the Petes improve to 41-20-2-3 and wrap up the season series with a 6-2 record against the 67’s. Leo Lazarev made 25 saves for Ottawa in the loss as the 67’s remain two points up on seventh place Niagara in the Eastern Conference with two games remaining.
GAME CENTRE