Wednesday Highlights: Sting stick with it 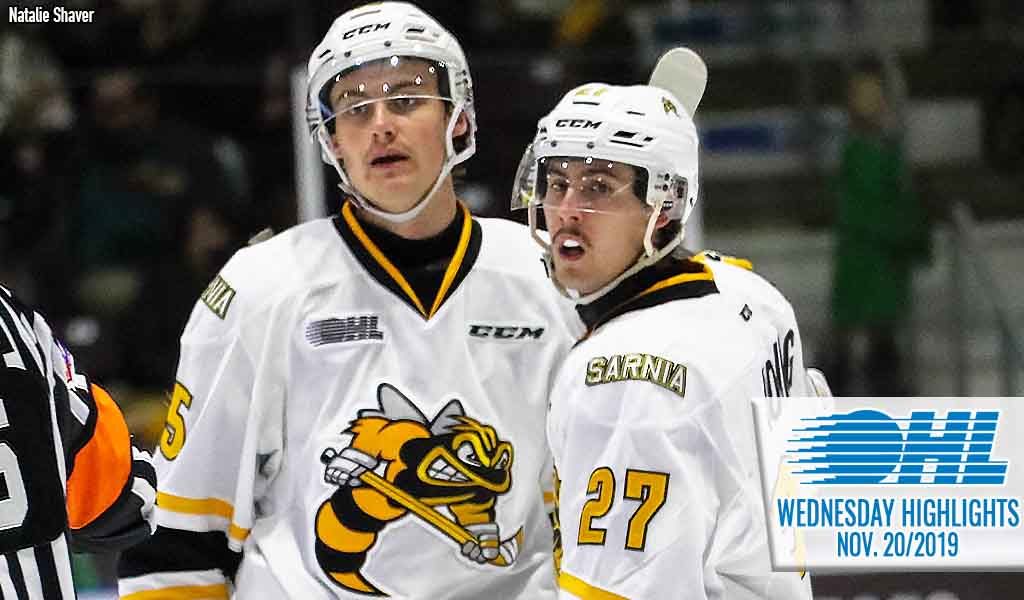 SARNIA 6, FLINT 4
The Sarnia Sting fell behind 3-1 on a Ty Dellandrea (9, 10, 11) hat-trick, but the black and yellow persevered in front of a home crowd, buzzing back to defeat visiting Flint 6-4. Three second period goals in a span of 1:04 turned the tables as Sarnia bounced back from a pair of weekend losses to best the Firebirds and take their seventh win in the past 10. Overage winger Sean Josling (20, 21) scored twice and added two assists for Sarnia while Jamieson Rees (12), Jacob Perreault (9), Sam Bitten (7) and Ryan Roth (11) also found the scoresheet. The chippy game saw the Sting outshoot Flint 40-32 and go 2-for-7 on the power play to the Firebirds’ 3-for-6 clip on the man advantage. Dellandrea’s second career OHL hat-trick saw him record his 73rd goal in a Firebirds uniform, putting him ahead of Ryan Moore for the most in club history. Jake Durham (11) also scored for the Firebirds as they dropped a second straight and fell to 13-8-0-0.
GAME CENTRE

PETERBOROUGH 4, HAMILTON 3
The Peterborough Petes took two points in front of 8,777 screaming students in Hamilton as the Bulldogs hosted their annual School Day game. The win gave the Petes an OHL-leading 31 points in the standings as San Jose Sharks prospect Zach Gallant (9, 10) earned first star honours with a pair of goals while Tucker Robertson (3) and Michael Little (3) also scored. Down 2-1 to start the second, the Petes scored three consecutive to take a 4-2 lead, holding off the Bulldogs late to improve to 15-6-1-0. Bulldogs forward Jan Jenik (18, 19) climbed into the OHL scoring lead, extending his point streak to 21 games with two goals and an assist. Los Angeles Kings prospect Arthur Kaliyev scored his league-leading 25th goal of the campaign as Hamilton fell to 10-13-1-0. The Petes outshot the Bulldogs 47-29 as Hamilton rookie Marco Costantini turned aside 43 shots. Peterborough’s Hunter Jones improved to 14-3-1-0 with a 26-save showing.
GAME CENTRE