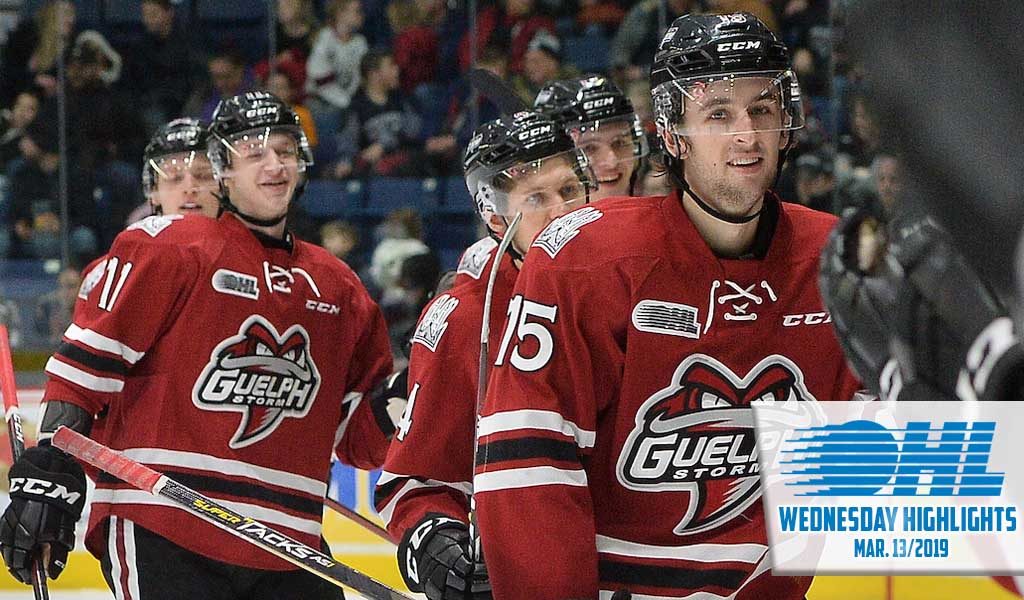 GUELPH 5, LONDON 1
London’s Alex Formenton (13) opened the scoring before the Guelph Storm responded with five unanswered goals in a 5-1 victory on home ice. Nico Daws earned first star honours with 30 saves to his credit as the Storm prevailed in a chippy, hard-hitting affair. Arizona Coyotes prospect Nate Schnarr (33, 34) scored twice while Dmitri Samorukov (10), Liam Hawel (37) and Domenico Commisso (10) also found the back of the net. Pavel Gogolev had an assist in his first action since Jan. 2nd. The Storm outshot the Knights 34-31, going 3-for-7 on the power play. The Storm wins for the eighth time in the past 10 games, improving to 38-18-6-4. London drops to 45-14-6-1, two points up on the Saginaw Spirit for first in the Western Conference. Guelph took four of six against the Knights on the season series.
GAME CENTRE

KITCHENER 6, ERIE 3
Dallas Stars prospect Riley Damiani (27, 28, 29) potted his second hat-trick of the season as the Kitchener Rangers secured fifth place in the Western Conference with their third straight win. The Blueshirts claimed a 6-3 road win in Erie as Joseph Garreffa (31) chipped in with a goal and an assist while Rickard Hugg picked up three assists and Greg Meireles stretched his point streak to 18 games with two helpers. Jonathan Yantsis (46) scored in a third straight game while Tampa Bay Lightning prospect Alexey Lipanov (10) also found twine for the Rangers. Luke Richardson stopped 36 of the 39 shots that came his way, surrendering Erie goals by Jack Duff (4), Mathew MacDougall (16) and Gera Poddubnyi. The Rangers hold a 33-29-3-1 record with two games remaining ahead of a first round playoff matchup against the Guelph Storm. The 26-36-3-1 Otters suffer a second straight loss and remain two points back of eighth place Windsor in the Western Conference. The two teams split their season series with three wins apiece.
GAME CENTRE

OSHAWA 3, KINGSTON 2
The Oshawa Generals prevailed in the front end of a home-and-home with the Kingston Frontenacs as Allan McShane (32), Kyle MacLean (17) and Anthony Salinitri (46) scored in a 3-2 win on home ice. New York Rangers prospect Nico Gross earned first star honours with a pair of assists as the Gennies outshot the Frontenacs 41-22. Ryan Cranford (18) and Nick Wong (13) had goals in front of Kingston netminder Brendan Bonello who earned third star recognition with a 38-save performance. Though he’s split the season between Oshawa and Sarnia, Salinitri’s 46 goals are the most by a Generals player in a single season since Christian Thomas netted 54 back in 2010-11. Oshawa ahead of the Sudbury Wolves and into third place in the Eastern Conference with a 42-2-4-0 record. Kingston suffers its 50th loss at the bottom of the Eastern Conference.
GAME CENTRE

OWEN SOUND 5, BARRIE 1
The Owen Sound Attack won their 30th game for the ninth straight year as Cade Robinson (8, 9) scored twice in a 5-1 victory over the visiting Barrie Colts. Adam McMaster (17), Manuel Alberg (2) and Kaleb Pearson (14) also scored for the Bears who outshot the Colts 36-18 and went 2-for-6 on the power play. Ben Hawerchuk (27) provided Barrie’s lone marker as the Colts were officially eliminated from postseason contention suffering their fourth straight loss. Mack Guzda turned aside 17 of 18 to get the win as the 30-30-4-2 Attack locked up sixth place in the Western Conference and now prepare for a first round playoff matchup with either the Sault Ste. Marie Greyhounds, Guelph Storm or Saginaw Spirit. The Colts fall to 26-36-3-1.
GAME CENTRE