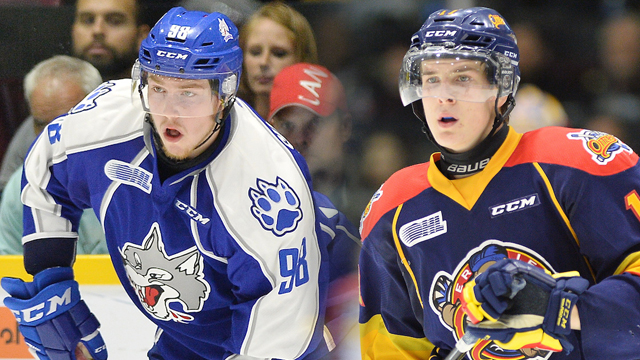 ERIE 6 NIAGARA 5
The Niagara IceDogs put on a late push, but the visiting Erie Otters would hang on for a 6-5 win as Tampa Bay Lightning prospect Taylor Raddysh (6, 7) led the way with a pair of goals and two assists. The two clubs were knotted at three midway through the third period before the Otters pulled away, taking out a 6-3 lead before the IceDogs clawed back with a pair of goals with the extra attacker. Ivan Lodnia (7) had a goal and two assists while Alex DeBrincat (9) had a goal and a helper. Other Erie goals came from Patrick Fellows (3) and Allan McShane (2). The IceDogs had markers from Matthew Philip (3), Chris Paquette (3, 4), Aaron Haydon (1) and Ryan Mantha (3) while Graham Knott had three assists. The win is Erie’s sixth straight as they improve to 7-3-0-0 for first place in the Midwest Division.
GAME CENTRE

SUDBURY 6 SAULT STE. MARIE 2
The Sudbury Wolves got the better of their northern rivals on Wednesday, defeating the Soo Greyhounds 6-2 on the road. Russian sniper Dmitry Sokolov (6, 7, 8) netted his second hat-trick of the season while Michael Pezzetta (4), Ryan Valentini (2) and Drake Pilon (2) also found the back of the net. The Wolves were outshot 42-28 as rookie netminder Jake McGrath earned second star honours with a 40-save performance. Alex Gritz (1) scored his first OHL goal for the Greyhounds while defenceman Conor Timmins (1) also buried. Sudbury improves to a Central Division-leading 7-3-1-0, their best start in 16 years.
GAME CENTRE