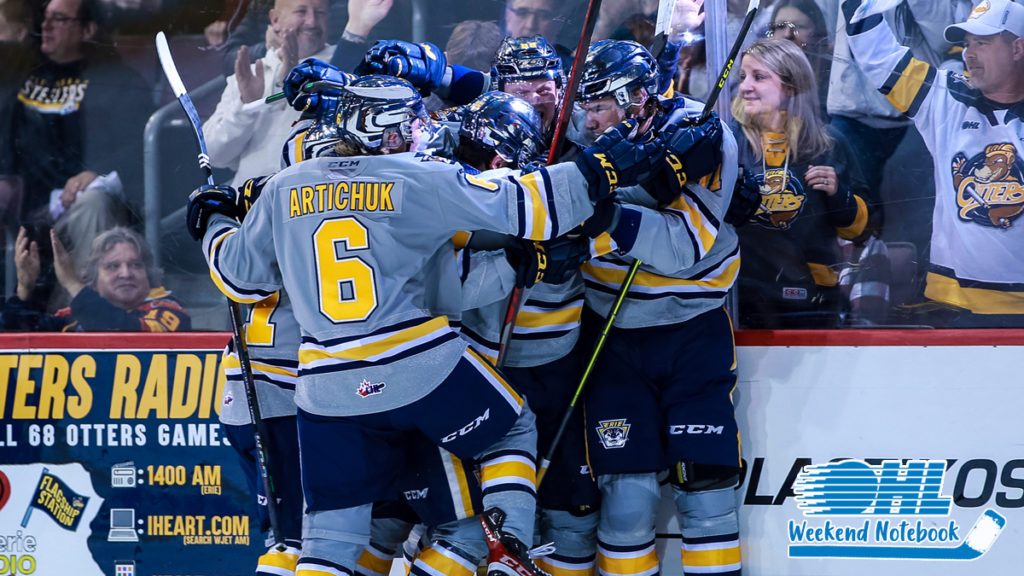 Kerins headlines explosive Greyhounds line
OHL Player of the Week Rory Kerins headlined an extraordinary performance from the Soo Greyhounds’ top line with five goals and five assists for a League-leading 10 point showing over three games. Linemate Tye Kartye wasn’t far behind with an eight-point showing along with Cole MacKay, who tacked on six points over his past two appearances. Kerins and MacKay currently sit atop the League scoring total with 14 points to their names.

After climbing into a tie for the League scoring lead with 10 points in three games, @NHLFlames prospect Rory Kerins of @OHLHoundPower is the #OHL Player of the Week. #POTW

Knights not slowing down
The London Knights kept up their winning ways, stretching their undefeated streak to 6-0 with a 2-1 edge over the Owen Sound Attack Friday night. Captain Luke Evangelista scored the shorthanded game-winning goal 1:23 into the final frame, giving him a 10-points (5-5—10) over a six-game span.

Bulldogs’ and Rangers’ streaks halted
While one win streak kept on rolling, another two were extinguished. The Hamilton Bulldogs were halted by the North Bay Battalion in a 4-2 showdown last Thursday before falling 8-2 to the Sudbury Wolves the following evening. The Bulldogs did, however, wind up in the win column to round out the weekend with a 4-2 defeat of the Mississauga Steelheads that saw a 43-save performance from netminder Marco Costantini.

The Kitchener Rangers met the same fate Sunday afternoon when they fell 4-2 to the Guelph Storm, effectively ending their undefeated run.

Gushchin gets going
Niagara IceDogs first-year forward Danil Gushchin emerged from the weekend with an explosive nine points over his three-game weekend. The San Jose Sharks forward notched his first career hat-trick Thursday night as part of a five-point showing that led the IceDogs to an 8-5 takedown of the Barrie Colts. He followed it up with a three-point performance the following night with a hand in all three of his team’s goals though his team came up short, and capped off the weekend with an assist in a 4-2 win over the Steelheads.

…and here’s one for the @SanJoseSharks fans! 🦈@OHLIceDogs forward Danil Gushchin finds the empty net to cap off his first career #OHL hat-trick 🎩🎩🎩 pic.twitter.com/CLe4op1OCB

Ottawa’s wild comeback in Oshawa
The 67’s skated out of the weekend on an exciting note, erasing a 3-0 deficit to defeat the Eastern Conference rival Oshawa Generals 5-4 in a shootout.

Down 3-0 midway through the third period thanks to a pair of goals from Boston Bruins prospect Brett Harrison, the Barber Poles scored three times in 59 seconds before rookie defender Matthew Mayich put them ahead with his first OHL goal just over a minute later. Ryan Gagnier responded to tie things up once again before Ottawa’s Brenden Sirizzotti ultimately scored the shootout winner.

A back-and-forth tilt with the Saginaw Spirit went to extra time where overage forward Brendan Sellan scored the overtime winner on a successful penalty shot.

Oster off to a solid start
Jacob Oster wrapped up the weekend with a pair of wins under his belt; a performance that earned him OHL Goaltender of the Week recognition.

The rookie Guelph Storm netminder turned aside 35 of the 36 shots he faced opposite the Sarnia Sting Friday night, helping his team to a 2-1 road victory before totalling 14 saves in Sunday afternoon’s 4-2 defeat of the Midwest rival Rangers. Oster now holds three wins in his first four OHL appearances.

Following a pair of wins, @Storm_City rookie Jacob Oster is the #OHL Goaltender of the Week. #GOTW

Hat-tricks galore
The past weekend saw hats flying across the League, starting with a trio of trios Thursday night from Gushchin, Barrie’s Oskar Olausson and Windsor defender Louka Henault.

Finally, the first three goals off the stick of first-year Saginaw Spirit forward Dean Loukus came in a 6-4 bounce back win over the Otters Sunday afternoon.

Notable netminders
The weekend that was saw a slew of strong performances in net. St. Louis Blues prospect Will Cranley backstopped the 67’s to a 3-0 blanking of the Colts, earning his fifth career OHL shutout with a 28-save afternoon in front of a national audience on CBC Sports.

Owen Sound’s Mack Guzda stood tall with an impressive 49 saves on 50 shots in his team’s 5-1 rout of the Spitfires Saturday night. Windsor’s Pasquale Zito poked one through with eight seconds remaining to wipe out Guzda’s shutout.

Marco Costantini recorded 43 saves between the Bulldogs’ pipes Sunday afternoon, helping the team in front of them to their 4-2 road victory past the Steelheads.

Another look at @WillCranley70‘s perfect afternoon 👀@StLouisBlues prospect turned aside all 28 shots in Barrie for his fifth career shutout with @Ottawa67sHockey 🎥 pic.twitter.com/oJjkUIoaaX

Tullio treading along nicely
It was a tough weekend for the Generals, but captain Ty Tullio has been anything but disappointing. The Edmonton Oilers prospect joined the League-leading 14-point club, a feat he currently shares with a pair of Greyhounds forwards in Kerins and MacKay. Tullio contributed six points (2-4—6) over his three weekend appearances and has yet to be kept off the scoresheet in his eight-game start to the season.

Last night he showed off his hands, tonight he shows off his SHOT!@TylerTullio with an absolute BEAM for his third of the season!#OSHvsNIA pic.twitter.com/bW4WU0RTXv