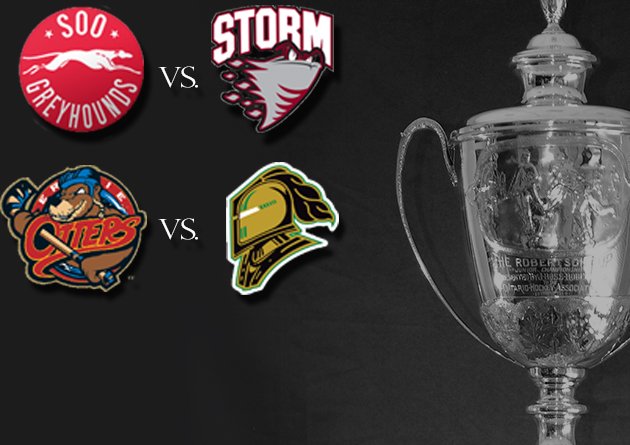 After sending a total of 169 shots on the Saginaw goal in a 4-0 first round series sweep of the Spirit, the Sault Ste. Marie Greyhounds are firing on all cylinders heading into their second round series with the Guelph Storm. After scoring 22 goals in four games, the Greyhounds aren’t overlooking the reigning OHL Champions.

“They won a championship last year and eight of their players are returning from that team,” Greyhounds forward Michael Bunting told the Sault Star’s Mike Verdone. “Obviously they’re going to be pretty good. We’ll definitely have to bring our best.”

The Hounds were led offensively in the first round by Anaheim Ducks prospect Nick Ritchie who had three goals, five assists and eight points in four contests. Along with Ritchie though, were five other Greyhounds with at least a point-per-game.

The Greyhounds, who struggled with discipline in their first round series with Saginaw, know that things will have to change against Guelph’s elite group of forwards.

“We’ve spoken a lot about how that we’d be less likely to get away with such things,” Head Coach Sheldon Keefe told the Sault Star. “The Storm have elite forwards that are “every bit as good as any player we have on our team, and they are game breakers.”

Elite forwards, and a goaltender that has developed a knack for big game performances come playoff time.

Storm netminder Justin Nichols is the Vaughn CHL Goaltender of the Week after posting a 2.41 goals against-average and .932 save percentage in a 4-1 first round series victory over the Owen Sound Attack. Nichols was arguably Guelph’s most valuable player, making 48 saves for a 3-2 overtime win in Game 4 and an additional 28 in Saturday’s 2-1 victory in Game 5 on Saturday.

Storm Head Coach Bill Stewart knows he’ll need his goaltender as well as his depth players to be at their best against the top offense in the OHL during the regular season.

“You don’t have to be a mathematician to know how good they are,” Stewart told the Guelph Mercury’s Tony Saxon. “They’re a very deep team: four guys with 30 goals and 10 guys with at least 20 goals. The only way we can up the pace is if our depth players come to the party. You can’t beat them just running three lines. That’s impossible,” Stewart added.

The Storm face quite the task going into Sault Ste. Marie to start the series against a Greyhounds team that played to a 31-2-0-1 mark on home ice this season.

With returning Champions that include Robby Fabbri, Jason Dickinson and Tyler Bertuzzi, the Storm feature a cast of experienced veterans that won’t back down from a challenge.

All games are available on the OHL Action Pak as part of the Rogers Super Sports Pak as well as OHL Live.

Those with a good memory will recall that the Erie Otters and London Knights have had their share of intense playoff encounters. From Steve Valiquette’s outstanding goaltending performance in a losing cause in 1998, to Carlo Colaiacovo scoring the final goal at the London Ice House in 2002, the Otters and Knights have shared some close battles over the years. In good news for hockey fans, this one could potentially be the best series yet.

Connor McDavid, Dylan Strome, Alex DeBrincat and the Otters meet the firepower of Max Domi, Mitchell Marner and Christian Dvorak in a series that pits two of the most exciting offensive clubs in the league against one another.

OHL Rookie of the Year Alex DeBrincat and the Otters come off a 4-1 first round series victory over the Sarnia Sting. While McDavid and Strome both enjoyed strong offensive series’, mid-season acquisitions in Jake Marchment and Remi Elie were also integral parts of Erie’s first round success with six and five points respectively.

For Elie, a second round pick of the Dallas Stars in 2013 and former OHL Champion with the London Knights that same year, meeting his old club in the postseason is a thrill.

“It’s an amazing opportunity to be in the playoffs. It’s going to be an amazing memory,” Elie told Victor Fernandes of GoErie.com. “Nothing is going to be easy throughout every round,” he added. “We just have to keep working hard. Hard work is going to pay off.”

While it’s easy to look at the Otters and see the ‘big three,’ depth is a big strength of this Erie club that also features highly touted Buffalo Sabres prospect Nick Baptiste and a solid blueline that includes the physical presence of Kurtis MacDermid along with effective puck movers in Darren Raddysh and Travis Dermott.

With five straight losses to the Otters during the regular season in the back of their minds, the London Knights aren’t flinching at the tought of a playoff duel with Connor McDavid and company.

“We’ve established ourselves (by knocking out the Rangers),” London captain Max Domi told Ryan Pyette of the London Free Press. “We’re not looking into anything else but getting better as a team every day, and that’s what we’ll continue to do. We’ve had belief since training camp and I’ve been saying that over and over all year. We have a good team and we believe in it.

“When you believe in yourselves, you can go a long way.”

The goals have continued coming for the Knights who feature OHL Playoff leading scorer Mitchell Marner who put up eight goals, seven assists and 15 points in six games against Kitchener.

The Otters and Knights had the number one and two powerplays in the league respectively this past season, a strength both clubs have carried over into the postseason.

Perhaps the most intriguing aspect of this series will be the goaltending matchup. Nineteen year-old Otters veteran Devin Williams duels Knights 17 year-old rookie Tyler Parsons who’s latest effort was a 30-save shutout against Kitchener.

Both goaltenders will no doubt face their fair share of high quality scoring chances in this series between two of the league’s most creative teams.

All games are available on the OHL Action Pak as part of the Rogers Super Sports Pak as well as OHL Live.

Watch all of the action online with OHL LIVE using your PC, mobile, or tablet device with new playoff and team packages available.