When Hockey and Popular Culture Collide 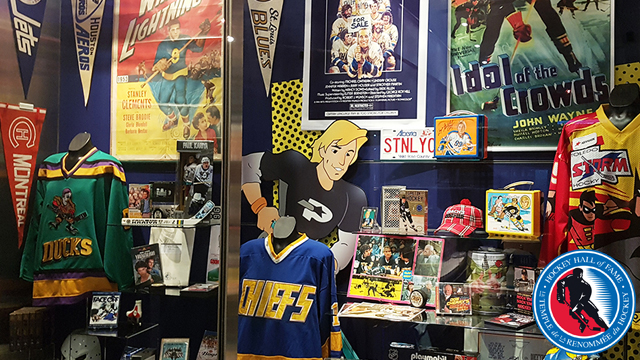 The worlds of sport and popular culture have always found a way to intersect. Hockey specifically has been no different. The Hockey in Popular Culture Exhibit at the Hockey Hall of Fame shines a light on some of the ways that hockey has crossed over into popular culture throughout the years, offering a one-of-a-kind glimpse at the way our game has been depicted in film, television, music, literature and more.

On the big screen, the Hanson Brothers were “putting on the foil” in the cult classic movie Slap Shot in 1977 and unforgettable lines from the film are still repeated in dressing rooms today. Dating back even further, legendary actor John Wayne portrayed a hockey player in the film Idol of the Crowds. An NHL franchise was even inspired by a popular movie, with the Mighty Ducks of Anaheim joining the league in 1993, owned then by The Walt Disney Company.

In an episode of the long-running television program The Simpsons, Bart became a hockey star. His sister, Lisa, then proved it ran in the family when she emerged as a goaltending sensation for a rival team. The two would eventually face off for the city championship. On Seinfeld, Jerry and friends attended several New York Rangers vs New Jersey Devils NHL games, with one friend even painting his face in the colours of the Devils.

In our latest exhibit, we take a look at the love of hockey beyond the rink. Hockey In Pop Culture is now showing at the #HHOF pic.twitter.com/Fyoog70a6U

Hockey has also been a popular theme among songwriters and musicians. Hardly a game goes by that you won’t hear Stompin’ Tom Connors’ Canadian classic The Hockey Song, and fans sing along with delight. It serves as a piece of Canadiana that brings us all together. The Tragically Hip have often referenced hockey in their music. 50 Mission Cap is a tribute to tragic Toronto Maple Leafs hero Bill Barilko and Fireworks refers to the 1972 Summit Series. These and other examples are true indicators of the band’s love for Canada’s favourite frozen pastime.

Perhaps no book has captured Canada’s passion for hockey better than Roch Carrier’s The Hockey Sweater, an iconic tale of a young Montreal Canadiens fan who mistakenly receives a Toronto Maple Leafs sweater as a gift. The book so impacted the Canadian psyche that a line from the story was included on the 2001 five-dollar bill. Appearing in both English and French, it read, “The winters of my childhood were long, long seasons. We lived in three places – the school, the church and the skating rink – but our real life was on the skating rink,” and was accompanied by images of children playing hockey.

The Hockey in Popular Culture Exhibit will make you smile, evoking memories of hockey games past and remind you of personal links to the game you thought were forgotten. Showcases of hockey cards and memorabilia are sure to rekindle a child-like love for the sport. Then again, it may also make you wince, remembering the items you collected as a youngster that long ago found their way into yard sales or torn on the spokes or your bicycle!

Contributed to ontariohockeyleague.com by Joshua Dawson. 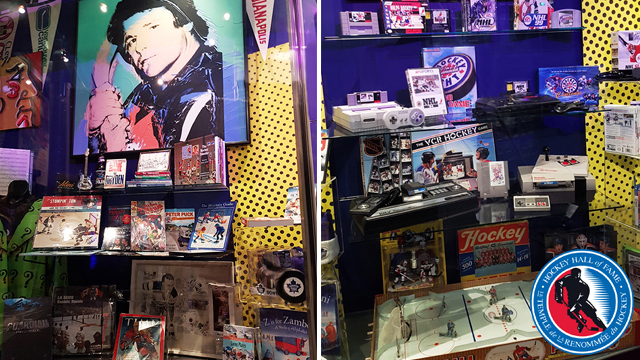 The Hockey Hall of Fame is a proud partner of the Ontario Hockey League.