Will Petschenig Named OHL Humanitarian of the Year 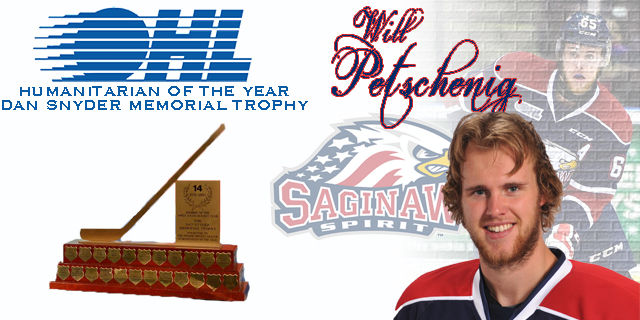 Toronto, ON – The Ontario Hockey League today announced that defenceman Will Petschenig of the Saginaw Spirit is the 2015-16 recipient of the Dan Snyder Memorial Trophy awarded annually to the OHL’s Humanitarian of the Year.

Petschenig, a 21-year-old from Manotick, ON, made an immediate and lasting impact in the Saginaw community as a member of the Spirit during the 2015-16 campaign creating the program “A Heart Like Mine” with the hope of reaching out to children and families who are grieving the loss of a loved one.

“On behalf of the Children’s Grief Center of the Great Lakes Bay Region and the Saginaw Spirit, I am honoured to receive the Dan Snyder Memorial Trophy for OHL Humanitarian of the Year,” said Petschenig. “I would like to thank Charley Porter and the Spirit staff for sharing my vision with “A Heart Like Mine” and Camille Nitschky from Children’s Grief Center for giving me the opportunity to meet some great kids. When we started “A Heart Like Mine”, I wanted to do something to honour my dad, and making kids happy was the best way I could do that. I will continue to stay in contact with the kids and be there for them if they need me. Seeing the kids happy and smiling is what makes me happiest.”

In October, 2013, Petschenig lost his father, Dan, who passed away suddenly at the age of 50.  To honour his father, “A Heart Like Mine” was started to share and create memories with others by offering families the opportunity to enjoy a Spirit game.  Throughout 2015-16, Petschenig personally invited over 30 families to share a unique VIP experience that included free tickets, a pregame dinner with Will, watching warmup from the Spirit bench, access to a behind the scenes tour, Zamboni ride, and a post-game meet-and-greet with Will and his teammates.  Petschenig developed friendships and memories with over 50 kids, ‘Will’s Warriors’, sharing an unfortunate common bond through his program and in his countless hours volunteering at the Great Lakes Bay Region Grief Center.

A four-year OHL veteran, Petschenig joined the Spirit in September and was named alternate captain after playing three seasons with the Oshawa Generals where he captured a Memorial Cup title in 2015.  He finishes his OHL career having played in 233 regular season games collecting 11 goals and 48 assists for 59 points including a career-high 22 points in 68 games with the Spirit.  As a member of the Generals, Petschenig was a two-time nominee for the Dan Synder Memorial Trophy.

“On behalf of the entire Saginaw Spirit family, we congratulate Will and his courageous Warriors for winning this award,” said Spirit President and Managing Partner Craig Goslin. “Will exhibits his passion for helping others in so many things he does and has strong values in the overall manner that he makes decisions in his life. We are all very proud of Will and look forward to working with him well into the future, to pass on and continue to help the “Will’s Warriors” kids and “A Heart Like Mine” project.”

Petschenig becomes the first member of the Spirit to earn the award.  Past recipients include Chris Terry and Ryan Hayes who represented the Plymouth Whalers with back-to-back awards in 2009 and 2010 respectively, before Jack Walchessen and Andrew D’Agostini of the Peterborough Petes won in 2011 and 2012.  Ben Fanelli (Kitchener 2013), Scott Simmonds (Belleville 2014), and Nick Paul (North Bay 2015) are the most recent award recipients.

The 2016 OHL Awards Ceremony takes place on Tuesday June 7 at the Hockey Hall of Fame in Toronto where Petschenig will be formally presented with the Dan Snyder Memorial Trophy.  He will also be the OHL’s nominee for Humanitarian of the Year at the annual CHL Awards presented on Saturday May 28 at the 2016 MasterCard Memorial Cup in Red Deer. 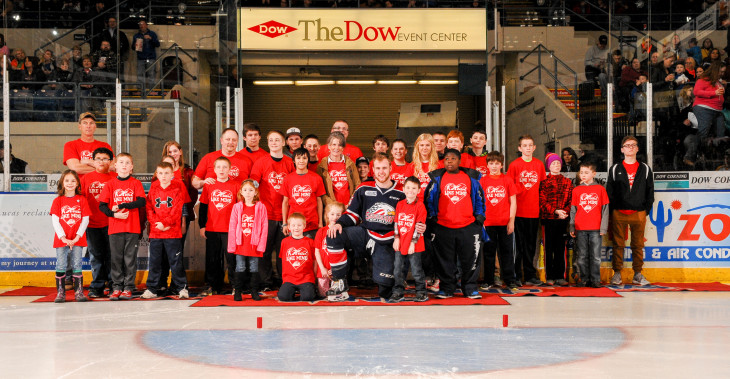