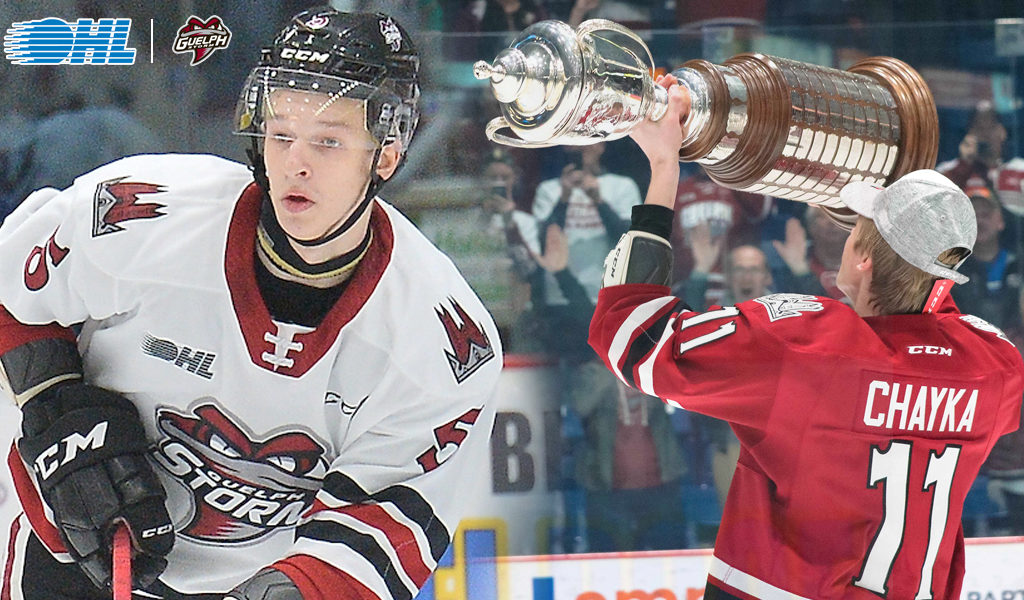 He hasn’t turned 17 yet, but Guelph Storm defenceman Daniil Chayka already has one of the more impressive trophy cases in the Ontario Hockey League.

Winning has followed the 6-foot-3, 179Ib defenceman wherever he’s gone over the past three seasons, starting in Russia when he was a 14-year-old and won the league’s U16 Championship as a member of CSKA Moscow.

Chayka came to Canada for the 2017-18 season and hoisted the OHL Cup as a member of the Toronto Jr. Canadiens, scoring arguably the biggest goal of the showcase in overtime of the semi-final to eliminate the heavily favoured Toronto Marlboros and advance to defeat the Vaughan Kings in the big dance.

Last year Chayka won three major championships, capturing gold as a member of Russia’s World Under-17 Hockey Challenge squad, an OHL Championship as a rookie on the Storm blue line and finally a Hlinka Gretzky Cup title this past August.

“I guess it has worked out well for me,” said Chayka, who in just his third year in Canada has taken big steps with the English language. “There is nothing better than winning and I’ve been on some really good teams.”

The Moscow native greatly benefitted from playing on a Storm club that also featured countrymen Dmitri Samorukov, Alexey Toropchenko, Pavel Gogolev and big defenceman Fedor Gordeev who also has a grasp of the Russian language. The Russian contingent made him feel right at home as he got his OHL career off on the right foot, recording 14 points (5-9–14) over 59 games while recording a plus-21 rating.

“I have learned a lot of English, but it is always great when you have guys you can speak Russian with,” said Chayka. “I have known Samorukov for a long time because we went to the same school back in Moscow. It was kind of like having a big brother around on and off the ice. He helped me a lot to understand words and the way things go in the OHL.”

The seventh overall pick of the 2018 OHL Priority Selection, Chayka didn’t take long to adjust to the OHL pace, stringing together four points through his first five games last fall. Storm head coach and general manager George Burnett, who has embarked on his 23rd campaign as an OHL bench boss, saw Chayka’s game grow over the course of last season.

“He played a big role with our club throughout parts of the season when we had some injuries and was able to be in the lineup throughout the playoffs, playing under experienced guys like Samorukov, Durzi and Phillips. I think he learned a lot through that process and is ready to take on more critical minutes now.

“He’s gotten bigger and stronger,” Burnett added. “I think he’s eager to be a guy who is out on the ice with the game on the line.”

Chayka, who cites OHL graduate Brent Burns of the San Jose Sharks and first overall 2018 NHL Draft selection Rasmus Dahlin of the Buffalo Sabres as a pair of his favourite defencemen, has played on enough highly successful teams that he’s able to summarize some of the key elements of a winner in a few words.

“I think one of the things that is the same about all of them is how close the guys are to each other,” he said. “Everyone is on the same page and wants to work hard and get better. I think you have to do a little bit of the extra stuff and push to be the best. It doesn’t just happen without the work.”

Congratulations to @daniilchayka55 and Team Russia for winning Gold at the Hlinka Gretzky Cup! 🥇 #IamtheSTORM pic.twitter.com/ZXudLUklEr

A significantly younger and less experienced Storm squad is off to a 1-1-0-1 start to the new season, with Chayka and fellow Russian product Andrei Bakanov each picking up three points along the way. The Storm also added another player with Russian roots, selecting high-scoring Toronto Marlboros forward Danny Zhilkin with the 14th pick of the 2019 OHL Priority Selection.

Though he’s only 16, Chayka will see consistent minutes in the Storm’s top four alongside veterans Gordeev, Owen Lalonde and recently acquired overager Josh Wainman. He’ll be thrown into some bigger situations and tested against some of the league’s top veterans, but unfortunately for the many NHL scouts in attendance to see the big Russian rearguard, he isn’t draft eligible until 2021.

Chayka and the Storm return to action this weekend when they host the Flint Firebirds on Friday and visit the Sarnia Sting on Sunday.