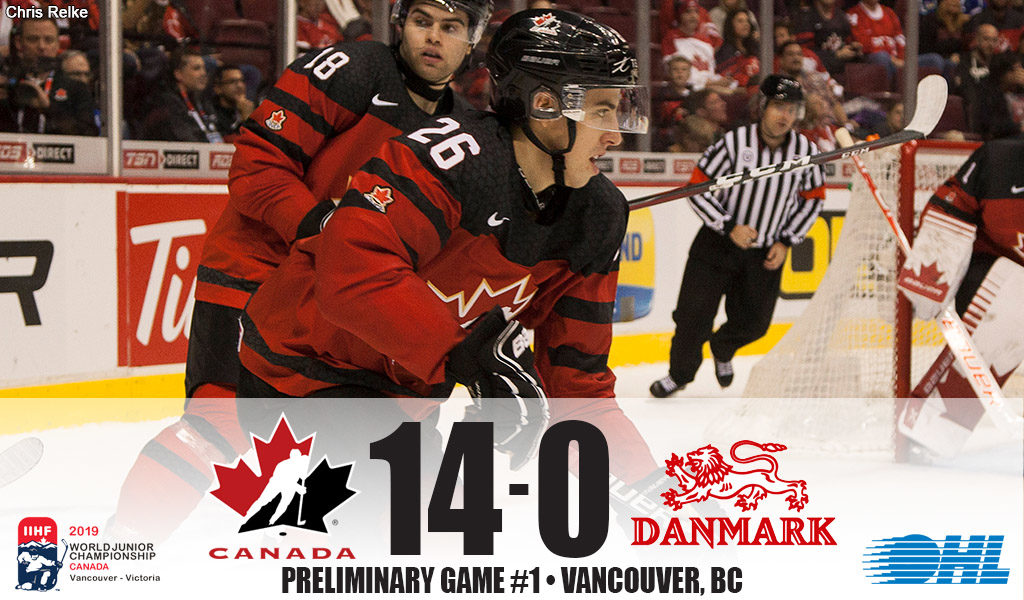 The 2019 IIHF World Junior Hockey Championship got underway in Vancouver and Victoria, BC on Boxing Day, with Canada, the United States, the Czech Republic and Sweden claiming victories. Here’s a look at Day 1 action from Wednesday.

CANADA 14, DENMARK 0
For the first time in 26 years, two Canadians had hat-tricks in the same game at the World Junior Hockey Championship as Canada kicked things off with a commanding 14-0 win over Denmark at Rogers Arena in Vancouver, BC.

“Right from the get-go, he [Maxime Comtois] led the team,” said head coach Tim Hunter. “I talked to the team after the second period and said ‘You guys determine how you finish this game off because you’re going to play, not me.’ I was proud of the way they finished the game off and didn’t deviate, so he’s a big part of that.”

“I think we cleaned up the little details that were lacking in the game against Finland, we played a full 60 minutes and everyone was going tonight,” Frost said. “We definitely prepared well for the game and every game brings a new challenge, so now we’ll focus on the next game, continue to play the way we did tonight and carry that momentum on.”

When all was said and done, Canada outshot Denmark 45-14 as goaltender Michael DiPietro (Ottawa 67’s) recorded the shutout.

Ian Scott (Prince Albert Raiders) will get the start on Thursday as Canada looks to build off a strong start, taking on Switzerland at 8pm ET/5pm PT.

UNITED STATES 2, SLOVAKIA 1
Trailing 1-0 entering the first period, the United States got a pair of quick goals from Mikey Anderson and Evan Barratt to climb ahead of their Slovakian counterparts for good in a 2-1 victory in Victoria, BC.

Samuel Hlavaj turned aside turned aside 32 shots for the Slovaks, keeping his team in the game despite being outshot 34-14.

Marek Korencik scored Slovakia’s lone goal 7:17 into the second period before their lead came undone in the third.

Boston Bruins prospect Kyle Keyser (Oshawa Generals) turned aside 13 of the 14 shots he faced to record the win for the United States.

The Americans are in the hunt for their fifth-ever gold medal this year after last capturing world supremacy two years ago in Toronto and Montreal.

CZECH REPUBLIC 2, SWITZERLAND 1 – OT
David Kvasnicka scored 52 seconds into overtime to give the Czech Republic a 2-1 tournament-opening victory in a hard-fought matchup against Switzerland. Boston Bruins prospect Jakub Lauko (Rouyn-Noranda Huskies) picked up an assist on the game winner as the Czechs overcame a determined effort from a hard-working Swiss squad.

Kvasnicka’s overtime winner came on a low wrist shot through traffic as the Czechs got off to a positive start as they seek to return to the podium at the World Juniors for the first time since 2005.

SWEDEN 2, FINLAND 1
Vegas Golden Knights prospect Erik Brannstrom scored twice from the back end, guiding Sweden past neighbouring rival Finland by a score of 2-1 in Victoria, BC.

Adam Boqvist (London Knights) picked up assists on both goals before Finland’s Aarne Talvitie made things interesting, putting Finland on the board with 3:34 left in regulation.

Finnish netminder Ukko-Pekka Luukkonen (Sudbury Wolves) made 28 saves in the loss across from Samuel Ersson who backstopped Sweden to victory.