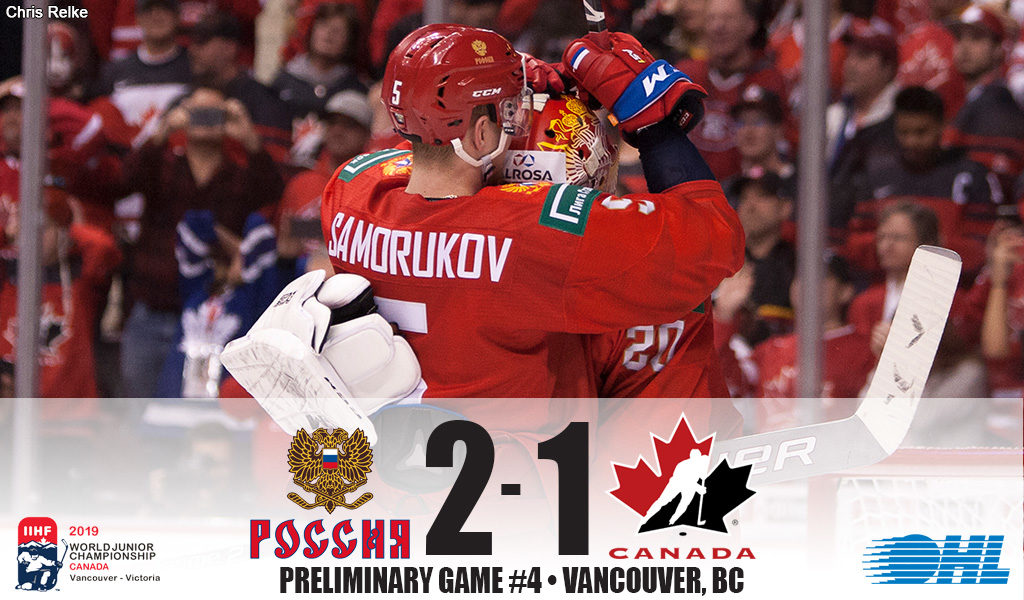 Russia prevailed in a hard-fought matchup against Canada while the United States, Sweden and the Czech Republic are also headed into Wednesday’s quarter-final action off victories. Here’s a look at New Year’s Eve action from Vancouver and Victoria.

RUSSIA 2, CANADA 1
A showdown of undefeated teams went Russia’s way on New Year’s Eve in Vancouver as Boston Bruins prospect Pavel Shen scored the game winner with nine minutes remaining to give his country a 2-1 victory over Canada.

“We’ve gotten better every day, [and] every game. We lost today, but we still got better,” said head coach Tim Hunter. “We’re going to learn a lesson from this game and it still makes us a better team, so we’re building chemistry and camaraderie. We’ve become a real tight group and guys really care about each other. As we move along that’s only going to get better and bigger.”

Montreal Canadiens prospect Alexander Romanov picked up the assist on the game winner while netminder Pyotr Kochetkov turned aside 30 shots, helping Russia improve to 4-0-0-0 and capture top spot in Group A.

“I felt pretty comfortable, but there’s definitely areas of my game I can polish up,” said goaltender Michael DiPietro. “It’s not about me, it’s about the team, the result and winning. We came up short tonight, but we all have to be better. We hold ourselves to a high standard, we strive for perfection each day and coach’s message was good to us, it was motivating and something we can build off of. Adversity is good for our group, especially heading into games that really count.”

Vegas Golden Knights prospect Cody Glass (Portland Winterhawks) opened the scoring for Canada just 2:20 into the first period with an assist from Owen Tippett (Florida Panthers). Russia responded three minutes later though as Panthers first round pick Grigori Denisenko connected with Vitali Kravtsov and Dmitri Samorukov (Guelph Storm) on the power play to tie the score at one.

“I think when we push the pace, it makes any team sit back and see what’s coming for them,” Tippett said. “We have the speed and physicality to play with any team and we know that if we push the pace it’s going to be a lot easier for us to play.”

Goaltenders Kochetkov and Canada’s DiPietro (Ottawa 67’s) came up big on a number of occasions in this one before Russia punched its ticket to a quarter-final matchup with Slovakia on Wednesday while Canada will face Finland.

UNITED STATES 4, FINLAND 1
Dallas Stars prospect Jason Robertson (Niagara IceDogs) opened the scoring and the United States never looked back, defeating Finland 4-1 in Victoria, BC to set up a quarter-final date with the Czech Republic on Wednesday.

Tyler Madden scored twice and Ryan Poehling also tallied as the Americans made the most of their opportunities, improving to 3-0-1-0 at the 2019 World Juniors.

Jesse Ylonen scored Finland’s lone marker with 6:44 left in regulation as they fell to 2-0-0-2 in preliminary play and will square off with Canada in Wednesday’s quarter-final action.

CZECH REPUBLIC 4, DENMARK 0
Jakub Lauko (Rouyn-Noranda Huskies) and Filip Kral (Spokane Chiefs) both had goals to lead the Czech Republic past Denmark 4-0 and into Wednesday’s quarter-finals.

Martin Necas and Martin Kaut also found the back of the net while goaltender Lukas Dostal stopped all 20 shots he faced. The Czechs outshot the Danes 34-20 as Mads Sogaard (Medicine Hat Tigers) made 30 saves in defeat.

Denmark wraps up the preliminary round 0-4, failing to score a goal in the process as they return to the Relegation Round where they’ll face Kazakhstan in a best-of-three set.

The Czech Republic owns a 1-1-0-2 record and will face the United States in quarter-final action on Wednesday.

SWEDEN 4, KAZAKHSTAN 1
Sweden wrapped up an undefeated preliminary round, capturing Group B with a 3-1-0-0 record following a 4-1 win over Kazakhstan.

Former Sault Ste. Marie Greyhounds defenceman Rasmus Sandin had two goals and an assist from the back end while Emil Bemstrom, Nils Lundkvist also lit the lamp as the Swedes outshot Kazakhstan 56-11.

Sweden advances to Wednesday’s quarter-final to take on Switzerland.

Kazakhstan finishes with an 0-0-0-4 record and will take on Denmark in Relegation Round play with a three-game set beginning on Wednesday.